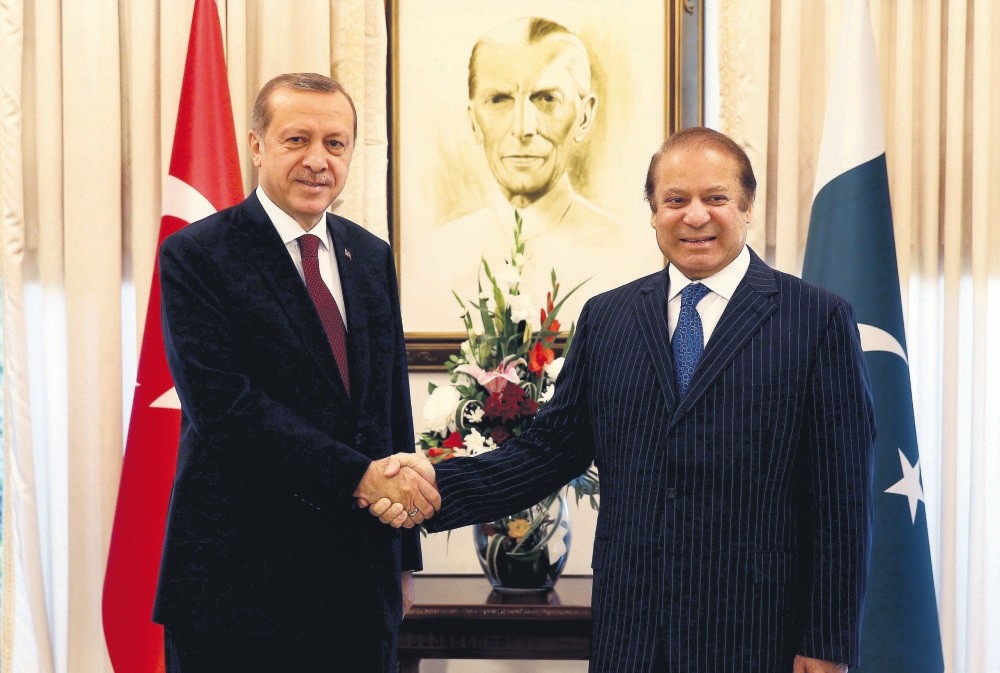 President Erdou011fan (L) meets with Pakistanu2019s PM Sharif in Islamabad Thursday.
by daily sabah Nov 18, 2016 12:00 am
Pakistani Prime Minister Muhammad Nawaz Sharif said Thursday that he aims to finalize and sign a free trade agreement with Turkey before the New Year. President Recep Tayyip Erdoğan is on an official visit to Pakistan with a business delegation accompanying him.

During the joint press conference following the one-to-one delegation meeting held with Erdoğan at the Prime Ministry building, Sharif said relations between the two countries date back to a deep-rooted past. Stressing that he held a very inclusive meeting with President Erdoğan, Sharif said they decided to turn current relations into a strategic partnership by mainly focusing on its economic dimension, establishing the foundation of this economic cooperation on solid ground by taking important steps especially in the fields of trade, mutual investment and economy. He stressed that both parties agreed on the completion of the free trade agreement expected to be signed between the two countries before 2017.

President Erdoğan said they aim to increase the trade volume to $1 billion as soon as possible, adding that Turkey and Pakistan should develop and "walk to the future" in accordance with the "win-win" principle by taking crucial steps together in the fields of politics, military, economy, culture, energy, infrastructure and superstructure. Highlighting that the close dialogue that was established between the parameters of the two countries should be maintained in the coming period, Erdoğan urged both sides to strengthen cooperation in both trade and investment, pointing out that the continuation of the cooperation between Turkey and Pakistan is getting stronger day by day will and set an example for the Islamic world.

Erdoğan also said that the 51 agreements and documents signed under the scope of the council will be put into effect as soon as possible and "serious progress" will be be made.
RELATED TOPICS