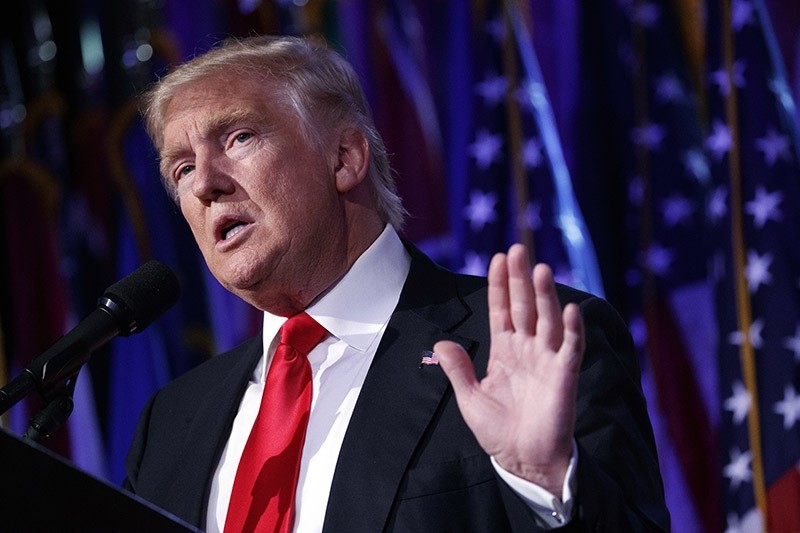 President-elect Donald Trump speaks during a rally in New York. Nov. 9, 2016. (AP Photo)
by German Press Agency - DPA Nov 22, 2016 12:00 am
Donald Trump will begin to withdraw the United States from the Trans-Pacific Partnership trade deal on his first day in office, the president-elect said on Monday.

Calling the 12-nation agreement "a potential disaster for our country," Trump said he would file a notification of intent to withdraw from the deal pushed by President Barack Obama as soon as he takes office on January 20.

Instead, Trump said he would pursue "fair" bilateral trade agreements.

In a video updating the American people on his transition planning for the White House, Trump said his team was "working very smoothly, efficiently and effectively."

"Truly great and talented men and women, patriots indeed, are being brought in and many will soon be a part of our government helping us to make America great again."

Trump said he would also begin his administration with executive orders cancelling restrictions on energy production, including shale and clean coal; require the abolishment of two regulations for each new regulation created; order the Defence Department to develop a plan against cyber-attacks; and order the investigation of abuses to visa programmes and institute a five-year ban on lobbying by former administration officials.
Last Update: Nov 22, 2016 4:42 pm
RELATED TOPICS