Exchange rate pressure can be released with gold, Erdoğan suggests 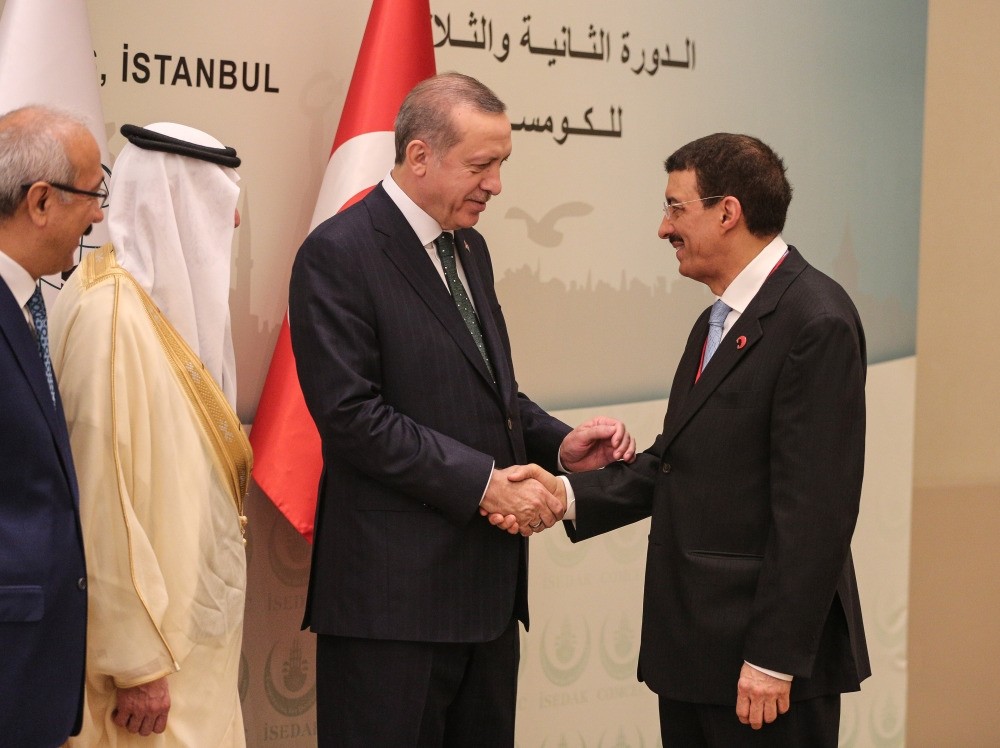 President Erdou011fan (C) shakes hands with Chairman of Islamic Development Bank Bandar Hajjar during the 32nd Meeting of Standing Committee for Economic and Commercial Cooperation of the Organization of the Islamic Cooperation in Istanbul Wednesday.
by daily sabah Nov 24, 2016 12:00 am

As many currencies around the globe suffer with the rising trend of the U.S. dollar, President Erdoğan suggested the currencies to be converted into gold, to release the pressure of the exchange rate on them

President Recep Tayyip Erdoğan (R) has said that the size of the global Islamic finance market reached $2.1 trillion in 2015 and that the currencies therein should be converted to gold, removing pressure on them. Speaking at the opening session of the 32nd Meeting of the Standing Committee for Economic and Commercial Cooperation of the Organization of the Islamic Cooperation (COMCEC), held at the Istanbul Congress Center, President Erdoğan said Islamic countries have to make themselves more resistant to global crises, suggesting Islamic finance as a solution, along with its asset-based approach and emphasis on ethical principles.

Pointing out the importance of taking steps to remove the pressure of international exchange rates, Erdoğan stressed that a participatory finance approach and a gold-indexed step in currency would be the right move, recalling that the volume of the Islamic finance market grew by 15 percent on average annually from 2009 to 2015 and that the size of global Islamic financing reached $2.1 trillion in 2015.

Urging the Islamic world to convert their currencies to gold, Erdoğan said the potential size of such a system is estimated to be around $7 trillion, much higher than the current figure. "I find it quite appropriate that this year's ministerial communion session's theme was 'the development of Islamic finance strategies in member countries.' This issue needs to be discussed here," Erdoğan said.

President Erdoğan also said he appreciated the activities of the Stock Exchanges Forum and COMCEC Capital Markets Regulators Forum, which are active in the field of financial business cooperation within the scope of COMCEC. Noting that he closely followed the projects for the establishment of the COMCEC Real Estate Securities Exchange and Gold Exchange, Erdoğan said all these projects will hopefully be completed and put into the countries' service soon.

Stating that the rate of intra-organizational trade exceeded 20 percent with a trade volume of $347 billion in 2015, Erdoğan said a 6 percent increase within the next 10 years is targeted in the new action plan, and stressed that this is a modest target. According to the president, the intra-organizational commerce rate should be 25 percent, considering the potential of the member countries in the field of trade, rather than the previous target of 30 percent. Stressing that 25 percent is not a limit, Erdoğan said that carrying it over 25 percent in the future will definitely be a statement of success.

President Erdoğan highlighted that the Trade Preferential System of the Islamic Cooperation Organization, the most important project of COMCEC in the field of trade, must now be put into action. He invited the relevant member countries to submit their current concession lists to COMCEC for the system to enter into force as soon as possible, also asking them to continue their support for the Standards and Metrology Institute for the Islamic Countries.

Recalling that he had offered to set up an arbitration center in Istanbul for the settlement of disputes during the 13th Islamic Summit, Erdoğan said he had also made the same offer at the COMCEC meeting. He advised that the Union of Chambers and Commodity Exchanges of Turkey (TOBB) and the Islamic Chamber of Commerce, Industry and Agriculture launched a project in accordance with the decision made at the 32nd COMCEC Monitoring Committee held in May this year, wishing for this project to be concluded as soon as possible.
RELATED TOPICS