Trump threats may not stop US offshoring of jobs 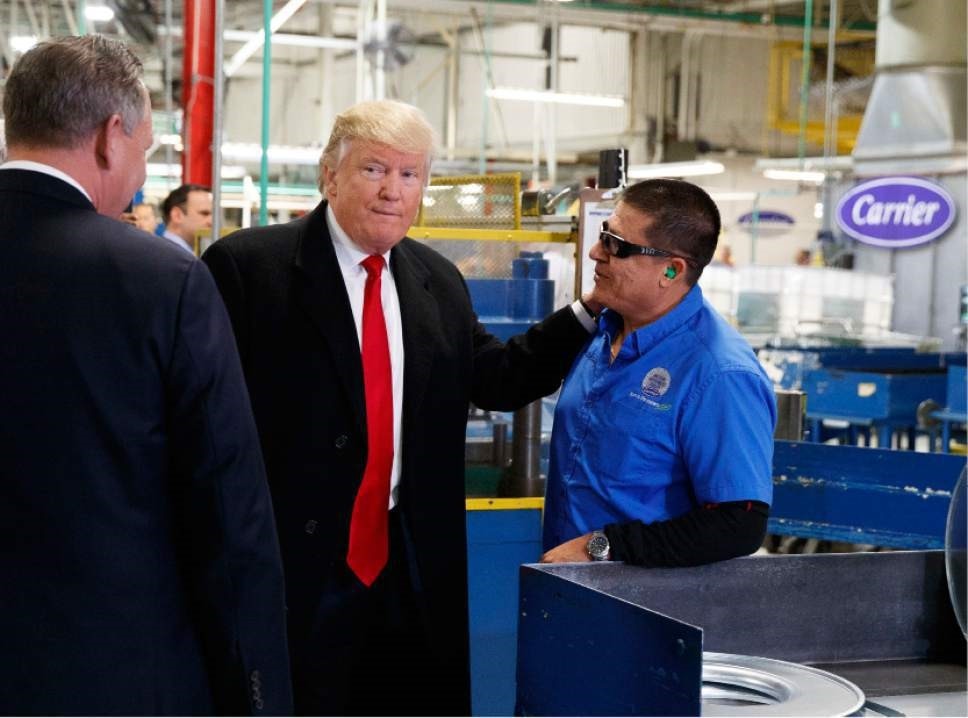 President-elect Donald Trump talks with workers during a visit to the Carrier factory, Thursday in Indianapolis.
by Dec 05, 2016 12:00 am

The president-elect's threats to retaliate against U.S. companies planning to shift operations overseas constitute a new risk for multinationals, but may not sway those already planning to offshore jobs

Donald Trump laid down the gauntlet on Thursday at a campaign-style rally after striking a deal with Carrier to keep about 1,100 jobs in Indiana in exchange for $7 million in state tax incentives over 10 years. "Companies are not going to leave the United States any more without consequences. Not going to happen," Trump told the cheering crowd.

"They can leave from state to state, and negotiate deals with different states, but leaving the country will be very, very difficult."

The president-elect did not offer details on how he planned to pressure companies to keep jobs in the United States, but one obvious lever includes the removal of government contracts.

That could make companies that work in defense, public works and public services especially vulnerable to retribution.

"Boeing, for example, would have to play ball if it wants its government contracts renewed," said one expert who requested anonymity. Trump coupled the threat with a promise to make the U.S. a better place for business by cutting taxes and streamlining regulations. "There are a lot of plans already in place," said Hal Sirkin, a manufacturing expert at the Boston Consulting Group.

"CEOs are following the news closely and trying to figure out what all of this could mean for their businesses."

Some companies said Trump's broadside was not sufficient to compel a change in plans. Caterpillar announced in March 2015 it plans to shutter a plant in Joliet, Illinois that makes oil pumps and valves, and move 230 jobs to Mexico.

"We are continuing to execute on the previously announced plan on the stated timeline," said Matt Lavoie, a spokesman at Caterpillar. Food giant Mondelez International also signaled it would proceed with plans to relocate hundreds of jobs from an Oreo cookie plant in Chicago to Mexico.

"We have not had any contact with the new administration," said Mondelez spokeswoman Laurie Guzzinati, adding that the Chicago baker remains an "important part of our manufacturing network" and that it continues to make Oreos at three U.S. factories.

Not far from Trump's victory celebration at Carrier in Indiana, the industrial companies Rexnord, CTS Corp. and Manitowoc Foodservice all plan to shift activities overseas from the Indianapolis area.

Manitowoc opted to close a plant in Sellersburg, Indiana due to a decline in demand for soda-drink dispensers, which had been made there, a spokesman said. Most of the 87 jobs are being moved to Tijuana, Mexico.

"The wind down of the plant is proceeding according to our original schedule," Manitowoc spokesman Rich Sheffer said. "Yesterday's speech did not include anything specific enough for us to reconsider our plans." Trump's plans drew mixed reviews, with United Auto Workers Union President Dennis Williams offering accolades.

"We should use this opportunity to start running a commercial: If it's not built in America, don't buy it," Williams said.

But the Alliance for American Manufacturing, an industry-labor alliance, offered tempered praise. It noted that Friday's jobs report showed a decline of 4,000 manufacturing jobs in November and called for a crackdown on "unsavory" policies of trade partners. "While on balance, I believe this week's Carrier deal was worth doing, it isn't a practical job creation policy moving forward," alliance president Scott Paul said. Senator Bernie Saunders said Trump's plans were a losing proposal, in part because Carrier will still transfer 1,000 jobs to Mexico. Trump failed to save all 2,100 jobs, as he promised, Saunders said. Carrier "took Trump hostage and won," Sanders said in an op-ed he wrote for The Washington Post. Trump "endangered" other US jobs, Sanders said, "because he has signaled to every corporation in America that they can threaten to offshore jobs in exchange for business-friendly tax benefits and incentives."
RELATED TOPICS