Economic recovery is ahead in 2017, Turkish Central Bank says 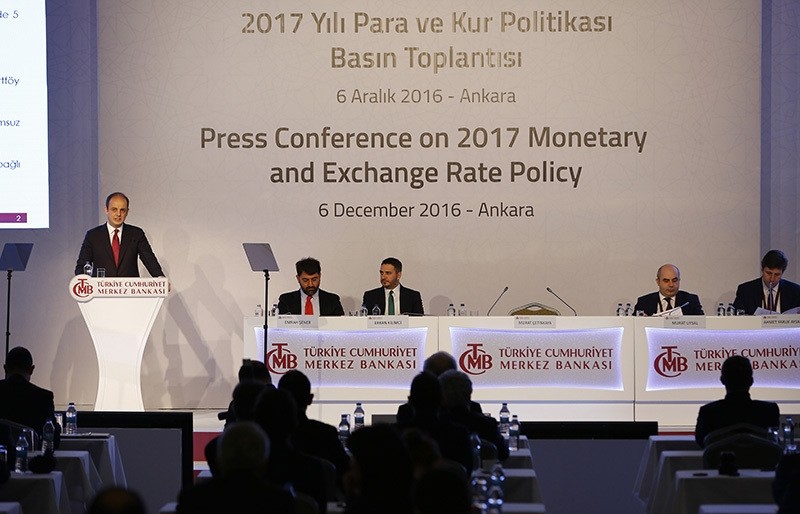 Governor of the Central Bank of Republic of Turkey (CBRT) Murat Çetinkaya has announced that the bank will continue to conduct monetary transactions in local currency during a press conference held to announce the CBRT 2017 Monetary and Exchange-Rate Policy.

CBRT Governor Çetinkaya pointed to the increased use of the Turkish lira that now makes up 6 percent of total foreign trade compared to 1 percent in early 2000. "We will continue to support the use of local currency as a medium of exchange in economic activities," the governor said.

Çetinkaya also said the CBRT had no nominal target for the foreign exchange rate. "However, sometimes, there are fluctuations in the markets. If these fluctuations have serious and permanent impacts on the essentials of the economy; namely, pricing stability, the CBRT would, naturally, not be indifferent to such developments," he added.

On Friday, President Recep Tayyip Erdoğan urged Turkish citizens to convert their foreign exchange savings into Turkish lira and gold to help boost the value of the local currency. On Sunday, the president announced Turkey had taken steps to carry out foreign trade in its national currency: "If we buy something from them [foreign countries], we will do that in their currency; if they buy something from us, they will do it in our currency," Erdoğan said, adding that Turkey will "play its own game" in the economic arena against "all games" played against it.

Economic recovery ahead in 2017

Turkey's economic activity has been making a recovery throughout the last quarter of 2016, while fluctuations in the Turkish lira will not have a "durable" impact on the economy, Governor Çetinkaya said Tuesday.

Çetinkaya said that losses surpassing 12 percent in the lira-dollar parity in November have had only a slight impact on inflation in Turkey, which has 7 percent year-on-year. He also announced that the CBRT will maintain its forecast on year-end inflation at 7.5 percent, citing a favorable outlook on food prices and moderate domestic demand despite volatility in foreign exchange markets."The bank will continue to support financial stability while aiming to keep inflation close to the target rate," he added.

Simplification process to be completed soon

Governor Çetinkaya said that the CBRT's Simplification Policy will be completed in the near future, referring to the bank's plans to change the three-level interest rate system to one flat rate. On the other hand, the governor emphasized that it is more important to focus on monetary policy than policy deadlines. In a move to contain the depreciation of the lira against the U.S. dollar, the CBRT raised its benchmark one-week repo rate by 50 basis points two weeks ago, increasing it from 7.5 percent to 8 percent during the Monetary Policy Committee meeting. In the meantime, the upper band of the interest rate corridor - the Marginal Funding Rate (MFR) - was also increased by 25 basis points to 8.50 percent. The lower upper band of the interest rate corridor remained unchanged at 7.25 percent. The decision is considered a step towards monetary simplification and a means for the CBRT to close the gap between the key interest rate and the upper band.