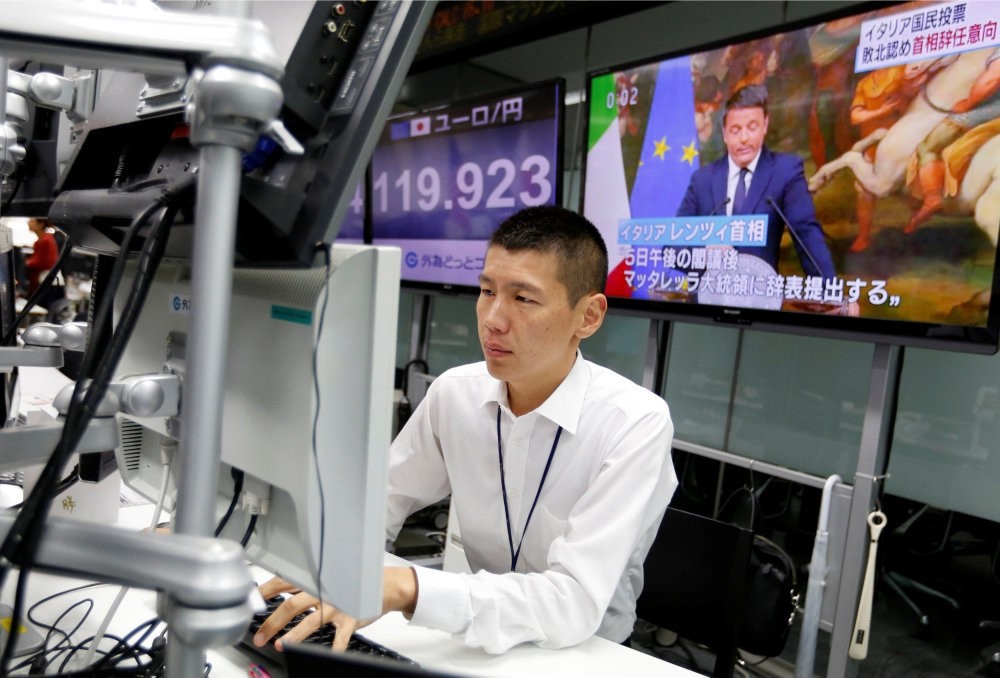 An employee of a foreign exchange trading company works in front of monitors showing Italian Prime Minister Matteo Renzi on TV news, and the Japanese yen's exchange rate against the euro in Tokyo, Japan.
by Dec 06, 2016 12:00 am

The results of Sunday's referendum in Italy sunk the euro to a 21-month low Monday. Yet, the currency regained the ground it lost following statements by rating agencies and the European Central Bank

The euro rebounded from 21-month lows Monday, clawing back almost all the ground it had lost overnight after Italian Prime Minister Matteo Renzi conceded defeat in a referendum on plans to reform the country's constitution and said he would resign.

The single currency tumbled as much as 1.4 percent in Asian trade to hit $1.0505, its weakest since March 2015, as investors worried about increased political uncertainty in the euro zone. But by 0855 GMT it had recovered almost all of those losses, trading down 0.1 percent on the day at $1.0650. The result had been widely expected, though the size of the "No" vote, at with 59.1 percent, was more emphatic than had been forecast.

"Because the vote was largely expected, there really isn't enthusiasm to push the move too far," said Societe Generale macro strategist Kit Juckes. "From here, FX will take its cue from (bond) spreads, the equity market reaction, and wait for rating agencies to opine."

Renzi's resignation could open the door to an early election next year and the possibility of the anti-euro 5-Star Movement gaining power at a time when the European Union is still reeling from Britain's vote to leave earlier this year.

Given that Renzi's Democratic Party (PD) is running neck-and-neck in opinion polls with 5-star, which has called for a referendum on Italy's membership of the euro zone, an early election would be likely to rattle investors.

Italy's 10-year government bond yield shot up as much 13 basis points to above 2 percent soon after European bond markets opened, still below a 14-month high around 2.17 percent touched in late November. By 0855 GMT it was back below 2 percent, up 6 basis points on the day.

European Central Bank sources told Reuters last week that the bank was ready to step up purchases of Italian government bonds temporarily if the referendum result were to spur a sell-off, but traders said on Monday that they had seen no evidence of the ECB in the market so far. The ECB holds its next policy meeting on Thursday.

"(The result) has marginally increased the likelihood of a crisis like in 2011 or something, but even a full-blown crisis... is not in itself something that is a meaningful burden for the euro," said Commerzbank's head of currency strategy in Frankfurt, Ulrich Leuchtmann, referring to the spiralling of Italian borrowing costs five years ago. "The only thing that would be a big burden (for the euro) is if the ECB reacts to it with more expansionary monetary policy, but ... Italian government bond spreads have reacted relatively benignly at the moment, and therefore it's relatively unlikely that the ECB will do anything big."

Some analysts said the euro was drawing some support from Sunday's presidential election in Austria, where voters roundly rejected Norbert Hofer, the candidate vying to become the first freely elected far-right head of state in Europe since World War Two.

The dollar softened on Friday as investors took profits from its recent gains following solid but unspectacular U.S. non-farm payrolls data for November, but it was up 0.2 percent against a basket of currencies yesterday. Data on Friday showed that speculators' net long positions on the greenback had risen rose to their highest since mid-January.

Elsewhere, the New Zealand dollar fell almost one percent to $0.7070 after Prime Minister John Key, who won praise for his economic stewardship after the global financial crisis, unexpectedly announced his resignation.