TL 250 bln worth credits to be introduced for SMEs, PM Yıldırım says 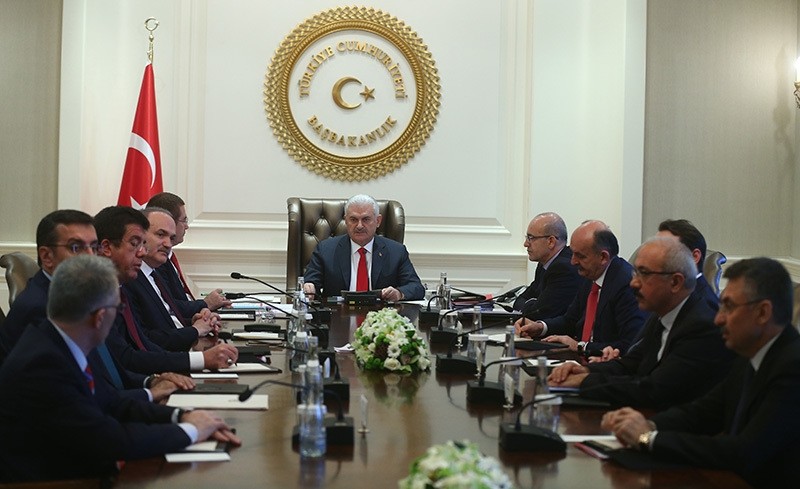 Prime Minister Binali Yıldırım has announced the decisions taken at the Economy Coordination Board (EKK) meeting held last Friday in a press conference with the cabinet held in capital Ankara on Thursday.

Recalling that they made decisions on various issues such as supporting the real sector, increasing employment, resuming and accelerating reforms, and continuing to save money in the public sector, Yıldırım publicly shared some of these decisions that will be immediately put into effect following the completion of their technical studies.

The decisions to support the economy are not expected to create a burden on the government's budget by more than 1 percent.

A loan volume of TL 250 billion ($72 billion) will be established with the Credit Guarantee Fund in order to relieve the cash needs of the companies in the market. While this number is way above the firms with a congestion of about TL 40 billion, small and medium sized enterprises (SMEs) will mainly benefit from this in addition to those who deal with trade. The guarantee will be 100 percent in the export credit, 90 percent in SMEs, and 85 percent in trade. This is the first and most important measure.

Support for investments up by 15 pct

A corporate tax reduction will be fully implemented. All the incentives will be applied to other profits as well. Investment-oriented construction works will be given value-added tax (VAT) refunds, which comes as a new application and a new convenience in construction. Incentives only cover 2017; 2018 will be taken care of when the time comes.

Some measures have been taken in order to protect and increase employment. Premiums for Jan.-Feb.-March 2017 will be shifted to Oct.-Nov.-Dec. 2017 for the private sector employers who benefit from the minimum wage support in parallel with the actual number of premium payments. Additional interest rates will not be added to the payments, but they will be only deferred.

On-the-job programs will be improved

On-the-job training programs and entrepreneurial programs will be further improved. Some 500,000 citizens will be provided with the Turkish Employment Agency's (İŞKUR) active labor force programs in this sense. The private sector will benefit from this implementation.

The "Decree on Provisions" which provides the authorization and enables the restructuring of loans that the Banking Regulation and Supervision Agency (BDDK) allocates to the banking sector has been accepted, the prime minister declared. The decree aims to decrease the costs of SMEs. The scope of the SMEs definition was expanded to TL 125 million.

"We have taken a serious of measures to expand the volume of exports; we are increasing the equity of Eximbank, namely the Turkish Bank of Export Loans. In foreign currency loans allocated for contractors operating abroad, we are going to impose a 0 percent interest rate on the goods these contractors will bring into the country. The difference of the interest rates will be compensated by Eximbank," he said.

Loans for SMEs, no payment for 1 year

Another incentive that the decisions of the Economic Coordination Council introduced for SMEs is a loan program that does not ask for payment for the first 12 months.

"The Ministry of Science, Technology, and Industry has a support package for SMEs. As part of that package, SMEs will be given a loan of TL 50,000 with a term of three years with no payment in the first year," the prime minister said.

The loan will be provided for SMEs based on their current balance sheets.

At the press conference, Prime Minister Yıldırım also said there will be no additional effect or burden that can be born out of these incentives aiming to support real economy.

"We will use budget savings for all these measures that we have taken in order to introduce real economy. We will continue to implement fiscal discipline. The detailed calculations have been executed. We have scheduled structural reforms to be actualized in 2017," he noted.

Prime Minister Yıldırım announced another regulatory measure against competition between public banks to collect public money, which increases the cost of giving loans.

"From now on, public banks will not compete with each other as they collect money from the public. The public's money is deposited in public banks. Public banks compete with each other and with other private banks and we previously told them that it is not necessary. As the cost of collecting public money increases, the cost of allocating that money to real economy increases. We introduced a limit, which is 7.58 percent [interest rate that could be imposed on loans given by public banks]," he said.

This regulation enables public banks to allocate the money to investors and exporters with lower interest rates.

As an extension of President Erdoğan's call to exchange foreign currency to boost the Turkish lira, a number of public institutions have converted their foreign currency deposits and assets into Turkish lira. The decisions taken by the Economic Coordination Council have introduced regulations that Erdoğan has previously called for. As the prime minister announced, the state will conclude contracts in Turkish lira.

"The state will not land any contracts in dollars unless it has to. We will convert contracts that have been signed before in foreign currency into Turkish lira as much as we can, which we will continue in the period to come," Yıldırım announced, noting that it could save up to $10 billion.

Fiscal discipline in the public sector

Yıldırım noted there the public sector will execute tight fiscal discipline in 2017, cutting unnecessary expenses such as buying a new building or cars or traveling abroad.

"We have to turn to ourselves and see what we can do before asking something from the people. We will introduce serious expense limitations for the public in 2017. There will be no money to spend on the things which are not prioritized," the prime minister said.

'There will be no tax increase'