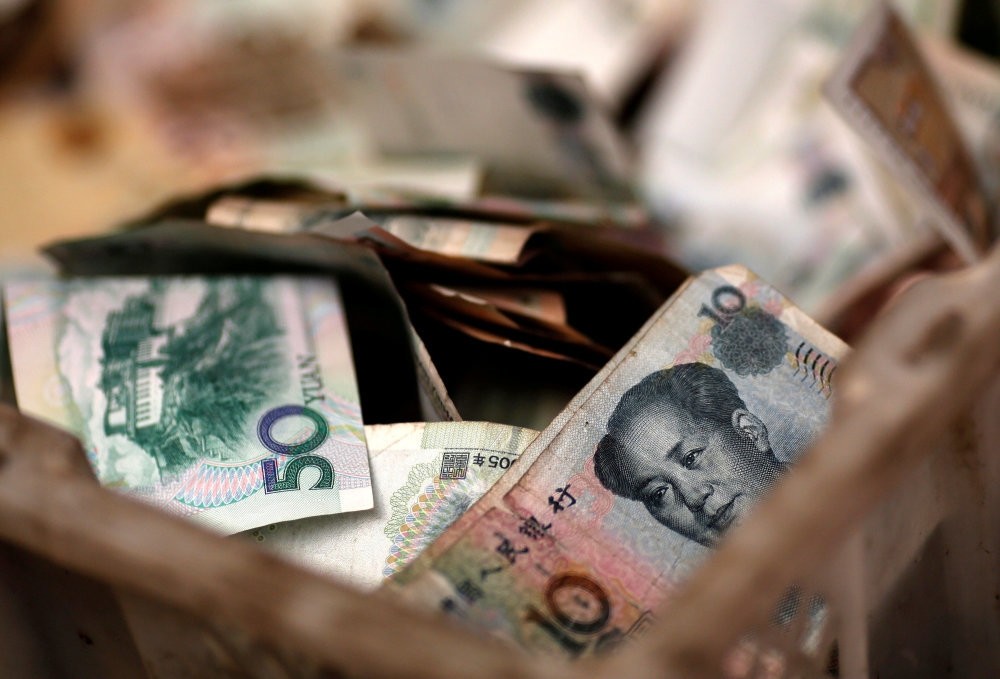 Chinese yuan banknotes are seen at a vendor's cash box at a market in Beijing. Turkey and China has realized the first currency swap transaction.
by Daily Sabah with AA Dec 09, 2016 12:00 am

The first currency exchange transaction between the Turkish and Chinese central banks was realized as a move to support using national currencies in foreign trade. World economies are seeking for ways to rescue their currencies from the mounting exchange rate pressure

President Recep Tayyip Erdoğan's proposal to use the national currency in foreign trade has gained momentum following the Central Bank of the Republic of Turkey's (TCMB) first currency swap transaction with the People's Bank of China (PBOC). Erdoğan's proposal, which has been on the agenda for a long time, has garnered support from all segments of the society, as the first currency exchange transaction between the central bank and the PBOC took place on Nov. 30, 2016. After some public institutions and organizations announced that contracts, auctions and sales will now be realized in the Turkish lira instead of the dollar.

Following Erdoğan's calls, members of the private sector have followed suit with Turkcell, one of the biggest telecommunication companies in Turkey, reportedly preparing to make future payments to its Chinese suppliers in Yuan. In a recent statement, Erdoğan pointed out the importance of using national currency in foreign trade, saying that he has offered Russia, China and Iran to complete business transactions in their local currencies and the lira, an offer the trio have apparently found reasonable.

Speaking at a press conference on the "Monetary and Exchange Rate Policy in 2017," which was held a couple of days ago, Turkish Central Bank Governor Murat Çetinkaya said the bank places importance on the issue of trade using national currencies.

He claimed the use of the lira in international transactions has increased. Underlining how conducting trade in national currencies was important for the effectiveness of risk management, reducing the cost of foreign trade transactions and sensitivity toward reserve currencies, Çetinkaya said, the central bank has begun actualizing currency swap transactions with China.

According to the central bank and other banking sector sources, the first currency exchange transaction between China and Turkey took place on Nov. 30, 2016. The current currency exchange agreement, which came into force in 2012, was extended for three more years in 2015, when the amount of the agreement was increased to 12 billion yuan.

As part of the currency swap agreement, which was signed to increase the trade volume between Turkey and China, the Industrial and Commercial Bank of China (ICBC) Turkey, used a fund of TL 450 million.

ICBC Turkey, the first Chinese bank to take over the majority stake of a local bank and operating in Turkey since May 22, 2015, has been the first institution to have actualized the agreement that signed to boost trade between the two countries. ICBC Turkey will allocate this fund for use in the Turkish economy as loans and investments.

According to figures, Turkey had a foreign trade volume of $28 billion last year with the People's Republic of China, one of its biggest trading partners. The currency exchange agreement aims to ensure current account balance between the two countries and the use of national currencies in trade and investments. This is a major step that has been taken to finance the trade between the two countries using national currencies.

Also, a total of 56.1 percent of imports were carried out in dollars, 35.5 percent in euros, 7.1 percent in Turkish lira and the rest was carried out in other currencies. Industrial and Commercial Bank of China Limited (ICBC) Turkey Board Member Hilmi Güler commented on the matter, saying, "We will reach places where the sun rises through common culture, universities, banks and technology companies."

Güler continued to say that Chinese authorities are very positive toward the use of national currency and they are working in a result-oriented manner like Turkey. Stressing that President Recep Tayyip Erdoğan was very right in his call; Güler said that this was not an instant discourse, but a discourse having a background and preparations. According to Güler, Erdoğan's proposal, like his argument "The world is bigger than five," has great repercussions not only in Turkey, but also throughout the world.

Pointing to the fact that China has great trust in Turkey, Güler said it has "loosened its purse's strings" to invest in Turkey. In addition to entering the Turkish market with the ICBC, China has also begun providing loans to Turkey's key national institutions.

Emphasizing that the Central Bank of the Republic of Turkey's currency swap with China was important, Güler noted that these positive developments will continue in the fields of Islamic banking, commodity, and interest sand stock swaps. He said the question is to bring the current account deficit to a reasonable level and to increase the trade volume to a healthy level.

"So, it is crucial to reduce risks arising from currency diversification. As trade is actually an exchange, we should avoid putting too many variables together," he stated. Güler argued that until recently Turkey has attached importance to "where the sun sets" and ignored "where the sun rises." He added that there were many things to do with China, and technology, medicine and telecommunication are the three basic fields. Referring to the Turkish-Japanese University which is being established upon Erdoğan's order, Güler noted, "We will reach places where the sun rises through common culture, universities, banks and technology companies."

Turkcell Deputy Chief Financial Officer Bülent Aksu said one of the most important lifelines of Turkey on its way to achieving its 2023 vision goals is to found a national economic system that is resistant to financial attacks. In this regard, he continued to say that it was quite significant to encourage the use of national currency in foreign trade. "We believe our state's decisions are a guiding spirit for the private sector," he said.

According to Aksu, Turkcell wants to guide the private sector by doing its share and taking the necessary actions in line with national interests. With this purpose, Turkcell has started to convert its foreign currency-denominated investment expenditures, product and service purchases and lease agreements into Turkish lira. Also, the company has accelerated its initiatives to use Turkish lira or local currencies in the procurement of equipment with its foreign suppliers. As a result of all these measures, Turkcell is ending foreign currency purchases from the market and is waiting for the enactment of the draft law on the conversion of the last installment of the 4.5G license into Turkish lira.

Aksu said if such initiatives are accepted and implemented by the private sector in general, the dollarization, which is one of the biggest structural problems of the Turkish economy, will significantly be overcome. "I believe that the fragility of the Turkish lira will permanently end as a result of the decrease in foreign currency demand," he added.