US to have wealthiest Cabinet

Donald Trump's billionaire cabinet, formed with tycoons like the president-elect himself, is the wealthiest administrationt the world has ever know with a combined value over $15 billion, excluding Trump

Donald Trump, who was elected the 45th president of the United States, has formed the world's richest cabinet, with businessmen whose wealth totals over $15 billion. 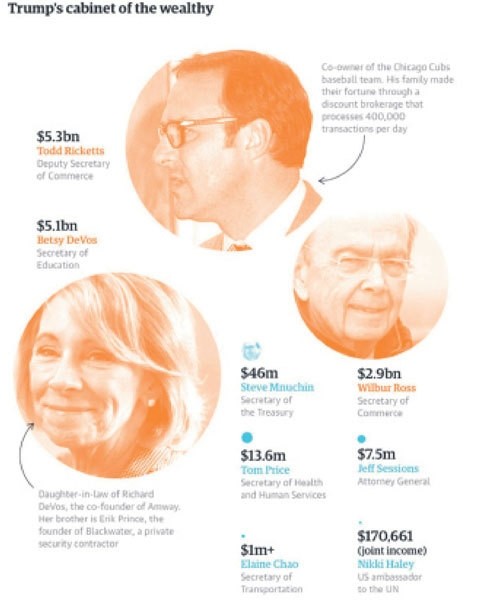 The cabinet of Trump, who will take over the office in about a month, has narrowed down to a few unfilled posts. Picking his colleagues from soldiers an businesspeople, Trump will rule the country with the wealthiest cabinet in not only the entire history of the U.S., but also the world. The total wealth of the possible cabinet members expected to take part in the Trump administration totals about $15.2 billion. The figure approaches $20 billion when Trump's additional $4.5 billion fortune is counted.

According to the U.S.-based economy magazine Forbes, Todd Ricketts, the wealthiest person on Donald Trump's cabinet, was chosen as deputy commerce secretary. The total assets of the Ricketts family, one of the owners of the Chicago Cubs baseball team, is estimated at around $5.3 billion.

The second richest name on the cabinet is Betsy DeVos, nominated for the Education Secretary. Despite not having supported Trump at the Congress of the Republican Party, DeVos, who accepted the proposed position, shares a total wealth of $5.1 billion with her husband.

Wilbur Ross, nominated for the Commerce Department, is the third richest member of Trump's cabinet. It has been noted that the net property of Ross, who founded his own company after working for the world-famous Rothschild Group for about 25 years, is about $2.9 billion.

Linda McMahon, selected as the head of Trump's Small Business Administration, is the fourth and last billionaire in the list. The net fortune of McMahon, the co-founder of the professional wrestling franchise the WWE, totals about $1.16 billion when including the total assets of her husband Vincent McMahon.

ExxonMobil CEO Rex Tillerson, who has been nominated by Trump for the State Department, is the fifth richest person in the cabinet with nearly $300 million in assets. Tillerson, who has been working in the energy sector for nearly 40 years, has been the target of criticism due to his close ties to Russian President Vladimir Putin. Goldman Sachs Chief Operating Officer (COO) and President Gary Cohn, who has been appointed to the Directorate of National Economy Council, has a total wealth of over $266 million.

Former Goldman Sachs partner Steve Mnuchin, nominated for the U.S. Treasury Department, has total assets of $46 million. The fact that the OneWest Bank, owned by Mnuchin between 2009 and 2015, has committed irregularities in housing loans is stated to be causing speculations in the Senate, especially among Democrats. Nominated for Secretary of Transport, Elaine Chao, the daughter of a shipping magnate, made more than $1 million from serving on the boards of News Corp, Wells Fargo, Ingersoll Rand and Vulcan Materials in 2015, public records show. Chao was in former President George Bush's cabinet and is married to the Senate majority leader, Mitch McConnell, whose net worth in 2014 was $22 million.

An orthopedic surgeon staunchly opposed to Obamacare, Tom Price, is nominated for health secretary. It is estimated that he had a net worth of $13.6 million in 2014.