The myth of globalization may shatter after hard blows in 2016 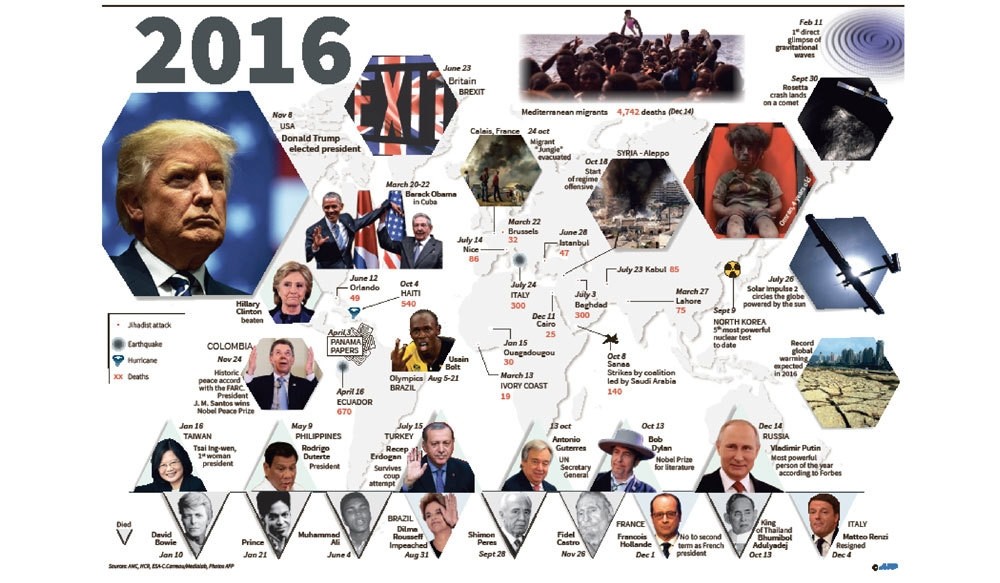 2016 has borne witness to unexpected events including the U.S. elections and Brexit, which dealt hefty blows to globalization amid pledges to break major global trade deals that may change the course of history, shaping the future in a drastically different manner than projected

The myth of globalization has taken sway over the world for centuries; in an increasing trend since the 14th century, the global markets have become more and more intertwined, peaking particularly after the Industrial Revolution and the beginning of the 20th century. After the 1980s, financial markets got more integrated with bunches of money flowing across global markets.

Following the 2008 meltdown, the trend has been exposed a little diversion, or rather a retreat. The Bank for International Statements (BIS) conducted a survey on the foreign-exchange markets. Daily turnover in April hit $5.1 trillion, down from $5.4 trillion in April 2013, which is still a gross number compared with the turn of the century, when daily turnover was around the $1 trillion mark. But this relatively small decrease demonstrates that markets are getting a little less frenetic; spot currency trading has fallen by 19 percent in three years.

Cross-border banking claims peaked in the first quarter of 2008 at $34.6 trillion, ahead of the meltdown. By the second quarter of 2010, they had dropped to $27.9 trillion, and they have never recovered their pre-crisis levels. In the second quarter of this year (the most recent data), claims were $28.3 trillion. Part of this may be a consequence of events in the euro zone, where the sovereign-debt crisis caused banks to cut back their lending to weaker economies. Furthermore, cross-border trading gas also seen some threatening moves, with the election of Donald Trump in U.S., who promised to terminate the Trans-Atlantic Trade Partnership (TPP).

Amid such retreats and reductions with regards to the globalization of markets, 2016 has been a tumultuous year and has drawn a rather gloomy picture with respect to globalization.

The election of Donald Trump as U.S. president and Britain's decision to leave the European Union have raised questions over the future of tariff-free trade and companies' freedom to move production to lower-cost countries. Borders are back in vogue. Economic nationalism is paying political dividends.

"We want our country back" was the rallying cry of those backing Brexit, a sound bite that had echoes in Trump's "Make America great again."

The rise of Trump and the triumph of Brexit had their roots in the global financial crisis of 2008. Eight years later, the world economy has still not yet fully gotten past that shock to its confidence - people are nervous, some are angry, and many are seeking novel solutions to their problems. Next year, there's scope for more uncertainty with elections in France and Germany.

Here is a snapshot of the year's top stories that shook the global markets:

In what was a sign of things to come, Britain voted to leave the EU in a referendum in June. The decision came as a surprise - certainly to bookmakers and many pollsters who had consistently given the "remain" side the edge - and means Britain has to redefine itself after 43 years of EU membership. There are many shades of potential Brexit, from an outright divorce that could put up tariffs on goods and services, to a more amicable parting that sees many of the current trading arrangements kept in place. The pound's fall to a 31-year low below $1.20 at one point is testament to that uncertainty.

Pollsters and bookmakers got it wrong again a few months later when Trump defeated Hillary Clinton in the U.S. presidential election. Whether he translates his "America First" platform into action following his inauguration in January will help shape the global economy for the next four years at least. Trump has railed against long-standing trading agreements, including the North American Free Trade Agreement , and vowed to punish China for the way it devalues its currency against the dollar and to tax U.S. firms that move jobs overseas. He has also laid out plans to bring America's creaking infrastructure up to 21st-century standards, a new spending pitch that has the potential to boost jobs - but which could also lay the seeds of higher inflation.

Trump's victory did not cause the bottom to fall out of the stock market rally that's been largely in place since 2009, when the world economy started to first claw out of its deepest recession since World War II. In fact, both the Dow and the S&P 500 rallied to hit a series of record highs. Stocks have also benefited from a raft of big corporate deals this year - executives are seeing takeovers as a fast way to generate growth in what is otherwise a low-growth global economy disrupted by non-stop technological innovations. Notable deals in 2016 included the announcement of an $85 billion merger of Time Warner and AT&T and the $57 billion takeover of Monsanto by Germany medicine and farm-chemical maker Bayer. The $100 billion takeover of SAB Miller by Budweiser maker Anheuser-Busch InBev was also completed.

During his campaign, Trump criticized Federal Reserve Chair Janet Yellen, saying she should be "ashamed" of the way she's run policy since taking the helm in 2014. A year ago, the Fed appeared set to follow up its first interest rate hike in nearly a decade with three or four more in 2016. But there was no move until Dec. 14, when the U.S. central bank raised its main interest rate to a range between 0.5 percent and 0.75 percent. Many factors explained its hesitation to raise rates, including unease over the global impact of China's economic slowdown and uncertainty surrounding the U.S. election. But with the U.S. economy continuing to do better than most developed countries - with unemployment below 5 percent and inflation on the way up - the Fed finally delivered another hike. The markets are predicting another three or four increases next year. Those expectations have helped the dollar rally, especially as other major central banks persevere with super-loose monetary policies to breathe life into their economies.

As the world's second-largest economy, China is playing a bigger role in the functioning of the global economy. Nowhere was that more evident than in the early months of 2016, when jitters over the scale of the slowdown in China caused wild swings in financial markets. Stocks took a pounding while commodities tanked, with oil skidding to 13-year lows, as traders factored in lower demand from resource-hungry China. The slump in commodities weighed heavily on economies like Australia that are big exporters of raw materials. China's economy is ending the year in relatively good health as authorities try to pivot the economy's focus from manufacturing to more consumer spending. But Trump's promises to take a tough stance in trade will be of concern to Beijing.

For the first time since December 2008, at the height of the financial crisis, the Organization of Petroleum Exporting Countries cut its production levels in 2016. November's cut, soon followed by more cuts by non-OPEC countries like Russia, helped push oil prices sharply higher. At over $50 a barrel, benchmark New York crude is markedly higher than the near 13-year lows around $30 recorded at the start of 2016, when investors focused on high supply and concerns over an economic slowdown. The oil slump helped put several crude-producing countries into severe recessions, including Brazil and Venezuela, and even saw wealthy Saudi Arabia cut back on spending. The question for 2017 is whether OPEC -and non-OPEC - countries can deliver on their production promises. If they do and higher oil prices stick, that will push up inflation in the global economy.

The Paris-based Organisation for Economic Co-operation and Development (OECD) said global trade growth was already "exceptionally weak" and jobs would suffer if politicians rolled back the clock on trade liberalization.

The organized used its quarterly forecasts to urge governments to use low borrowing costs to invest and enact structural reforms. The group issued a warning to politicians not to over-rely on central banks to drive the recovery with monetary policies, such as low interest rates and electronic money-printing programs, right after U.S. presidential elections.

It forecast that, after averaging 3.9 percent growth over the decade to 2013, global growth would be 2.9 percent this year then edge up to 3.3 percent in 2017 and 3.6 percent in 2018. The OECD said global trade growth had collapsed and the prospects of only a modest recovery over coming years suggested globalization "may now be close to stalling." The report adds, "The countries that impose the restrictions damage themselves more." "This economic outlook suggests that protectionism and inevitable trade retaliation would offset much of the effects of the fiscal initiatives on domestic and global growth, raise prices, harm living standards, and leave countries in a worsened fiscal position. "Trade protectionism shelters some jobs, but worsens prospects and lowers wellbeing for many others," the report said.
Last Update: Dec 20, 2016 2:22 am
RELATED TOPICS