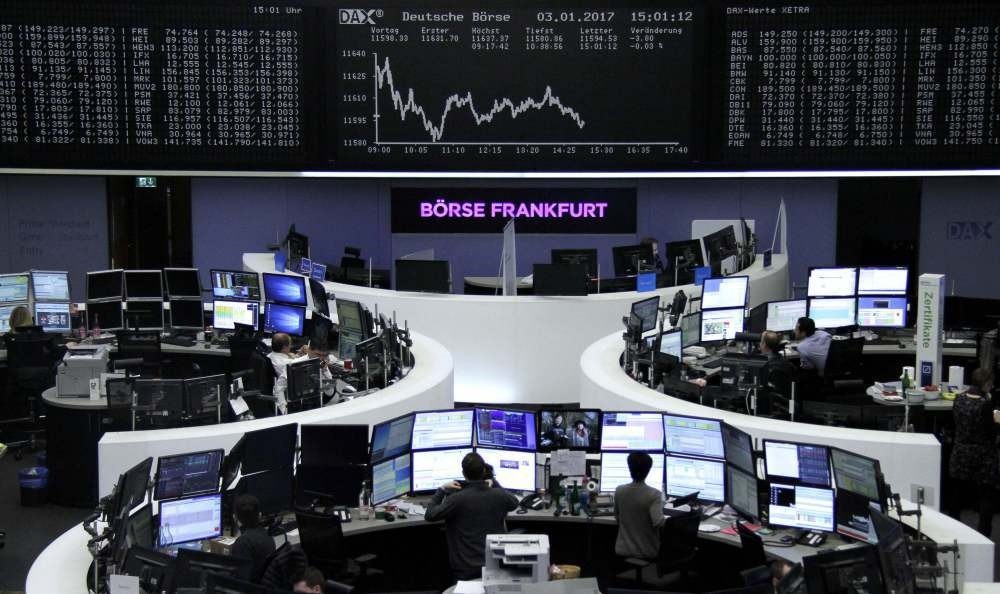 Boosted by the manufacturing sector, stock markets around the world which closed 2016 in the black give a lucrative and confident start to 2017, and dollar continues its spike against other currencies

Global markets marched confidently into 2017 Tuesday, with Asian stocks extending gains after European shares surged to their highest in a year and the dollar resuming its climb after last week's stumble.

Oil, gold and base metal prices also advanced, as signs of solid factory growth in China and Europe gave the global manufacturing sector a solid boost heading into the new year.European markets were also poised for a positive start yesterday, with financial spreadbetter IG Markets predicting Britain's FTSE 100 would open 0.2 percent higher, and Germany's DAX and France's CAC 40 would start the day up 0.3 percent.

MSCI's broadest index of Asia-Pacific shares outside Japan rose 0.6 percent as most regional markets reopened after the New Year holiday. It ended 2016 with a 3.7 percent gain, its best year in four. Japan was closed for an extended New Year holiday. Australian shares were the best performers in the region, closing up 1.2 percent. Hong Kong's Hang Seng rose 0.7 percent.

In China, both the CSI 300 index and the Shanghai Composite climbed 1 percent. China was Asia's worst performing major stock market in 2016 with a 11.3 percent loss in its worst year in five.

A private business survey showed China's factory activity picked up more than expected in December as demand accelerated, with output reaching a near six-year high. "A year ago, the Chinese markets kept everyone on their toes," said Jingyi Pan, market strategist at IG in Singapore, referring to market turmoil in China that engulfed global investors last January.

"I don't think that we will see a repeat given that the global economy has a better foothold compared to a year ago," Pan said. "Nevertheless, the market is always adjusting and will likely recognise that the full year growth results and clarity into (U.S.) President-elect Donald Trump's policies will influence market direction in the near term," he added.

The positive Chinese news lifted the Australian dollar, which added 0.6 percent to $0.7230.

The dollar index, which tracks the greenback against a basket of six global peers, rose 0.4 percent to 102.63, its biggest one-day advance since Dec. 15, as the prospect of higher U.S. interest rates kept sentiment bullish. The dollar pulled back 0.1 percent to 117.33 yen yesterday, after jumping almost 0.6 percent on Monday, its biggest one-day gain in more than two weeks.

"Following a period of consolidation between now and late January, we believe the USD will put on another 10 percent of gains over the next eighteen months," said Richard Grace, chief currency strategist at Commonwealth Bank of Australia.

U.S. S&P futures rose 0.5 percent during the Asian day. Wall Street was closed for the New Year holiday on Monday.

With Britain and Switzerland also shut on Monday, Europe's STOXX 600 index added 0.5 percent to hit its highest level since Jan. 4, 2015.

That came on the heels of data showing manufacturers ramped up activity at the fastest pace in more than five years in December.

The positive numbers failed to shake the euro out of its doldrums, with the common currency slumping 0.6 percent on Monday. It edged up 0.3 percent to $1.0486 on Tuesday.

Investors are keeping an eye on the Chinese yuan after the central bank nearly doubled the number of foreign currencies in a basket used to set the renminbi's value. Starting on Jan. 1, the number of currencies in the CFETS basket increased to 24 from 13, with new entrants including the Korean won, the South African rand and the Mexican peso. In its first fix since the change, the Chinese central bank set the official yuan midpoint at 6.9498 per dollar yesteday, compared with the previous close of 6.9467. It weakened further to 6.9548 at 0640 GMT.

The renminbi posted its biggest annual loss since 1994 in 2016, with the dollar up almost 7 percent versus the Chinese currency.

China's foreign exchange regulator said on Saturday that, from Jan. 1, it would step up scrutiny on individual foreign currency purchases and strengthen punishment for illegal money outflows, although the $50,000 annual individual quota will remain unchanged.

In commodities, oil prices rose after a historic deal between OPEC and non-OPEC producers to reduce production took effect on Jan. 1. Oil was the world's best-performing asset class in 2016, with a gain of around 50 percent.

Gold also rose after initial losses, with the precious metal adding about 0.5 percent to $1,157.40.