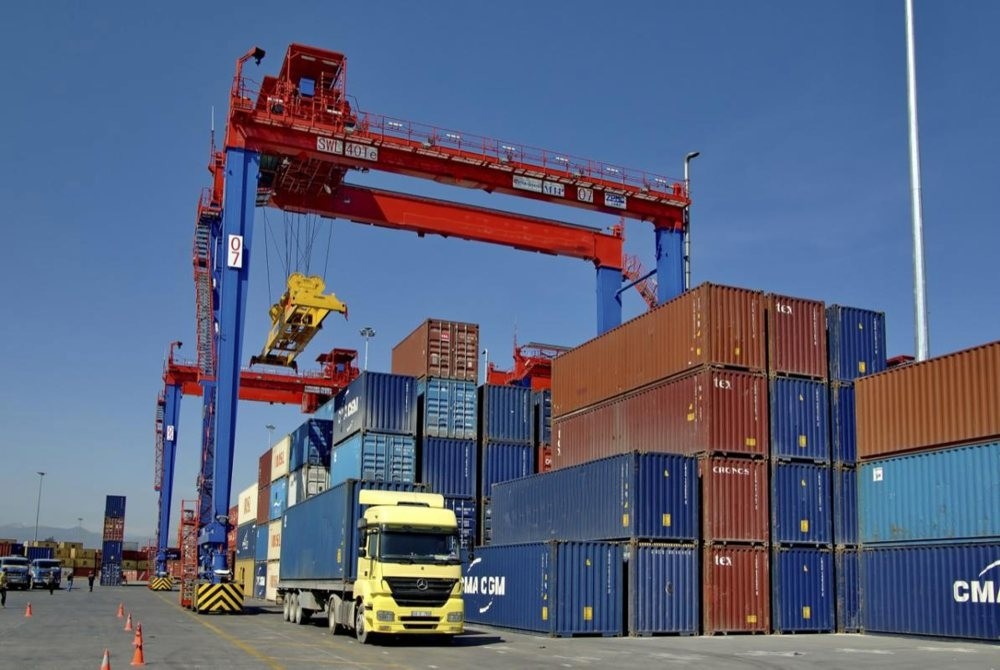 Despite the 4 percent decrease in the volume of global trade in 2016, Turkey secured an increase in its share of the world trade by hitting a record and the country targets $155 billion in exports for 2017

The Turkish Exporters Assembly (TİM) announced on Tuesday the export figures for December and the 2016 financial year, along with its 2017 goals in a meeting held in the Turkish capital of Ankara.

According to data announced in the meeting, while the share of exports in world trade stood at 0.87 percent in 2015, it broke a record by hitting 0.89 percent in 2016.

Indicating that 2017 will be a more balanced year than last year, Economy Minister Zeybekci said that developments are expected to get better in Turkey's region.

Zeybekci noted that a poor growth performance in the global economy negatively affected global exports, adding that total exports, which declined by 13.5 percent in value in 2015, decreased by 4 percent in dollars in the first 10 months of 2016, according to data compiled by the World Trade Organization (WTO). Yet, despite the shrinking global trade, Turkey's share in world trade reached 0.89 percent in 2016, up from 0.87 percent in 2015.

According to the country-based exports data released by the TİM, Turkey made the largest amount of exports to Germany in December with approximately $1.12 billion, seeing an increase of 3.7 percent compared to December 2015. While Britain ranked the second with $737 million, exports to Iraq amounted to over $732 million with a 59 percent increase in December, followed by Italy with 12 percent and the U.S. with 8.7 percent. Exports to the United Arab Emirates (UAE) and Bulgaria rose by 77 percent and 44 percent, respectively, in the same period.

According to exports in country groups, while the EU led the way with $5.6 billion and a 45.5 percent share, Middle Eastern countries ranked second with $2.6 billion, recording a 21.1 percent share, followed by Africa with 8.5 percent and the Commonwealth of Independent States with a 6.6 percent share.

During his speech at the meeting, TİM Chairman Büyükekşi stated that total exports reached $12.3 billion, increasing by 7.4 percent compared to the same month of the previous year. "Yesterday, the Customs and Trade Ministry announced a 9.3 percent increase. Our exports are $12.817 billion. Our kilogram-based exports increased by 14.7 percent," Büyükekşi stated.

Quantity-based exports increased by 3 pct in 2016

Evaluating the foreign trade in 2016 in light of the macroeconomic data, Zeybekci said that Turkey's total foreign trade volume reached $341 billion as of 2016.

Recalling that exports closed the previous year in balance when compared to 2015, with only a small decrease of 0.8 percent, Zeybekci said imports fell by 4.2 percent to below $200 billion. He added that as of 2016, the total foreign trade volume was recorded at $341.2 billion. "Our foreign trade deficit was down by 11.7 percent while the coverage ratio of imports by exports rose to 71.8 percent. Quantity-based exports increased by 3 percent in 2016 when compared to 2015," Zeybekci said.

Zeybekci noted that exports increased in 11 of 26 sectors, and that the EU had a share of the 48.1 percent in exports. Highlighting that they were pleased by an increase of 7 percent with the EU, and that 2017 will follow in the same direction, Zeybekci said that exports to the Middle East countries followed the EU with a 21.8 percent share. He also added that Turkey experienced a decrease of around 31 percent in other European countries, reaching around $10 billion in exports.

Zeybekci underlined that last year Turkey exported to 250 countries and customs territories, listing Iran as the leading country which recorded the most serious increase among the 126 countries in exports, with an increase of 36 percent ($1.3 billion).

Pointing out that 2016 was a tough year in terms of global trade, TİM Chairman Büyükekşi said that according to the WTO, the quantity-based growth in 2016 global trade will be the lowest in the last 15 years, and that the global trade in 10 months of 2016 shrank by 4 percent in dollars.

Suggesting that the world trade volume is expected to reach $16 trillion at the end of the year, Büyükekşi noted, considering the fact that the said figure was $16.3 trillion in 2008, the shrinkage is actually expected to be below 2008 figures.

On a sector basis, Turkey's automobile sector led the way, recording the largest amount of exports in December 2016 with $2.3 billion, followed by the apparel sector with $1.3 billion, and the chemicals sector with $1.2 billion, Büyükekşi noted.

Zeybekci announced in the meeting that they will open the first Turkish trade center in Tehran, informing that the support will be provided for five years within the scope of the "Turquality" program, and therefore the problems caused by seasonal support will be solved.

Underlining that the cash support provided in exports tripled, Zeybekci pledged that the government is ready to quintuple this figure. Furthermore, he stressed that this export mobilization will definitely be realized and succeeded in 2017.

"Our export figure of about $150 billion is perceived as 'the limit that we could arrive with our existing capabilities.' There is such a problem in Turkey and in our exporters. We need to overcome this and use all the necessary instruments in the meantime," Zeybekci said. Stressing that Eximbank took on responsibility while providing loans, the minister said the bank is aimed to provide financing of about $100 billion, pointing out that a new action plan on e-trade will be put into effect. "We prepared this action plan and submitted it to the High Planning Council, Zeybekci said, noting that this plan will be put into effect and support will be launched soon.

TİM Chairman Büyükekşi underscored that they, as exporters, aim to disclose the potential of the country's geography, declaring 2017 as a "leap year." Explaining that with the end of decline in the prices of oil and goods in 2017, the export figures will increase once again, and the export losses experienced as a result of the political crisis with Russia will decrease and disappear. Büyükekşi said that due to the hike in oil prices of the surrounding petrol exporting countries, their economies are foreseen to recover in 2017. "Our exports with these countries will hopefully increase. In addition to all the reform and support packages announced by our government, increasing the support limit provided for exports from $1 billion to $3 billion, granting green passports to the exporters, and financial incentives given to exports will accelerate our export figures in 2017," Büyükekşi said. Büyükekşi also added that the aim is to supersede the objective of the medium-term plan of $153.3 billion, suggesting that the country's exports are forecast to rise to $155 billion by the end of the year.
RELATED TOPICS