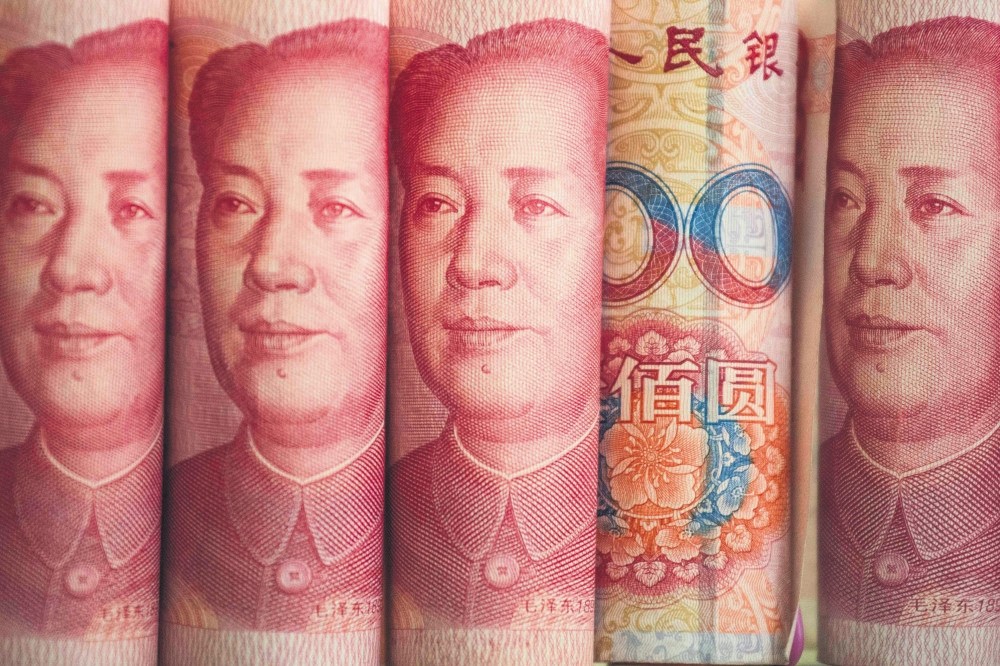 AFP Photo.
by reuters Jan 07, 2017 12:00 am
China's yuan held onto its gains after a two-day rally on Friday as borrowing rates for its offshore component soared and the central bank set a stronger guidance rate for the currency, signaling no respite in official efforts to contain speculation.

Both the onshore and the offshore yuan have been rallying this week, driven predominantly by a blow-up in yuan borrowing costs offshore and tighter liquidity. Chinese authorities are keen to deter speculation in the currency and analysts and traders suspect policymakers have sought to prevent it from weakening to the 7-per-dollar level ahead of U.S. President-elect Donald Trump's inauguration on Jan. 20.

The People's Bank of China (PBOC) set the official midpoint for the yuan, which is allowed to move in a tight band around that guidance rate, at 6.8668 per dollar prior to the market opening, 639 pips or 0.9 percent, firmer than the previous fixing. That made it the largest upward move since the yuan was revalued and taken off a fixed dollar peg in July 2005.

By 0415 GMT, the currency was trading at 6.9103 to the dollar, down 0.4 percent from late Thursday but about 1 percent up from Tuesday's close, the first trading day of the year. The currency was on track to log its best week since July 2016. While Chinese authorities may have some success in the short-run in arresting the yuan's descent, pressure will remain on the yuan to depreciate over time, traders and analysts said. "I don't think the volatility in the yuan so far this week will reverse the trend of depreciation. But the yuan is at least unlikely to have another rapid fall ahead of the Lunar New Year," said a Shanghai-based trader at a foreign bank.

Interbank rates for the offshore yuan have been surging this week, suggesting China is keen to squeeze speculators by making it prohibitively expensive to short-sell the yuan. Yuan liquidity conditions in Hong Kong, the main offshore yuan hub, have been tightening.

Overnight yuan interbank rates in Hong Kong were fixed at 61.333 percent on Friday, up sharply from 38.335 percent on Thursday, while yuan deposit rates implied by the offshore forward market ballooned to 112 percent before

easing. Some of the pressure on yuan funding has also been on account of a drying up of yuan deposits in Hong Kong as investors steadily lost faith in a currency which fell 6.6 percent in 2016, its biggest annual fall since 1994. China's currency reserves data due this week is also expected to show reserves are close to falling below the critical $3 trillion figure, which would partly explain the authorities' desire to stem capital outflows and bets that the currency will keep depreciating.

The offshore yuan, or CNH, has risen about 2.5 percent since Tuesday, with its gains over Wednesday and Thursday being the biggest two-day gains since its introduction in 2010. Its rally rippled across major currency markets, causing the

U.S. dollar to give up some of its recent gains against the euro and yen. Still, few seem to be altering their expectations for a weaker yuan in the coming months.

"We believe the surge in the CNH is not sustainable," Gao Qi, FX strategist at Scotiabank in Singapore, wrote in a note on Friday. Gao expects the yuan to depreciate about 5 percent against the dollar this year amid market worries over potential political and trade conflicts between the United States and China after Trump takes office. China's central bank will not tolerate sustained depreciation of the yuan, the China Securities Journal said on Friday. The Chinese currency was not obviously over-valued, and the appreciation of the U.S. dollar has its upper limit, it said in a commentary.
RELATED TOPICS