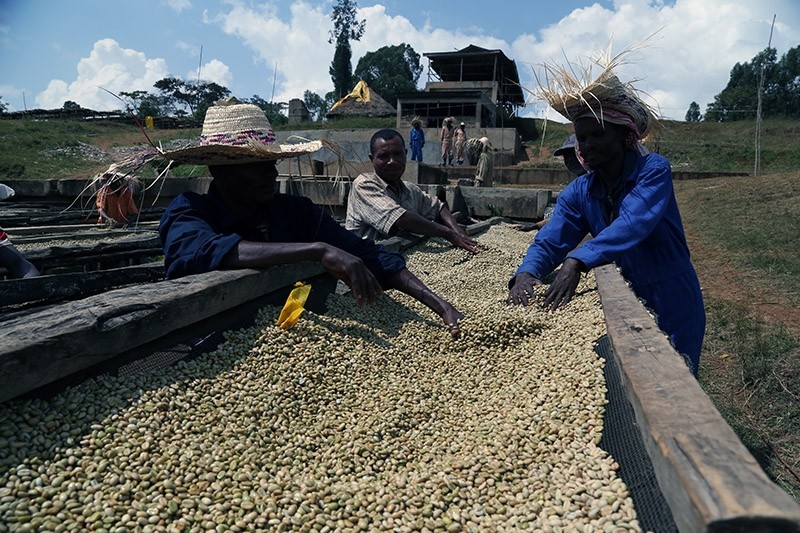 When you enjoy a warm cup of coffee from a cafe run by an international chain like Starbucks, you may hardly realize that the unique flavor may be coming out of Ethiopia.

You are also unlikely to hear the refrain of millions of coffee farmers in the eastern Africa nation, the majority of who do not reap the benefits of their hard-earned produce.

For every kilogram of coffee beans an Ethiopian farmer sells for $3, it is estimated that people up in the supply chain make around $200.

There are an estimated 15 million farmers who produce 270,000 tons (297,600 tons) of coffee in Ethiopia, the fifth-largest producer in the world after Brazil, Vietnam, Columbia and Indonesia.

Around 95 percent of the coffee is produced by small farmers like 68-year-old Selkamo Kemissa, who work in their own farms and sell their produce to middlemen. These intermediaries are widely suspected of short changing them on the huge profit margins.

Kemissa told Anadolu Agency the Arabica coffee produced on his farm near the small town of Shebedino Woreda - located around 315 kilometers (196 miles) southeast of capital Addis Ababa - ends up in multinational chains like Starbucks, where a single cup of coffee could cost as much as what he gets for a kilogram or even more.

"I have been toiling away at this coffee farm for over 30 years," he said. "It is a mother tree of our life and the only source of our income for generations."

Selkamo hopes to produce at least 6,000 kg (6.6 tons) of marketable beans from his yearly harvest. He employs around 20 farmhands four times a year and pays them a dollar and a meal per day.

After payment of daily wages and other expenses, he hopes to fetch around $23,500, or about $4 per kilogram, for his produce. However, while his hopes are high, he knows well that he deserves more for his hard work.

"For generations, the middlemen and traders have been getting richer and richer, while we have been pushed to an abyss of poverty and helplessness," he said.

"Over the last 12 months, Ethiopia exported 206,654 tons and earned $879.6 million," Shimeles Arega, a spokesman for the Trade Ministry said. "We anticipate that exports will be doubled over the coming years."

Apart from Arabica - a type of coffee said to be indigenous to Ethiopia - the country exports two more globally-recognized quality regional types --Yirgachefe and Harar. Half of the total coffee produced in the country is consumed locally.

The Ethiopia Commodity Exchange (ECX), a central market institution established in 2008 to improve and modernize the trading of agricultural commodities, sets market prices for coffee varieties in the country. It claims the price is based on the New York market.

Selkamo's estimate for his produce is also based on ECX rate. However, small-scale farmers like him have to sell their cherry beans to the chain that provides drying, washing and export services.

"The predominant channel, which accommodates 85 percent of the trade, is composed of small-scale and garden farmers, middlemen, primary market traders, owners of washing facilities and exporters," he said.

"This value chain has been a market place where the well-informed middlemen, traders and exporters make high profit margins at the expense of farmers who are not aware of the market price."

The likes of Selkamo, according to Eshetu, used to lose 60 percent of the market value of their produce in the traditional market structure.

"However, despite a significant transformation, the old value channel has not died away and Selkamo could be hoodwinked by the tradition and expertise of the middlemen to trade in the system," he said.

Belay Balcha, a middleman and a trader, told Anadolu Agency it was "only natural" that profit was being made at every stop of the chain.

"We collect coffee from remote areas and persuade big traders to buy," he said. "[We] also assist farmers financially throughout the long post-harvest period and the relationship is more of a family.

"Instead of branding us as egoistic profiteers, the new market structure shall encourage us to provide competitive opportunities for the market."

Meanwhile, cooperatives are being empowered to provide drying and washing facilities as well as export services, which has increased profit-sharing with farmers, he added.

According to Eshetu, the global market chain has two exploitative attributes. "We are obliged to sell according to the rule of the trade, Freight on Board Djibouti (FOB_Djibouti), which has legalized buyers not to consider our transport and package costs," he said.

"The other injustice is the market price and the current average price for 1 kilogram [2.2 pounds] of Ethiopian specialty coffees is $3. But after value addition they sell it for $200."

According to Teshome Shimeles, a brand expert at the Ethiopian Intellectual Property Office, existing global value chains and their coffee shops generate significant profit from every cup of coffee. "Starbucks, for instance, charges consumers on average $6 to $10 for a cup of coffee," he said.

After lengthy negotiations, 34 countries and hundreds of retailers, including Starbucks, signed royalty-free agreements in 2007 to recognize and protect the brand rights of Ethiopian specialty coffees, according to Shimeles.

In a response to Anadolu Agency's written inquiries, a spokeswoman for Starbucks, who identified herself only as Clare, said the company remained committed to the agreements.

The 2007 deals aim to "ensure a long-term supply of high quality coffee for our customers and positively impact the lives and livelihoods of coffee farmers and their communities".

The Starbucks spokeswoman added: "Since the signing [of the agreement], Starbucks has continued its support of the Ethiopian coffee industry's efforts to increase Ethiopia's share in the global specialty coffee market."

Starbucks also said it has a support center providing agronomy service to the sector.

However, some experts said the support was limited. "They are providing limited technical and professional assistance," Shimeles said. "They have promised to build schools, roads and clinics for farmers but they are not up to their commitments.

"We cannot deny that after the agreement the company has increased a very small amount of the price but it is still lamentably below the real value of our crop."

Eshetu said that companies such as Starbucks "want us to provide them with unprocessed high quality coffees to the end of the world, so that the exploitative chain remains intact."

He welcomed the start of private Ethiopian companies exporting value-added coffee to the world market for the first time.

"But there is still a long way to go before we realize our rights of winning a deserved price for our beans in the global market," he added.
Last Update: Jan 18, 2017 1:56 pm
RELATED TOPICS