Remaining members of TPP pact to move forward after US withdrawal 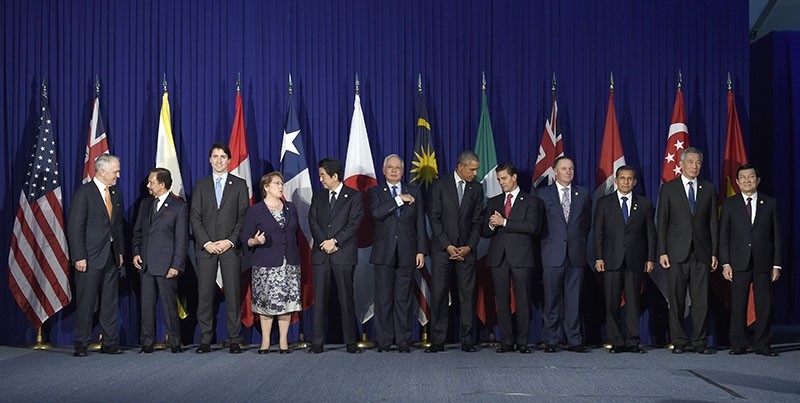 In this Nov. 18, 2015 file photo, U.S. President Barack Obama, center right, and other leaders of the Trans-Pacific Partnership countries pose for a photo in Manila, Philippines. (AP Photo)
by Associated Press Jan 24, 2017 12:00 am

Several countries expressed hope Tuesday that the Trans-Pacific Partnership could be salvaged, after President Donald Trump's decision on a U.S. withdrawal from the trade pact left its future in serious jeopardy.

Australian Prime Minister Malcolm Turnbull acknowledged Trump's move was a massive blow to the 12-nation agreement, but suggested other countries, such as China, may help fill the void left by the U.S.

"Losing the United States from the TPP is a big loss, there is no question about that," Turnbull told reporters. "But we are not about to walk away from our commitment to Australian jobs."

Trump used one of his first actions in office to officially abandon the trade deal on Monday, dubbing it a detriment to American businesses. He favors one-on-one agreements with other nations over multinational pacts.

The move by Trump was expected, and leaders of some of the 11 other nations involved in the initiative earlier said they would move forward with the agreement in some form, with or without the U.S.

Turnbull said he had discussed the future of the deal in recent days with the prime ministers of Japan, Singapore and New Zealand, all TPP members, and believed the pact could survive without the U.S.

Other members of the U.S.-initiated pact are Canada, Mexico, Chile, Peru, Vietnam, Malaysia and Brunei.

"All of us are working to see how we can ensure we maintain this momentum towards open markets and free trade," Turnbull said. "Believe me, protectionism is not a ladder to get you out of the low growth trap. It is a shovel to dig it deeper."

Questioned in Japan's parliament, Prime Minister Shinzo Abe likewise said he hoped to gain Trump's "understanding." Abe has said he hopes to meet with Trump as soon as possible.

Japan completed the TPP ratification process last week, well aware Trump planned to drop out. Abe told lawmakers that such goals were still important for Japan and that TPP would furnish a model for trade deals with other nations, including Europe.

Malaysia's Second Trade Minister Ong Ka Chuan said that the remaining 11 TPP members will hold a meeting to discuss the next course of action on the deal.

"Twelve countries signed the (TPP), but now one wants out. The other 11 can continue by making change to the clauses. There are many possibilities that these 11 countries can still proceed with," the Bernama news agency quoted him as saying. He didn't elaborate.

Turnbull said that in theory China could join the pact following the U.S. departure. But any such change would require a revamp of the deal. In its current form, the TPP can only take effect after it is ratified by six countries that account for 85 percent of the combined gross domestic product of its member nations. The U.S. made up 60 percent of the combined GDP of that group, so TPP could not be implemented as it stands now.

Though he didn't suggest Trump himself would reverse his position, Turnbull did say the U.S. eventually might.

"You have to recognize that his secretary of state, Rex Tillerson, has been a longtime advocate for it," Turnbull said, referring to Trump's nominee. "The Republican Party in the Congress have been strong supporters of the TPP. It is possible that U.S. policy could change over time on this, as it has done on other trade deals."

The U.S. about-face on the deal is a setback for leaders of other TPP countries who invested political capital in fighting to get it ratified.

Australia's opposition leader, Bill Shorten, slammed Turnbull for suggesting the deal could continue without the U.S.

"The TPP's dead," Shorten said. "How on earth can Mr. Turnbull want to waste the time of the parliament, asking the parliament to ratify an agreement which includes America, when America is not in it? It's just the peak of delusional absurdity."

Whatever the deal's fate, the region shows no sign of retreating from the market-opening trend that helped transform its many developing nations into a relatively stable zone of affluent, middle-income economies.

Of broader concern is the uncertainty generated by Trump's threats to impose tariffs of up to 45 percent on some imports. The U.S. is the largest single market for China and Japan, and indirectly a huge source of demand for many of the commodities and goods produced across the region.

"The U.S. was the one encouraging free trade," Ong said. "Suddenly, it is now trying to stop it. There's a possibility this would trigger retaliation by a number of other countries."