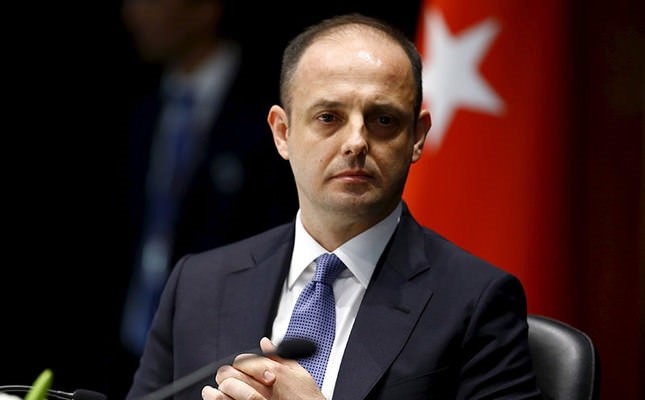 The Central Bank’s decision resulted in no change in the key interest rate while upper band of the interest rate corridor was increased to 9.25 percent. The decision was construed as an important message showing the bank’s determination to control the liquidity and inflation while supporting the growth in Turkey

Following heated discussions and vastly differing opinions regarding what the Central Bank of the Republic of Turkey (CBRT) will decide to do in their Jan. 24 meeting, the long-awaited decision from the bank came Tuesday, recording a 75 basis points increase in the upper band of the interest rate corridor and raising the rates to 9.25 percent, as well as hiking the late liquidity window to 11 percent with a 100 basis point increase.The CBRT on Tuesday hiked its overnight lending rate, the highest of the multiple rates it uses to set policy, by 75 points following the Turkish lira's sharp fall against the U.S. dollar.

The overnight lending rate, the rate banks use to borrow from the Central Bank overnight, rose from 8.50 percent to 9.25 percent, in line with expectations.

However, Turkey's overnight borrowing rate, under which banks lend or deposit money to the Central Bank, remained unchanged at 7.25 percent. The one-week repo rate, known as the policy rate, was also kept at 8 percent, the bank announced.

In late liquidity window interest rates, between 4 p.m. and 5 p.m., the borrowing rate was kept at zero percent and the lending rate was raised from 10 percent to 11 percent.

The bank said in a statement that recent data indicates a partial recovery in economic activity. "Demand from European Union economies continues to contribute positively to exports, while domestic demand displays a weaker course. With the supportive measures and incentives provided recently, the recovery in economic activity is expected to continue at a moderate pace," the statement read. 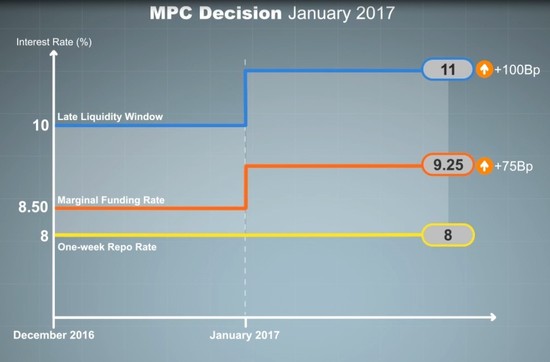 "The committee assesses that the implementation of structural reforms would contribute to the potential growth significantly," it added.

"Yet, excessive fluctuations in exchange rates since the previous meeting have increased the upside risks regarding the inflation outlook," it also said.

The Turkish lira has lost more than 20 percent of its value against the greenback since last November.

"The significant rise in inflation is expected to continue in the short term due to lagged pass-through effects and the volatility in food prices. Accordingly, the committee decided to strengthen monetary tightening in order to contain deterioration in the inflation outlook," the bank added.

The bank vowed that it would continue to use all available instruments in pursuit of its price stability objective. It further added that its future monetary policy decisions would depend on the inflation outlook.

"Inflation expectations, pricing behavior, and other factors affecting inflation will be closely monitored and, if needed, further monetary tightening will be delivered. Moreover, necessary liquidity measures will be taken in case of unhealthy pricing behavior in the foreign exchange market that cannot be justified by economic fundamentals," it said.

The move came after the bank refrained from holding its one-week repo auction for the ninth time in a row during the second day of trading on Tuesday.

The bank has been skipping the auction, where local banks borrow Turkish liras from the Central Bank, in order to stem the sharp decline in the lira's value against other currencies. A repo auction has not been held since Jan. 12 and the bank signaled it would keep skipping the practice until volatility in foreign exchange rates calms down.

Speaking to Daily Sabah, Prof. Dr. Kerem Alkin stated that the Central Bank took a step to both take control over the pricing mechanisms in the real sector and to boost the value of Turkish lira, which has been in a depreciating trend against the U.S. dollar for a while.

With this decision, Alkin noted, the CBRT enjoys the best of both worlds by preventing the negative impacts of pricing behaviors in the real economy that could further ignite inflation as well as by sending a message to the markets by controlling the value of the Turkish lira by way of tightening liquidity for a while.

Tuesday's decision also conveyed an important message to the markets, Alkin pointed out. If the markets will act in a way that supports the CBRT's decision without opting for more speculative actions yielding volatility in the Turkish lira and its devaluation against the greenback, the CBRT will begin an expansionary policy by giving more Turkish liras to the markets.