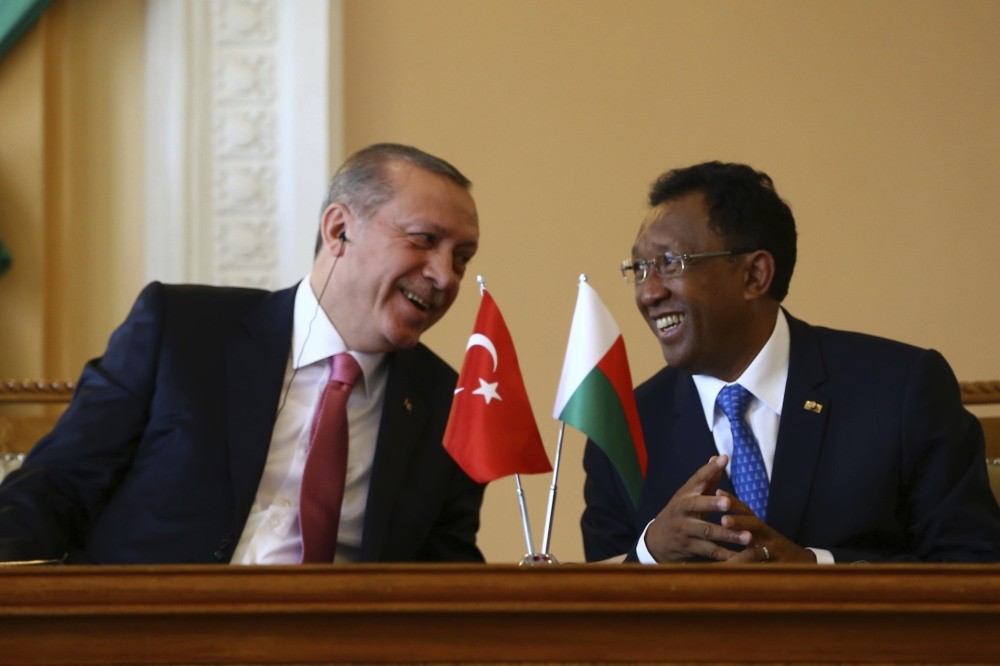 President Erdou011fan (L) with his Madagascan counterpart Rajaonarimampianina
by daily sabah
Jan 26, 2017 12:00 am

Turkish President Recep Tayyip Erdoğan's monumental tour of southeast Africa this week began with a visit to Tanzania on Monday followed by a stop in Mozambique on Tuesday before the president arrived in Madagascar on Wednesday for the third and final leg of his trip where he received a warm welcome on the fourth-largest island in the world with an official ceremony held by Madagascar President Hery Rajaonarimampianina.

Prior to arriving in Madagascar, President Recep Tayyip Erdoğan made history as the first Turkish president to visit Mozambique, accompanied by a large entourage of more than 100 business people who supported him under the auspices of strengthening the bond of friendship, cooperation and bilateral relations with Mozambique, successfully signing six agreements with his counterpart in various fields before continuing on to Madagascar.The final stop in his tour included a joint press conference held before the Business Forum meeting organized by the Foreign Economic Relations Board (DEİK) Turkey-Madagascar Business Council where President Erdoğan said the goal of his visit to the country was to facilitate the strengthening of bilateral ties, assess regional developments in the country and set goals regarding future projects.

Reiterating that his Turkish delegation included more than 100 businesspersons, President Erdoğan said, "We have seized the opportunity to assess the kinds of investments our businesspersons can make in Madagascar in collaboration with representatives of the Malagasy business world."

In terms of trade, bilateral ties between Turkey and Madagascar have gained momentum since the Turkish Embassy was opened in the country. The president pointed out that since the embassy opened, trade volume increased from $12 million in 2005 to $60 million following the opening of the embassy in Madagascar. He also said the current value of trade volume does not adequately reflect the two countries' potential, stressing the importance of seeking ways to increase this value. He also expressed that increasing the number of Turkish Airlines (THY) flights would further boost trade volume.

Erdoğan pointed out that he was informed by Madagascar's President Rajaonarimampianina about the "2015-2020 National Development Project" which will peak the interests of Turkish entrepreneurs interested in the projects within the scope of the project. Erdoğan said: "I believe there are very significant opportunities for both countries in the fields of tourism, mining, agriculture, seafood and construction. Our [Turkish] contractors, who are second in the world in terms of infrastructural investments, have many projects to carry out."

Touching on the fact that Madagascar has tremendous potential thanks to its natural underground resources, arid land, water resources and tourism opportunities, Erdoğan suggested that by establishing hydroelectric power plants especially - utilizing the natural water resources in the country - serious steps can be taken to meet Madagascar's energy requirements. The president noted: "Among the entrepreneurs who come here with me are also prominent names in the field. We need to act on it by joining forces," Erdoğan said.

President Rajaonarimampianina drew attention to the delegation accompanying President Erdoğan on his visit, stressing that this large delegation is indicative of the high level of importance Turkish authorities have given to this visit.

Rajaonarimampianina noted that relations between Turkey and Madagascar have further improved since the opening of Turkey's Antananarivo Embassy, echoing the Turkish president's sentiments regarding direct THY flights to the country being scheduled by THY.

"The fact that the Turkish president is here further reinforces our bilateral relations. Today, we have conducted a 'general horizon' tour within the scope of both the international arena and Africa. We are aware that there can be no social and economic development without peace and security in the world," Rajaonarimampianina said, underlining that they give weight to a "win-win" policy in terms of international relations. "We can implement a build-operate-transfer model in our country. We have seen good examples of this in Turkey," Rajaonarimampianina said.

Underlining that steps have been taken to strengthen bilateral relations in the fields of aviation, tourism and transportation, Rajaonarimampianina also announced that during negotiations, they agreed to take substantial steps in the fields of energy and education, as well.

Four agreements were signed in various fields between Madagascar and Turkey on Wednesday during President Recep Tayyip Erdoğan's official visit to the country as a part of his three-day African tour.

Economy Minister Nihat Zeybekci signed the "Protocol on the Application of Financial Aid" between the two countries.