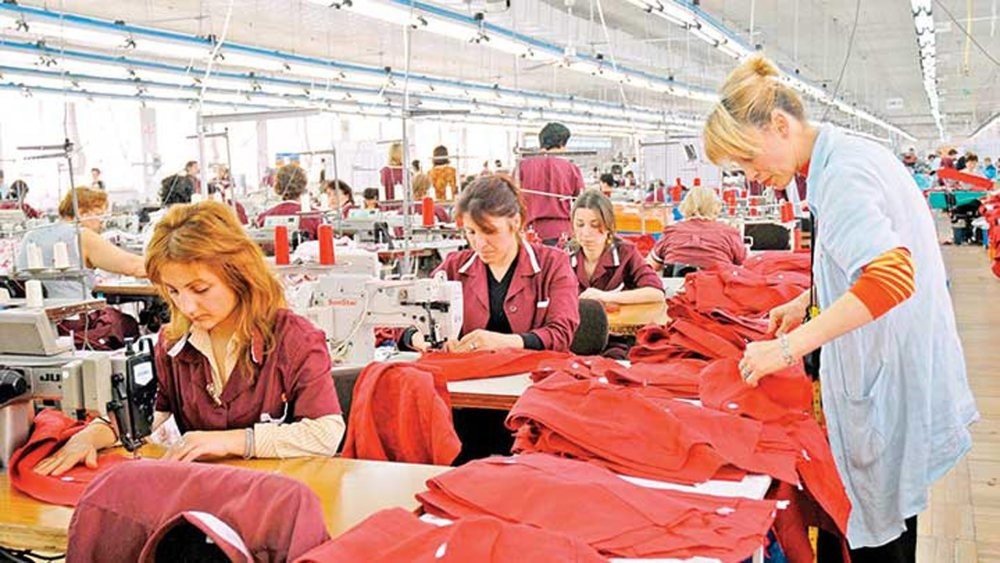 The Turkish Industrial Development Bank and French Development Agency joined forces with a view to supporting womenu2019s employment in Turkey.
by Daily Sabah with AA Feb 18, 2017 12:00 am

"Turkey has taken very serious steps on this. As France, we stand by Turkey with all the steps ahead. Both the TSKB and the AFD give their commitment very seriously," Maillet said.

TSKB General Manager Suat İnce stated that the social dimension of development is of great importance for establishing a contemporary society and spreading prosperity to all segments, saying: "The way to social development is through saying 'people first.' We also set out with the AFD, saying 'people first,' and focused on how we can contribute to society in this regard. Today, our women's employment and occupational health and safety support program that brings us together today is a result of this common goal."

"At the TSKB, we are aware that these rates will only become meaningful as they become more widespread. We believe that women's participation in the workforce in different companies and sectors represents a great potential in terms of economic and social development goals," İnce noted, recalling that he worked with female managers for the majority of his work life and felt better.

AFD Turkey Group Director Bertrand Willocquet expressed their pride in sharing a common vision for the environmental and social development of the Turkish economy within the scope of long-term and quality business cooperation with the TSKB for more than 10 years and pointed out the importance of the project that the TSKB and the AFD are introducing.

Stressing that this collaboration is also a first of its kind for the AFD, Willocquet said that they finance a scheme that directly targets women's employment through the banking sector for the first time, adding that they chose to work with the TSKB because of its dynamic, innovative nature. "We have no doubt that the TSKB will achieve great success with this project, as it has done in other works carried out to date," Willocquet said and added, "The successes achieved with this project will provide concrete gains in terms of the whole Turkish economy and its companies, while also motivating us to develop similar projects in other countries where we operate."

Support for projects of 'woman-friendly' companies

Within the scope of the loan of 100 million euros provided by the TSKB from the AFD, women-friendly companies' investment projects that meet the sustainability criteria will be supported.

With the "Women Employment Management Tool" included in the TSKB's loan assessment process, companies' applications in this area will be evaluated. Companies that set targets to increase women's employment and provide equality of opportunity will be able to benefit from this loan.

According to the latest employment data announced by the Turkish Statistical Institute this week, the labor force participation rate (LFPR) was 52.1 percent, up 0.9 percentage point or 980,000. While The LFPR for males was 71.9 percent, the rate for females was 32.7 percent.

A study prepared by Sabancı University's Corporate Governance Forum lays out that women are underrepresented in the boards of companies as well. According to the research, in 2015, 293 women held 375 directorships on the boards of companies listed on Borsa Istanbul (BIST). In 2015, 178 BIST companies still had no female director on their boards. This number represents a slight increase in the ratio of companies with a female director compared to 2014. In 2015, 53.7 percent of the companies had at least one female board member while this figure was 52.9 in 2012. Currently 42.7 percent of the BIST companies have an all-male.

Recalling that Woman 20 (W20) was established for the first time under the chairmanship of G20Turkey, KAGİDER President Oktar said, "As G20 countries, we aim to include 100 million women in the workforce." Pointing out that given the employment of the top 100 most profit-making companies in both Turkey and the world use a balanced proportion of men and women, Oktar said: "We have some genetic decision-making and leadership skills. For example, men are more analytical and faster, while women are more inclusive and instructive. If you use these two strengths together in the decision-making process, you get smarter and more efficient results." board.