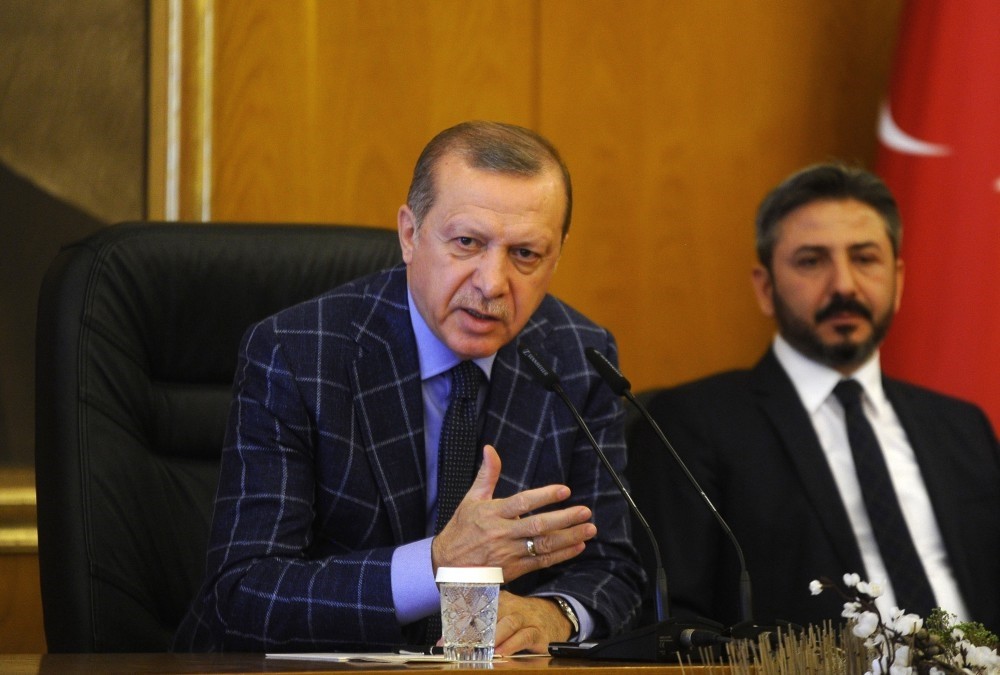 President Erdou011fan held a press conference before leaving for Pakistan where he will participate in the 13th Economic Cooperation Organization Summit.
by Daily Sabah Mar 01, 2017 12:00 am

As Turkey seeks to strengthen its role in Eurasia and with its partners in the region, it aims to conclude trade deals that will contribute to the economic growth of the countries in the region. To that end, Turkey and other members of the ECO are going to adopt the new 2025 vision as a road map

President Recep Tayyip Erdoğan, before leaving for the Economic Cooperation Organization's (ECO) 13th summit in Pakistan yesterday, shared details of the agenda and objectives of the summit, which is of great historical importance.

The president, who held a press conference prior to his flight on an official visit to Pakistan's capital Islamabad, talked about the new 2025 vision of the ECO, which will be adopted at the Islamabad meetings. Stressing the significance of a trade deal between the member states of the ECO, Erdoğan stated that the participating members of the ECO summit will adopt the 2025 vision with a view to further accelerate the process of realizing a trade agreement.

President Erdoğan noted that the continuous facing of some problems has to be acknowledged in order to realize the enormous potential of the ECO, saying, "Even though the population of the member countries constitutes 6 percent of the world population, the organization's share in world trade is only 2 percent."

He was speaking at a press conference at Atatürk Airport prior to his flight to Pakistan's capital Islamabad, stating that bilateral talks will also be held with leaders attending the 13th ECO Summit.

Saying that the organization was established in 1985 with Pakistan and Iran in order to increase efforts for collaboration and development, President Erdoğan said Turkey is one of the founding members of the ECO, which currently covers an area of 8 million square kilometers with a population of 400 million and includes 10 countries. The organization has improved and expanded its activities with the participation of more countries.

Noting that the ECO has great potential, Erdoğan affirmed that the Islamabad Summit is being held at a time when critical and historical events are taking place.

"We are going through a period when the weight of Eurasia on the world's political, commercial, and economic scene has begun to increase. The main theme of the Islamabad Summit consists of linking transport, communication and trade lines for regional prosperity," Erdoğan declared, saying a close relationship was needed for regional prosperity, and linking transportation, energy, communication, and trade sectors should be done, as the theme says.

"The organization is a valuable platform for coordinating our efforts and turning them into result-oriented actions," President Erdoğan noted, adding that Turkey has made a serious contribution to the strengthening of the organization with some mega projects that it has recently realized, and that projects such as the Marmaray, the Eurasia Tunnel, the Yavuz Sultan Selim Bridge, Osmangazi Bridge and high-speed railways have strengthened the capacity of not only Turkey but also other member countries.

"I believe that projects such as the Istanbul New Airport, which is currently under construction, will accelerate this process," Erdoğan said.

Pointing out that railway connections, such as Baku-Tbilisi-Kars, will also make a significant contribution to this regard, Erdoğan said he believed the Islamabad Summit was a historic opportunity, and continued: "We must eliminate the commercial barriers among member countries. For this reason, we want to put the Trade Agreement, which is an important tool for commercial liberalization, into action as soon as possible."

Stressing the special importance they attach to putting this agreement into force with the widest participation, Erdoğan said they hoped the 2025 ECO Vision will be approved at the Islamabad Summit as a road map to accomplish these goals.

"We will do our part and increase the efficiency of the organization and realize the summit decisions as we have done up until now. I believe the ECO will become even stronger as a regional alliance platform and will further enhance its effectiveness," Erdoğan concluded.
RELATED TOPICS