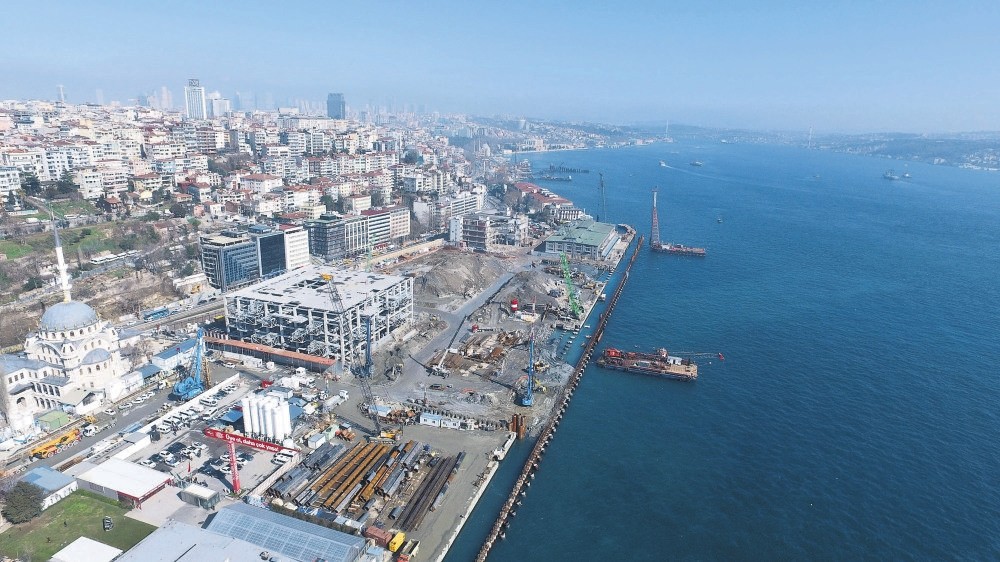 Almost 4.5 billion Turkish liras will be invested in the Galataport Project, located in the area that connects Karaku00f6y and Tophane, two Istanbul districts of historical value. (DHA Photo)
by Daily Sabah Mar 04, 2017 12:00 am

The Galata Port Project, with an investment of some TL 4.5 billion, has started. Covering Karaköy and Tophane in Istanbul, the project is expected to change the face of these neighborhoods, while offering a new entryway to Istanbul's unique culture

Protection and restoration work to be carried out as part of the Galataport Project has started.

At a very crucial point in Istanbul having survived centuries as the gateway to the sea, Galata Port will have various functions, stemming from a new project that adds additional value to Istanbul as a center of culture, tourism and commerce.

Salıpazarı Port Management and Investments Inc. announced that protection and restoration work at the Galataport Project started with the completion of necessary approvals from all relevant official institutions and agencies. The company's statement was issued due to comments and allegations made by various non-governmental organizations and social media accounts about the project. The statement says that the Galataport Project will make a significant contribution to the economy in regional and macroeconomic terms and contribute to tourism in various fields of activity and investment. Construction and restoration work for the project is being conducted at full speed.

According to the statement, "Protection and restoration work with respect to cultural assets, which are an important part of the identity of the city, located at the Galata Port, has started with the completion of the necessary permission from all relevant official institutions and agencies.

"With regard to our statement on Feb. 18, we determined sections where the Karaköy Passenger Hall can be strengthened and sections that are not strong enough even for protection work that has a holistic architectural character and design originality that could be damaged by possible reinforcement work. We planned work considering these two sections."

As a result of research on the carrier system conducted as part of the project, the connection between protected parts and risky parts has been broken down and the two parts have been separated in a controlled manner since the structure does not meet the criterion of "safety of life." Necessary precautions have been taken in the area to be protected, while parts that threatened life have been destroyed.

The Karaköy Passenger Hall will be rebuilt with the original details, size and occupancy vacancy rates in accordance with their architectural character and design originality, which is important for modern period buildings within the scope of the restoration project approved by the 2nd Regional Directorate of Cultural Heritage Protection."

Merkez Rıhtım Han, built in 1912, is located on the Karaköy seaside, close to the ferry docks. The restoration for the building was drawn up in accordance with fundamental protection principles. Çinili Rıhtım Han, built in 1911, will also be restored as part of the Galataport Project. Nusretiye Saat Kulesi (Nusretiye Clock Tower), also known as Tophane Saat Kulesi, was built in the second half of the 19th century and will also be restored.

TL 4.5 billion ($1.2 billion) will be invested to create a brand new living environment. Within the framework of the financing agreement signed with a consortium of leading Turkish banks, consisting of Garanti Bank, Yapı Kredi, İş Bank, Ziraat Bank, Industrial Development Bank of Turkey (TSKB) and Finansbank, the project is expected to be finished in the last quarter of 2018. Due to its field of activity and investment, the Galataport Project is expected to contribute TL 5 billion to the tourism sector, with over 20 million visitors expected.

In the area that connects the historical districts of Karaköy and Tophane, the project covers over 1,200 meters zone with an open area of 100,000 square meters and a construction area of 151,66 square meters, where existing buildings will be harmoniously renovated, while respecting their authentic forms and acquire new functions.

Once finished, both tourists and natives of Istanbul will benefit from the resources on a 24-hour basis throughout the year: An art museum, hotels, restaurants, bars, fast food joints, a variety of souvenir shops, shopping centers, office spaces, exhibition and fair areas, car parks and various sales points, ensuring an accountable return from the project. The cruise port in the project area will continue to serve as Istanbul and Turkey's gateway to the rest of the world, only now the port will be a world-class destination.