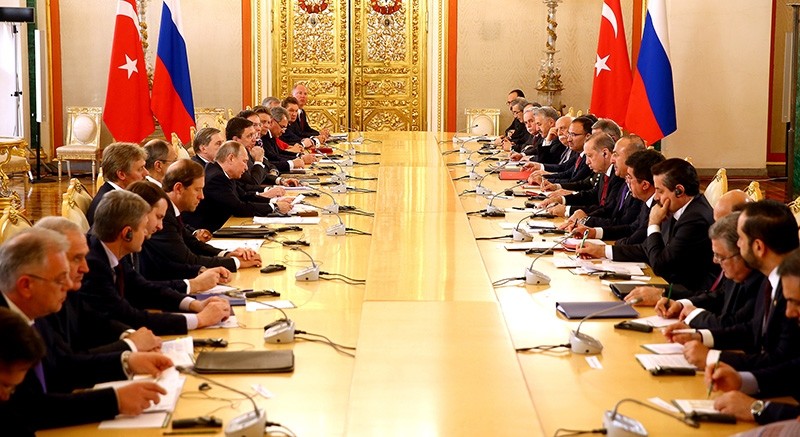 During a high-level cooperation meeting in Moscow, both President Erdoğan and his Russian Counterpart Putin emphasized the necessity for more collaboration. A memorandum of understanding on the establishment of a joint investment fund worth $1 billion was signed

President Recep Tayyip Erdoğan paid an official visit to Russia on Friday, and with Russian President Vladimir Putin held a two-and-a-half-hour meeting in which economic issues, energy and military cooperation, the lifting of some travel restrictions on Turkish nationals, and import restrictions on Turkish companies and food products were the main topics.

A number of collaboration agreements in energy, trade, intellectual property have been signed on March 10 during President Recep Tayyip Erdoğan's one day visit to Moscow. The most prominent agreement was the memorandum of understanding signed to establish a joint investment fund between the Russian Direct Investment Fund (RDIF) and the Turkish Wealth Fund (TWF), in a bid to further increase bilateral economic ties and boost investment flow. The agreementl was signed by TWF Director General Mehmet Bostan and RDIF CEO Kirill Dmitriev. President Erdoğan announced at a subsequent joint press conference that the capital of this joint investment fund will be $1 billion.

Ahead of the tête-à-tête meeting between the two leaders, Erdoğan said that energy cooperation between Turkey and Russia is "increasingly" developing, especially the TurkStream natural gas pipeline project and Akkuyu nuclear power station in southern Turkey.

Russian President Putin said he was very happy that the inter-state relations between the two countries are restoring quickly.

"Many events have happened, and lately we have been working actively to bring Russian-Turkishrelations to the level worth our countries." he added

According to President Erdoğan, one of the important issues discussed at the Turkey-Russia High Level Cooperation Council (HLLC) meeting was work to revitalize the visa-exemption agreement that benefits both sides. Addressing Russian authorities he said, "I know that you are working on some formulas for our businessmen, drivers who carry cargo to Russia, aircrew and official passports. Our desire is to secure visa exemption as soon as possible."

Erdoğan also indicated that they need to act quickly in taking the necessary steps to improve the economic relations of the two countries, which should be done with agreements that will strengthen the ground for lucrative economic collaboration. He also added that the existing sanctions related to the issue should be abolished immediately.

In the joint press briefing after the presidents' meeting, Putin gave a green light to his Turkish counterpart's demand. "We will lift business visa restrictions on Turkish companies," he said.

With regards to scheduled flights, Erdoğan underscored that the introduction of unlimited frequency and diversification of flight destinations in both countries is of utmost importance. Moreover, the president also said that the inclusion of Turkish manufacturers as suppliers for Russia's MS21 airplanes is an important issue for trade between Turkey and Russia.

Touching upon the strong energy collaboration between Turkey and Russia, President Erdoğan referred to the developments in the TurkStream natural gas pipeline project. As the agreement has been ratified by both states, it has entered into force and is expected to accelerate the construction process.

With regards to the Akkuyu nuclear power plant project, Erdoğan stated that Turkey is carrying out all the liabilities it assumes within the scope of the agreement concluded with Russia.

As tourism was hit by strained relations following the downing of a Russian jet in November 2015, both countries are seeking to recover the losses from the period. President Erdoğan stated the necessity to garner the momentum that both countries lost in the last one and half years. "By starting to use Mir card, the payment processes will speed up," the president noted.

Mir card is an initiative by the Russian government that is planned for widespread use across the country. The card will be promoted abroad under co-badging projects with international payment systems. The Russian national payment system was created on 23 July 2014. In Spring 2015, in the course of an all-Russia creativity competition, the name Mir and the brand logo were chosen. The Operator of the Mir Card Payment System is the National Card Payment System Joint-Stock Company.

Speaking at the HLLC meeting, Russian President Putin announced that Turkey and Russia plan to start using local currencies in trade transactions, which will contribute to the expansion of trade volume between the two countries.

He drew attention to the decreasing volume of trade between the two countries. In 2016, the trade volume decreased by 30 percent, Putin stated. "Our trade volume currently hovers around the same level as it was 10 years ago. I hope we will overcome this negative trend this year. Active and intensive work awaits us," the Russian president said.

Emphasizing the importance of robust collaboration between the members of the Organization of the Black Sea Economic Cooperation (BSEC), President Erdoğan expressed that Turkey will be pleased to welcome Russian authorities at the BSEC summit, which will be held on May 22.

The Black Sea Economic Cooperation (BSEC) came into existence as a unique and promising model of multilateral political and economic initiative with the signing of the Istanbul Summit Declaration and the Bosphorus Statement by the Heads of State and Government of the countries in the region, on 25 June 1992.

With the entry into force of its Charter on May 1, 1999, the BSEC acquired an international legal identity and was transformed into a full-fledged regional economic organization - the Organization of the Black Sea Economic Cooperation.

Meanwhile before President Erdoğan's visit to Russia on Friday, Prime Minister Binali Yıldırım held a phone call with his Russian counterpart Dmitry Medvedev about the import sanctions on certain agriculture produce from Turkey. Although the sanctions on some of the produce were lifted, the import restrictions on grapes and tomatoes still remain.

According to the decree signed by the Russian prime minister, the imports of fresh or frozen cauliflower, broccoli and cloves from Turkey is permitted. The import ban on the largest import items, which are tomatoes and fresh grapes continues.

In October, the Russian Federation lifted the ban on oranges (fresh or dried), mandarins, clementines and similar citrus products, apricots, peaches and plums.