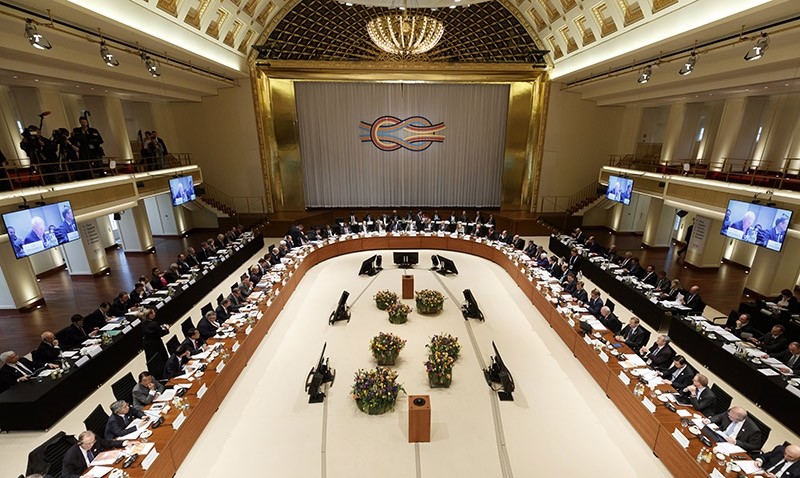 Members of G20 sitting in the Convention Center during the G20 Finance Ministers and Central Bank Governors Meeting at the Kurhaus in Baden Baden, Germany, 17 March 2017. (EPA Photo)
by Associated Press Mar 18, 2017 12:00 am

The world's top economic powers have failed to agree on a joint position explicitly opposing trade protectionism amid pushback from the U.S. government.

Finance ministers at the Group of 20 meeting issued a statement Saturday that was milder than their last one, from 2016.

It said that countries "are working to strengthen the contribution of trade" to their economies. By comparison, last year's meeting called on them to resist "all forms" of protectionism.

The statement, while nonbinding, is important as it helps set the tone for global economic and financial policy. Protectionism can include border tariffs and rules that favor a country's businesses over those in another economy.

Wolfgang Schaeuble, the finance minister of host country Germany, sought to play down any disagreements. He told reporters after the two-day meeting that the issue was more wording than substance.

"It's not true we are not agreed. It's completely clear we are not for protectionism. But it wasn't clear what one or another meant by that."

Trump, who campaigned on an "America First" platform, has already pulled the U.S. out of the proposed Trans-Pacific Partnership agreement with Japan and other Pacific Rim countries. He also has started the process to renegotiate the North American Free Trade Agreement with Mexico and Canada.

During the meeting, European countries and China were said to be pushing for a stronger stance in favor of free trade and cooperative, multi-country frameworks for trade such as the World Trade Organization.

Chinese Finance Minister Xiao Jie said his country would "unswervingly oppose trade protectionism." Canada, like China a major trade partner of the U.S., took a nuanced approach, with Finance Minister Bill Morneau said to support a general statement on the importance of trade for growth — while not insisting on particular language.

The G-20 is an informal forum on economic cooperation made up of 19 countries plus the European Union. The finance ministers' meeting will pave the way for a summit of national leaders in Hamburg, Germany, on July 7-8. Its decisions don't have the same force as an international treaty but simply depend on individual countries' promises to follow through on them.