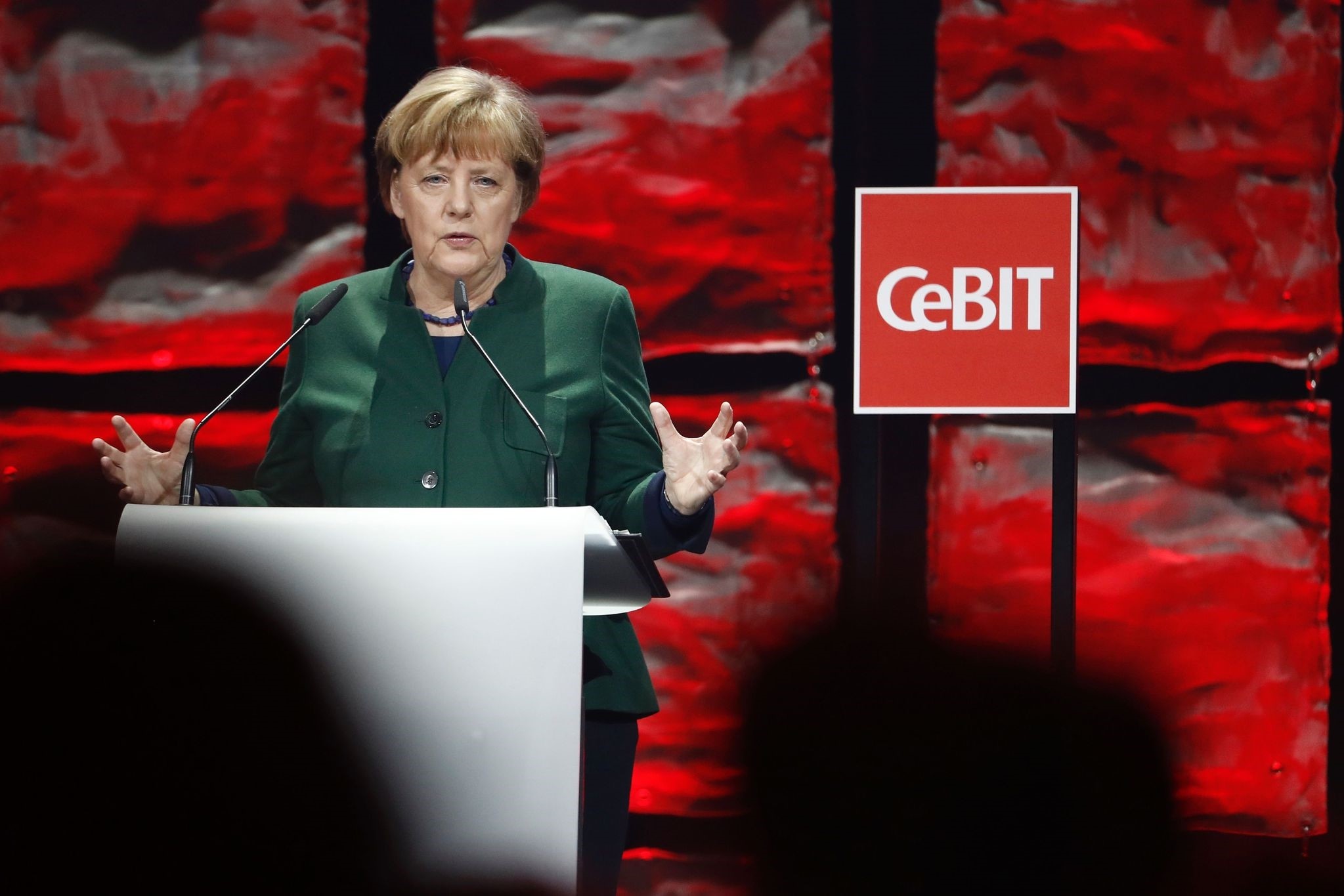 Merkel delivers her speech at the official opening of the CeBIT technology fair in Hanover, central Germany, on March 19, 2017. (AFP Photo)
by Daily Sabah with Agencies Mar 19, 2017 12:00 am

Chancellor Angela Merkel reiterated on Sunday that Germany was strongly in favour of free trade and open markets after the recent G20 meeting ended as a failure of the world's financial leaders to agree on resisting protectionism, which poses a risk for growth of export-driven economies such as host Germany.

"We do want open markets, fair trade, we certainly don't want any barriers but at a time of an 'Internet of things' we want to link our societies with one another and let them deal fairly with one another, and that is what free trade is all about," Merkel said at the CeBIT technology fair in Hanover.

Speaking after Japanese Prime Minister Shinzo Abe told the same event that the European Union and Japan should soon reach an economic deal, Merkel said: "It's very, very good that Japan says we want a free trade agreement, we want it soon because that could be the right statement and Germany would love to be a propelling drive behind this."

On Sunday, after acquiescing to an increasingly protectionist United States after a two-day meeting in the German town of Baden-Baden, the finance ministers and central bank governors of the 20 biggest economies dropped a pledge to keep global trade free and open.

Instead, they only made a token reference to trade in their main communique by saying the G20 would work together to strengthen the contribution of trade to their economies.

"The weak wording on trade is a defeat for the German G20 presidency," Ifo economist Gabriel Felbermayr told Reuters.

"This is particularly true in the light of the fact that Germany is one of the world's strongest export nations and relies on open markets to maintain its prosperity like hardly any other country."

"The lack of a rejection of protectionism is a clear breach of tradition. Now everything is possible," Felbermayr said. The future would probably bring a weakening of the World Trade Organization (WTO) and a more aggressive use of protectionist policies, he added.

The Association of German Chambers of Commerce and Industry (DIHK) said the token reference to trade was a serious setback for the multilateral trade order.

"The result is a warning shot for every trading nation and this means also for the German economy," DIHK foreign trade economist Volker Treier told Reuters.

"The German economy has to adapt itself to the fact that 'America First' will also mean a loss for us. So instead of a win-win situation, there will probably be a lose-lose situation."

German Vice Chancellor Sigmar Gabriel has suggested that the European Union should refocus its economic policy toward Asia, should the Trump administration pursue protectionism.

German Finance Minister Wolfgang Schaeuble tried to play down the lack of a clear rejection of protectionism on Saturday, saying some delegations did not have a mandate to support far reaching commitments on commerce.

U.S. President Donald Trump has already pulled out of a key trade agreement and proposed a new tax on imports, arguing that certain trade relationships need to be reworked to make them fairer for U.S. workers.

Germany managed to rescue some of the previously common G20 language supporting free trade and open markets in a separate document adopted by policymakers in Baden-Baden.

The list of principles summarizes reform recommendations for governments to boost the resilience of their economies against future shocks, including the advice to strengthen policy frameworks to reap the benefits of open markets.

A senior G20 official said the resilience principles were probably more important than the main communique because the list would also be adopted at the G20 leaders summit in Hamburg in July while Baden-Baden was only a "snapshot of today".

"The German G20 presidency is not over yet. Now it's up to the state and government leaders at the G20 summit in Hamburg to send a clear signal," Treier said.