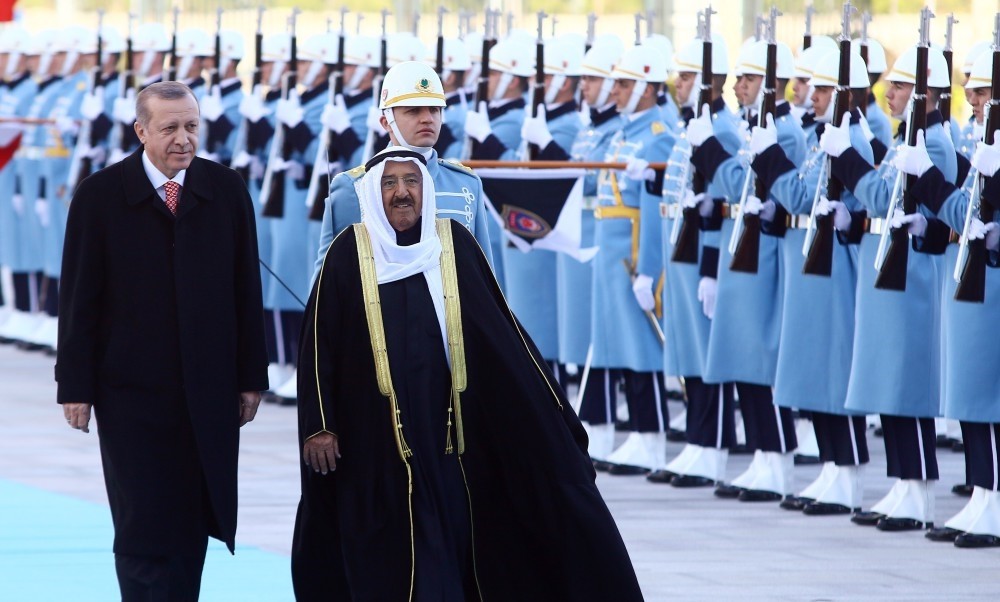 President Erdou011fan welcomed yesterday Kuwaiti Emir Sheikh al-Sabah in the presidential palace in Ankara with an official ceremony.
by Anadolu Agency Mar 22, 2017 12:00 am

Kuwaiti Emir Sheikh al-Sabah held official talks in Ankara yesterday at the start of a three-day visit to Turkey. The two countries are seeking ways to boost relations both in political and economic arena

Kuwaiti Emir Sheikh Sabah al-Ahmad al-Jaber al-Sabah was received in Ankara on Monday by President Recep Tayyip Erdoğan at the start of a three-day visit, during which he is expected to meet a host of officials.

The emir's visit is seen as yet another step in the development of Turkish-Kuwaiti relations, which Erdoğan recently described as "excellent." The visit is the fourth such Turkish-Gulf meeting in the last five weeks after Erdoğan met the leaders of Bahrain, Saudi Arabia and Qatar during a tour of the region in mid-February.

It is the third meeting between Erdoğan and the Kuwaiti emir in the last two years. Last April, they met in Istanbul for an Organization for Islamic Cooperation (OIC) summit and a year earlier, the president went to Kuwait to discuss Turkey's relations with the Gulf Cooperation Council (GCC), of which Kuwait is a leading member.

While in Kuwait, Erdoğan stressed the desire of many Turkish entrepreneurs to develop economic ties. The repeated visits and contacts reflect both sides' commitment to exchanging views and coordinating efforts to promote bilateral ties in a host of fields. According to Erdoğan, Kuwait represents Turkey's economic gateway into the Gulf, while Kuwait sees Turkey as its path into Europe and central Asia.

According to Development Minister Lutfi Elvan, who recently visited Kuwait, economic ties are developing rapidly, with Turkish contractors now carrying out some $6.3 billion worth of projects in the oil-rich Gulf kingdom. Elvan highlighted the Kuwait International Airport project, which is being conducted by Turkey's Limak Holding. In 2015, Limak won the tender for construction of a new terminal at the airport for a total cost of $4.3 billion, the largest tender won abroad in a single package by Turkish contractors. Limak Holding chairman Nihat Özdemir said recently that the company hoped to complete the new terminal within four years, two years ahead of schedule.

According to Elvan, Kuwait plans to initiate several massive projects, worth around $150 billion, over the next five years. He went on to say he hoped Turkish firms would secure the lion's share of these. The Kuwait Investment Authority remains active in Turkey, particularly in the real estate, retail, banking and air transport sectors, as well as in the Turkish stock market.

According to Kuwait's official KUNA news agency, Kuwaiti investment in Turkey hit $5 billion in 2015, especially after the implementation of Turkey's freehold property ownership law, which allows Gulf citizens to own property in Turkey. Kuwait is now one of the top five foreign investors in the country.

The Kuwait Turk Participation Bank, founded in 1989, is an example of the burgeoning economic cooperation between the two countries and in terms of overall asset size; the bank is now considered one of Turkey's leading Islamic banks. Meanwhile, according to the GCC Chambers of Commerce Union, commercial exchanges between Turkey and Kuwait currently stand at around $2 billion, KUNA reported.

According to Tamer, the bilateral trade volume between Turkey and Kuwait stands at around $700-880 million outside of contracting services. "We need to take this [figure] further," he stressed, underlining that Turkish markets are not represented enough despite "intense" demand for the country's products.

Tamer noted the negative effect fighting in Iraq and Syria has had on trade of, particularly in the export of vegetables, fruits and dairy products. "Transport via air is difficult. Sea transportation is not preferred because it takes two months," he added.

Tamer referred to the defense industry as another area of cooperation between the two countries, which have held joint military exercises. Turkey sold 80 armored personnel carriers and 12 anti-riot water cannon vehicles - or TOMAs - to Kuwait, which has expressed interest in cooperating with Turkey in pilot training, the envoy said.

In terms of tourism, Turkey now represents a premier holiday destination for Kuwaitis, with more than 70,000 visiting the country in 2014, compared to only 20,000 four years earlier. Turkey's political policies, too, are deeply aligned with those of GCC member states.

Turkey backs a Saudi-led military alliance that supports Yemen's internationally recognized government against the Houthi militia group. Both Ankara and the GCC want to reach a political solution to the conflict.

Turkey, which currently holds the OIC's rotating presidency, supports a host of Islamic causes, not least of which is the Palestinian aspiration for statehood.

After last July's attempted coup, Kuwait was one of the first countries to express its support for Turkey and the emir called Erdoğan to congratulate him on defeating the coup.

Turkey-Gulf ties were cemented further at a Gulf foreign ministers' meeting last October in Riyadh, where the GCC officially designated the Gülenist terror cult (FETÖ), widely believed to have orchestrated the coup bid, a terrorist group. In addition, a final communique issued after the meeting authorized the GCC's secretariat-general to follow up on "strategic cooperation" between the GCC and Turkey.
RELATED TOPICS