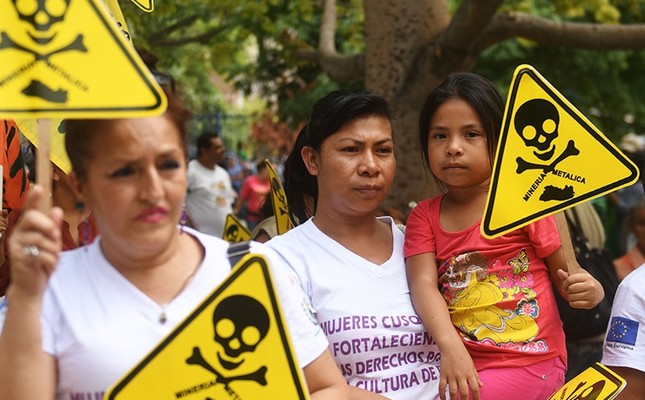 Salvadorans participate in a protest against mining outside the Legislative Assembly in San Salvador on March 29, 2017. (AFP Photo)

El Salvador's Congress on Wednesday approved a law prohibiting all metal mining projects in a bid to protect the Central American country's environment and natural resources, one of the first countries to enact such a broad ban.

The new law, which enjoyed cross-party support from 70 lawmakers, blocks all exploration, extraction and processing of metals, whether in open pits or underground.

Environmentalists have noted that some other countries have enacted bans on strip mining, open-pit or heap-leaching techniques. But the bill passed Wednesday in El Salvador would not allow any underground, above-ground or artisanal mining for metals.

The legislation prohibits the use of toxic chemicals like cyanide and mercury for exploration, extraction or processing ore and makes permanent an executive order passed by former President Antonio Saca in 2009 and renewed by subsequent administrations. Proponents say the measure is needed to protect the water supply.

Mining for non-metallic substances like salt, stone or sand would still be allowed.

Several regions of the country have attracted interest from international gold and silver mining companies. Exploration has revealed deposits of gold and silver, but El Salvador has no large-scale metal mining.

In October, El Salvador won an arbitration at the World Bank's International Centre for Settlement of Investment Disputes (ICSID) against the Australian-Canadian miner OceanaGold Corp, which was seeking $250 million over the 2009 denial of an extraction permit.

In its decision, the ICSID ordered the company to pay El Salvador $8 million for legal costs.