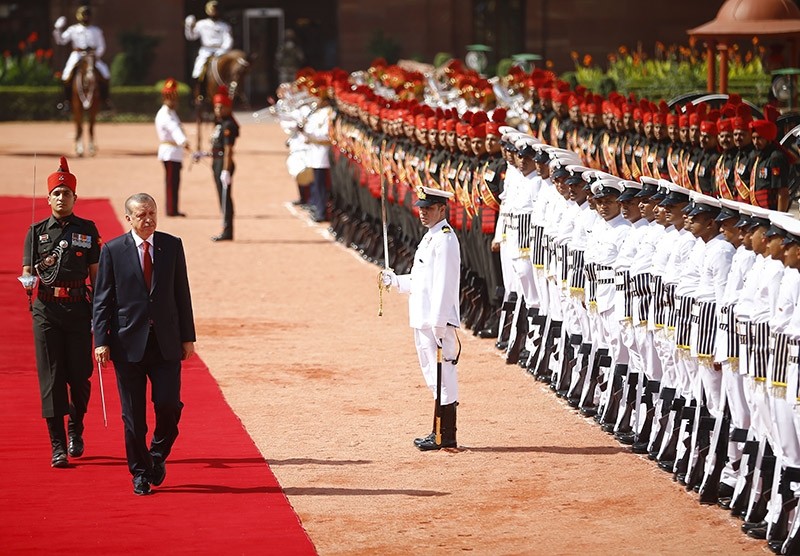 President Recep Tayyip Erdoğan highlighted Monday that it is important for Turkey and India to boost bilateral trade.

Attending the India-Turkey Business Summit in New Delhi, as part of a two-day official visit, Erdoğan said that Turkey is determined to enhance relations and will take measures to ensure this.

He noted that the volume of bilateral trade has reached $6.5 million in 2016, calling it a "pleasing development."

"We believe it is significant to boost bilateral trade" Erdoğan said, while he praised India, a member of the G-20 for being the "largest democracy in the world."

"India is currently one of the largest and fastest growing free economy in the world" Erdoğan said.

The president also said Turkey expects more Indian tourists to visit the country, adding that Turkey is especially a favorable destination for couples to spend their honeymoon.

The president was warmly welcomed in an official ceremony and was greeted by Indian President Pranab Mujherjee and Prime Minister Narendra Modi.

He later laid a wreath at a monument to the memory of Mahatma Gandhi, the internationally renowned pacifist campaigner for Indian independence from the then British Empire.

Erdoğan's two-day visit is the first trip at the presidential level from Turkey to India in seven years.

Talks are expected to cover the fight against terrorism, efforts to boost bilateral ties, the prevention of Gülenist Terror Group (FETÖ) activity in India and New Delhi's membership of the Nuclear Suppliers' Group (NSG).

Erdoğan's visit is also expected to see the signing of a cultural exchange program between the two countries.

India -- which has the second-largest Muslim population in the world -is a member of the G-20- and is one of the so-called BRICS countries -- a group of five major emerging economies along with Brazil, Russia, China and South Africa.