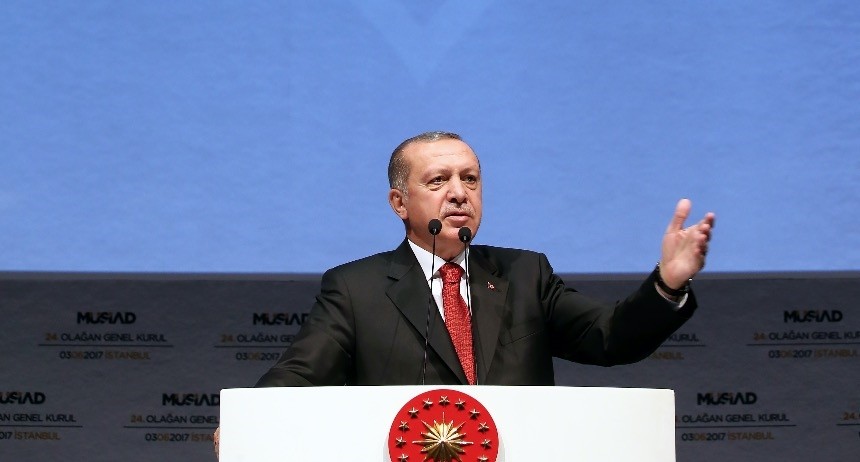 At the 24th Ordinary General Assembly of Mu00dcSu0130AD, President Erdou011fan addressed business people, urging them to take concrete action for investments.
by Daily Sabah Jun 05, 2017 12:00 am

As a president who often speaks to members of the business world urging them to launch campaigns in collaboration with the government and take bold actions, Erdoğan once again addressed business owners, encouraging them to be more courageous in taking action to boost the local economy

On Saturday, President Recep Tayyip Erdoğan called on Turkish businesspersons, urging them to increase their investments saying, "Now, it is time to invest."

In an address to the Turkish business world at the ordinary General Assembly of the Independent Industrialists' and Businessmen's Association (MÜSİAD), President Erdoğan said, "I want to call on all businessmen, especially members of MÜSİAD: If we value our country, if we love our country, if we want to pay our debt to these lands, it is time to act now."

Addressing businesspeople across the country, Erdoğan stated that business professionals and investors must take action now to further develop the country economically.

"We will work harder. It is time to make investments. Never delay doing business. Do not lose your spirit of entrepreneurship and investment. If you make use of investment opportunities at such a time, the future will be much more fruitful," he said.

Erdoğan also emphasized that the government is providing major incentives, from loans to employment, for anyone who wants to make investments and grow their business, adding that they expect businessmen to take advantage of this and quickly take action.

"I truly believe in MÜSİAD members in this regard. We will build the new Turkey together," he said.

Erdoğan requested that all Ministries prepare a short-term action plan of 180 days in attempts to resolve the accumulated problems of the Turkish people, with programs that will be made public when preparations are completed.

According to Erdoğan, preparations for a much more comprehensive program, including the period leading up to the 2019 elections, are already being carried out and the 2023 vision goals are being updated while a new study for these goals has also been initiated.

Erdoğan further said that the economy has started to show signs of being on a better course, adding that there is a clear, steady rise in exports.

Relaying the signs of an uptrend according to Erdoğan, Turkey's annual exports, which dropped to $142.5 billion in 2016, reached $147 billion by the end of May.

The president also underline that the government will work harder to achieve these goals, noting that employment mobilization has begun bearing fruits.

Meanwhile, Erdoğan also explained that they achieved a rise of 1.2 million in employment thanks to contributions made by the business world, vowing that they will closely follow whether the promises in this regard will be fulfilled.

Erdoğan said that those who attacked democracy, freedom and the future of the country in the July 15 coup attempt also attacked the economy, underscoring that terrorist attacks and attacks on the democratic order of Turkey are also attacks on the Turkish economy.

He said that despite the Gezi Park protests and the Gülenist Terror Group's (FETÖ) attacks on December 17, 2013 and December 25, 2013, the Turkish economy grew by 8.5 percent in the same year. Referring to local and presidential elections that were held in 2014, Erdoğan also noted that the economy grew by 5.2 percent that year.

"Despite two elections in 2015 and escalating terror incidents, we challenged those who masterminded these incidents by achieving 6.1-percent growth in the economy. And even though we experienced a bloody coup attempt on July 15, the most severe trauma we faced in recent history, we engaged in an intense struggle against terror at home and abroad and achieved economic growth of 2.9 percent in 2016," Erdoğan added.

Touching on the rise in the Borsa Istanbul stock exchange and the fall in foreign exchange rates, Erdoğan said both of these indicate full confidence in the Turkish economy. Moreover, many indicators such as the surge in home appliance sales show that the wheels of the economy are turning increasingly faster.

According to the president, it is necessary to look at the economy with a broader perspective to understand Turkey's economic size. Referring to the fact that Turkey has attracted $183 billion in international investments since 2002, he said that the number of jobs has risen to 27 million. He said that by adding 6 million new jobs in the same 14-year period, Turkey became the only country in Europe to achieve such a high increase in employment.

Erdoğan stated that investments made by Turkish entrepreneurs exceeded $37 billion and the value of projects that Turkish contractors have undertaken abroad crept up to nearly $300 billion.

"We are carrying out intensive activities with our businessmen, non-governmental organizations [NGOs] and educators in the regions which we could not have dared to visit as tourists in the past," he continued.

Erdoğan noted that Turkey's total humanitarian aid reached $6.5 billion in 2016 alone, emphasizing that Turkey adopts the principle of working for the peace and welfare of Turkey and all of humanity.

To conclude, Erdoğan touched on the significant progress made in the country's health sector. He emphasized that the Turkish people used to go abroad for treatment in the past but last year, a total of 360,000 foreigners came to Turkey for treatment.

Meanwhile, Abdurrahman Kaan, former chair of Council of the Food and Agriculture Sector at MÜSİAD from 2006-2009 and deputy chair since 2012, was elected the new chair of MÜSİAD. In his inaugural speech, Kaan conveyed messages concerning the interest rate and highlighted the necessity to establish a new system to eliminate the interest rate in the economy.