Istanbul a potential base for China's trade operations, airline services to Europe 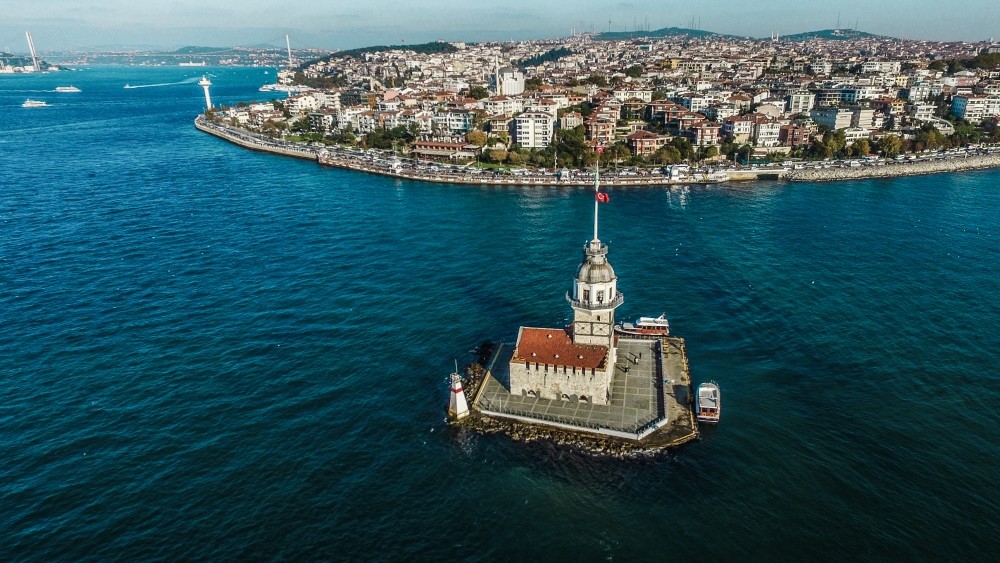 Istanbul, acknowledged worldwide for its unique location, is preparing to reinvigorate its title as the bridge between Asia and Europe. One prominent candidate, China, intends to be a part of this transformation by making Turkey's most populated city a base for its commercial activities

Istanbul, the city of glorious civilizations and empires, is now eyeing the title of "the capital of global transport hubs," as it carries out the construction of a new airport, the biggest infrastructure project ever undertaken by the Turkish Republic. With an estimated investment of 40 billion euros, this "may even be one of the largest infrastructure projects in the world," as Pat Cox, the former president of the European Parliament who moderated the Ministerial Session of the International Transport (ITF) 2017 in Leipzig, put it. Highlighting Istanbul's characteristics as an aviation hub and destination, the airport will increase the city's integration and connectivity to the world, boosting commercial relations with other countries by aspiring to draw airliners and global logistic companies to the city.

For instance, the Belt and Road initiative, unveiled by Chinese President Xi Jinping in 2013 to revive the ancient Silk Road, already promises strong connections among the global trade routes passing through Turkey, such large-scale infrastructure investments may and will provide alluring opportunities to transport and logistics companies of doing business in the region.

Another potential lucrative business opportunity also comes from the Far East as Chinese airlines and freight companies that currently do not operate in Turkey may also arrive.

Considering its geographical position and proximity, Istanbul can be an appealing candidate both for Chinese airlines that carry passengers to Europe and shipping companies carrying Chinese goods to the continent. Istanbul could even be a base for China's reach to Europe, in terms of transporting its goods to the European market as well as a European base for Chinese airliners.

Speaking to Daily Sabah at the ITF 2017 Summit in Leipzig, President of China Academy of Transportation Sciences Baolin Shi underscored that if the demand is secured, Chinese airliners could launch business operations in Turkey, particularly when the Istanbul New Airport, projected to serve approximately 200 million passengers around the world by 2025, becomes operational.

Pointing out Istanbul's location, Professor Shi said the city's position between Asia and Europe gives it a great competitive edge in becoming a global aviation hub from where both passengers and goods can be transferred across continents.

"I think Istanbul has a very good advantage because of its location between Asia and Europe," said Shi to describe his point and adding that this unique location is of vital importance to the Belt and Road project, of which Turkey constitutes the main corridor, beginning in western China and ending in Istanbul.

Concerning the possibility of Chinese airline and shipping companies to begin and expand operations in Turkey, particularly in Istanbul, Shi highlighted that if the demand is there, more Chinese firms will be doing business in Turkey.

"It depends on the trade operation, trade market and demands from China and Turkey," he said.

China is open to partnership with Turkey
​
Recalling the Belt and Road Forum for International Cooperation in May, which was attended by President Recep Tayyip Erdoğan, Professor Shi stressed that Turkey and China had some bilateral agreements for collaboration in infrastructure development, particularly in railway construction.

Shi further pointed out that China is willing to cooperate with Turkey in the construction of infrastructure projects that will boost the transport sector and contribute to the development of the Silk Road.

"What is important for China is the openness, transparency, and feasibility of projects," Shi said in regards to the transport projects, aiming to increase connectivity through the Silk Road.

To emphasize his country's willingness for increased collaboration, Shi cited the 533-kilometers Ankara-Istanbul high-speed railway, which was accomplished with an exemplary Turkish-Chinese partnership.

The China Railway Construction Corporation and the China National Machinery Import and Export Corporation won the bid in 2005 to build the railway line in partnership with two Turkish companies, Cengiz Construction and İbrahim Çeçen İçtas Construction. The project was financed in part by a $720 million loan granted by Chinese Exim Bank. This successful Turkish-Chinese partnership reinvigorated confidence for further collaboration between the two countries located on the two edges of the ancient Silk Road. 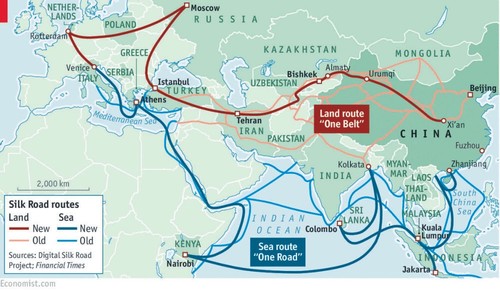 Turkey plans to build a 3,500-kilometers-long high-speed railway and an 8,500-kilometers-long fast track by 2023, the year that marks the centennial anniversary of the Republic. The country's railway network currently covers more than 12,532 kilometers (See Map 1 for Turkey's Railway Network) and the country aims to expand it to 25,000 kilometers by 2023 and further to 31,000 kilometers by 2035, according to the State Railways of the Turkish Republic (TCDD).

Beijing and Ankara were reported to have signed a Memorandum of Understanding (MoU) on harmonizing their Belt and Road and Middle Corridor initiatives in November 2015. According to the MoU, the two sides have been discussing cooperation on key projects, including a high-speed rail linking Kars in Turkey's east and Edirne in the west, for which an intergovernmental agreement was concluded at the Belt and Road Forum for International Cooperation, Professor Shi confirmed.

Professor Shi informed that China has the longest high-speed rail network in the world with 60 percent of the world's high-speed railway system, which is more than 200,000 kilometers long. He also underscored that his country was making efforts with other countries to promote the connectivity of the Asian, European and African continents through building a more developed transport sector and their adjacent seas under the Belt and Road Initiative and Turkey is a very important partner in achieving that goal, particularly to boost the Middle Corridor (See Map 2 for New Silk Road routes), where a successfully connected railway network will carry Chinese goods to Europe within two weeks. It has also been noted by Turkey's Minister of Transport, Maritime Affairs, and Communications previously in a number of occasions. To that end, Professor Shi pointed out that China has approximately 130 bilateral and regional agreements in the road and maritime transport with different countries, including Turkey.

In order to solve problems of financing mega infrastructure projects, China has developed different models to make the most of the private sector resources, and by increasing cost-efficiency of public projects. A build-operate-transfer model, which employs a comprehensive public-private-partnership and is also successfully implemented by Turkey in several mega projects, including the Çanakkale 1915 Bridge, Yavuz Sultan Selim Bridge and Eurasia Tunnel, are also significant for the Middle Corridor of Belt and Road. Likewise, it has been promoted by the Chinese government for providing financial resources for projects.

"Transport is the fundamental sector to achieve the vision of Belt and Road. The sector plays a significant role in that vision, so China attaches great importance to the development of transport," stated Baolin Shi at the session titled Governance of Gateways and Corridors.

However, he drew attention to the fact that achieving this vision did not require a single-state campaign, highlighting the fact that the "Belt and Road" has built an open and inclusive platform favoring connectivity and integration of all parties on three continents, Asia, Europe and Africa. Therefore, a multi-layered and international cooperation, as well as mutual understanding, were essential, both for the development of infrastructure initiatives that will strengthen the connectivity and benefit all parties included.

Shi highlighted that effective governance, which necessitates efficient regulatory frameworks and does not burden investors, policy-makers with bureaucracy, as another key point for the development of corridors on the "Belt and Road" initiative.

"There are two aspects for the success of the Belt and Road initiative. The first is to improve the hard link between transport routes through infrastructure projects. The second is the composition of the soft link through policy regulations," said Shi, "intergovernmental regulatory frameworks that set forth common standards for the developing and developed projects along the corridors on Belt and Road to straighten and streamline the technicalities."

An effective regulation will facilitate the operation of transport while improving infrastructural connectivity, he noted.

Speaking at the same session, Mathieu Grosch, the European Coordinator for the TEN-T Orient-East Med Corridor, which will connect Central Europe beginning in Hamburg with maritime interfaces of the North, Baltic, Black and Mediterranean seas down to Greece and Cyprus, explained the importance of efficient governance as essential in utilizing the corridors.

Elaborating on the corridor approach to transport, Grosch emphasized that this approach to connect countries and boost economic ties will be beneficial for all parties. "A good investment in Bulgaria and Romania can be and should be interesting for Germany for instance too event there is a big economic difference between the countries on the corridor," said Grosch.

Because it can be difficult sometimes to convince countries to make national investments and adopt cross-border thinking, the corridor approach must be emphasized for its added value for transnational cooperation, he thought.

According to Grosch, a good governance model of corridors combines a top-down and bottom-up approach. This combination means, he explains, common standards at every level of technicalities and information-sharing adopted through regulations. The cooperation with the regional and local governments is also essential. This method of governance, he reckons, writes the success story of what he calls the European Network.

The matter, however, is to devise regulations less burdensome on investors, easing the bureaucracy and red tape, as much as possible. Baolin Shi, Mathieu Grosch and Michael Christides, the Secretary-General of Black Sea Economic Cooperation, emphasized on the removal of unnecessary bureaucratic procedures for investors and countries that wish to be involved in these corridors while drawing up neat and facilitating regulations.

As a matter of fact, Turkey can also be instrumental in this network as Europe's gate to Asia. In December 2007, Chapter 21 on Trans-European networks was open for negotiations with Turkey. In January 2010, the Halkali-Kapikule-Ankara-Sivas-Kars Railway (linking Bulgarian and Georgian borders through Turkey) was defined as a priority project of European interest. In the context of the 2013 new TEN-T guidelines, Turkey is currently assessing the connection of some of the infrastructure with the EU network through railways.

Since the country is aware of its role to connect continents, its will to connect the railway network to that of Asian neighbors and toward China is clear. The two major rail projects are intended to connect Turkey and China. It has initiated major projects to rehabilitate some of the existing railways and build new ones such as Edirne-Kars high-speed railway and Baku-Tiflis-Kars Railway Project, which will be operational this summer.

The Marmaray Project, which became operational in 2013 on the 90th anniversary of the Republic is the first standard-gauge connection between Europe and Asia. It is a very crucial part of the TEN-T corridor and Middle Corridor of Belt and Road. This 76.3 km long project comprises 13.6 km of tunnel, 1.4 km long immersed tube under the Bosporus, 63-kilometer railway upgrade and 41 stations.

The project is expected to provide non-stop transport of goods via railway from Beijing to as far as London. The total length of the railway line will be 76.3 km when finished and 21 freight trains will operate every day in each direction. These trains will cross the Yavuz Sultan Selim Bridge or the Marmaray will continue on their way to Istanbul/Halkalı then to Bulgaria in Europe, where goods can travel without any customs restrictions according to the EU-Turkey Customs Union Agreement that came into force in 1996. It will be also updated soon as Turkey and EU will negotiate expanding the scope of this agreement on June 13.