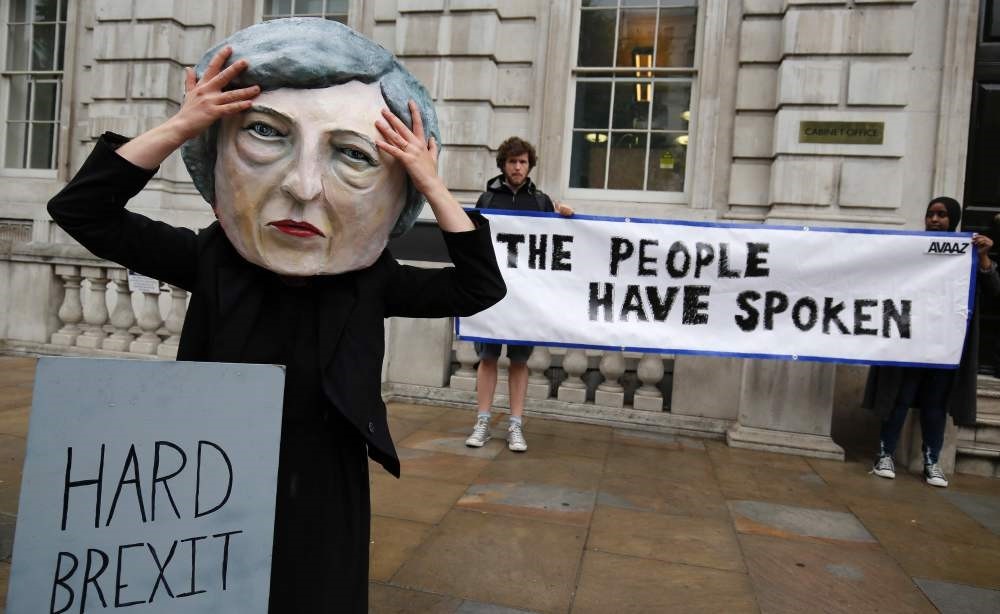 A demonstrator wears a mask depicting Britain's Prime Minister and leader of the Conservative Party Theresa May, and poses with a mock gravestone bearing the words ,Hard Brexit, RIP.,
by Jun 17, 2017 12:00 am

After a surprise election result last week, British PM May faces pressures from business circles, who hope that the election results will reprogram the government's approach to talks

Business leaders are calling on Prime Minister Theresa May to unilaterally guarantee the rights of millions of European Union (EU) nationals living in Britain and to honor its financial commitments as it prepares to start talks on its exit from the union.

After May suffered a shock loss of her parliamentary majority last week, businesses are becoming more vocal about how the government should handle the talks, hopeful their views will carry more weight than before the election.

Nicole Sykes, the head of EU negotiations at Confederation of British Industry (CBI), which represents the country's biggest companies, said the election result should lead to a "reset" in the way the government approaches the talks.

She said Britain should grant the 3 million EU nationals already living in Britain the right to remain, say there will be no return to border controls in Northern Ireland, and prioritize jobs and the economy.

"There is a lot to get done and the clock is ticking," she said. "Let's make sure we get the tone right." Britain is preparing for the start of the negotiations that are arguably its most important since World War Two and that will have the potential to define its relationship with its biggest trading partner for generations.

Businesses sense an opportunity to change the UK's negotiating stance after May signaled before the vote she favored a departure from the European customs union as well as the single market, and a focus on controlling immigration.

John McFarlane, who chairs lobby group TheCityUK as well as Barclays, favored the same concessions as the CBI and said Britain should offer to have joint regulatory oversight of EU-related financial activity in Britain and agree to resolve any legally binding financial commitments.

"Create the goodwill and certainty on things that are going to be done anyway," McFarlane told Reuters. "It creates a better environment for agreement on other things that they don't want."

Peter Hargreaves, the billionaire who founded stockbroker Hargreaves Landsdown and the biggest donor to the leave campaign, also backs guaranteeing the rights on EU nationals to remain working in Britain.

"There are lots of people who have come here, they work hard, they contribute to the economy, they have families here, why would you want to get rid of them?" he told Reuters. "We should just make the gesture and let the EU respond."

Ahead of the talks, EU negotiators also say that May should agree to pay Britain's bills to the European Union and drop threats to walk out without a legal deal.

Other finance executives in Britain who have interacted with the British and the European Union said, meanwhile, that Europe's officials were much better prepared and organized for the divorce talks.

The executives said EU officials were asking much more detailed, technical questions about the impact of Britain's departure that will give the bloc an advantage in the talks. "At the moment it's like putting a featherweight up against a heavyweight," one executive said.