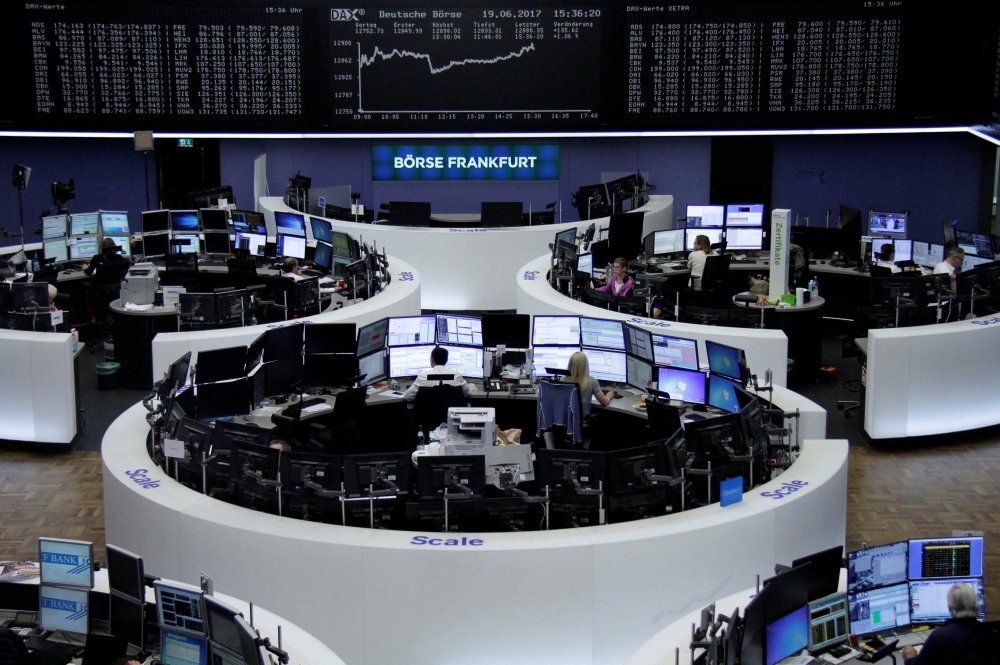 Traders work in front of the German share price index, DAX board, at the stock exchange in Frankfurt.
by reuters Jun 20, 2017 12:00 am

European stocks headed for their biggest rise in two months on Monday as investors snapped up cut-price retail and tech stocks and France's markets cheered a parliamentary majority for pro-business President Emmanuel Macron.

Risk was back in vogue and the Nasdaq was expected to regain 0.7 percent of the near 3.5 percent it has lost over the last couple of weeks as investors have top-sliced the likes of Apple, Amazon and Alphabet that have been on a tear all year.

Europe's banks also drove higher following broker upgrades for Credit Suisse, while there was little sign of tension for the sector or for the pound or euro as formal Brexit negotiations kicked off in Brussels.

"We expect the Macron reforms to transform France like the Thatcher reforms had cured the erstwhile sick man of Europe, the United Kingdom, some 35 years ago," said Berenberg European economist Holger Schmieding.

"And like the 'Agenda 2010' reforms had turned Germany from one of the weakest into one of the strongest economies in Europe almost 15 years ago."

Asia had kicked off the week strongly as well with a two-week closing high for Japan's Nikkei.

There were 1-1.2 percent jumps in China and Hong Kong too ahead of MSCI's annual review on Tuesday which expected to see it add mainland-listed Chinese stocks to its top share benchmarks for the first time.

Chinese data had also helped, with signs of easier liquidity conditions and home prices up 10.4 percent in May from a year ago, although slowing from April's 10.7 percent gain.

"A-shares could be included though at fairly limited weight," Asha Mehta, a portfolio manager at Acadian Asset Management, said of the MSCI review, which will be announced at around 2130 GMT.

"MSCI has expressed that while liquidity and now access is there, some regulatory requirements are not ideal for index inclusion."

Emerging markets went sailing higher with stocks enjoying their biggest daily gains in nearly four weeks though another day of weaker oil prices took a toll on Russia again, where the rouble was down another half a percent.

Europe's retailers continued to claw back some ground having been clobbered along with U.S. peers like Wal-Mart and Target on Friday by net-giant Amazon's $13.7 billion deal to buy upscale grocer Whole Foods Market.

It was Amazon's first major bricks and mortar acquisition in the sector and spooked traders on worries it could now be going hard after the sector's traditional.

In the currency markets, the differing messages of the world's major central banks on inflation and monetary policy prodded the dollar higher against the yen ahead of a series of appearances by U.S. Federal Reserve officials this week.

Fed chief Janet Yellen's confidence as her team raised interest rates for the third time in six months last week surprised investors who had expected more caution about the economy.

Sterling also nudged higher to just under $1.28 and 87.42 pence per euro as formal negotiations got underway on Britain's exit from the European Union, which are expected to generate plenty of headlines for the currency in the weeks ahead.

Brexit Secretary David Davis held negotiations in Brussels on Monday, which will be followed by a Brussels summit on Thursday and Friday where Prime Minister Theresa May will meet - but not negotiate with - fellow European Union leaders.

Davis's agreement to Monday's agenda led some EU officials to believe that May's government may at last be coming around to Brussels' view of how negotiations should be run. May's own political survival is in doubt after she lost her parliamentary majority in an election this month.

"We are starting this negotiation in a positive and constructive tone," Davis told reporters. His EU counterpart Michel Barnier's response was: "We must first tackle the uncertainties caused by Brexit."The euro was steady at $1.1195, retaining Friday's 0.5 percent gain. The dollar index, which tracks the greenback against a basket of six global peers, was also little changed at 97.182.

The market is awaiting comments by New York Fed President William Dudley, a close ally of Yellen's, when he speaks at a business roundtable in New York state.

"In the wake of Friday's weak U.S. data, Dudley could provide insight into whether the Fed is still poised to continue normalising monetary policy," said Masafumi Yamamoto, chief forex strategist at Mizuho Securities in Tokyo.

In commodities, oil futures lingered near six-week lows over concerns about a supply glut amid faltering demand.

Gold touched a 3-1/2-week low earlier in the session and was trading down slightly at $1,250 an ounce ahead of U.S. trading.