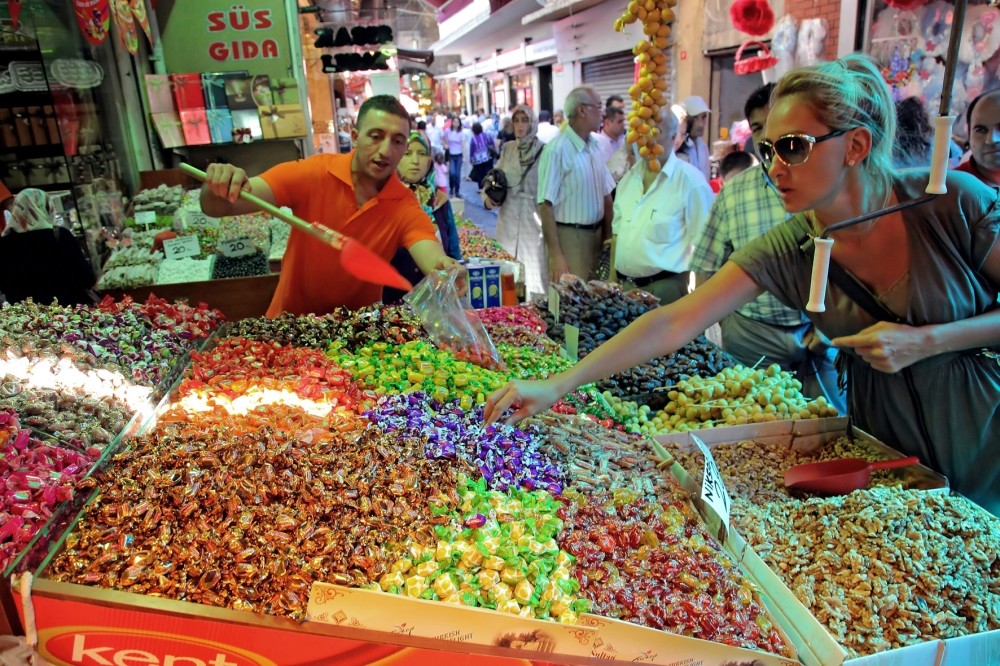 After 29 days of fasting, Muslims all around the world are preparing to celebrate the Ramadan holiday, also known as Eid al-Fitr. Ramadan traditions vary in Turkey according to regional traditions, while Turks prepare börek and baklava for visitors at home and children across the country become excited about wearing their special, new holiday attire and others prefer to vacation by the sea. Whether you spend the holiday with family in the city or on vacation in a warm place, the vivacity of Turkey's economy is reflected everywhere. Just a week before the holiday, mobility in the retail sector; including food, tourism and clothing sales, have already increased.

The Confederation of Turkish Tradesmen and Craftsmen (TESK) Chairman Bendevi Palandöken told Anadolu Agency (AA) that tradesmen and craftsmen operating in 317 different sectors, including confectioners, taxi drivers, tailors and hairdressers, are preparing for the Ramadan Holiday.

Stressing that the Ramadan holiday always brings mobility to the market and the turnover of local tradesmen also increases during such special holidays, Palandöken said: "These are the days that our tradesmen like the most. They make special preparations for all occasions, including Mother's Day, Father's Day and Valentine's Day, by making lists of goods they can sell in their stores that will catch the attention of customers," he explained.

Palandöken emphasized the need to exercise caution when buying products at open booths in local bazaars or from street vendors, as well as with those who illegally buy and sell goods as they undermine the hard work of honest tradesmen and threaten people's health with low-quality products.

According to Palandöken, nearly 50,000 tons of goods are sold in the confectionery sector, generating nearly TL 700 million ($198.85 million) in revenue during the Ramadan Holiday. Stressing the importance of avoiding unlabeled candies, chocolates, desserts and bakery products that are produced in unhealthy environments and sold under-the-counter by illegal sellers, Palandöken stated that people should be prudent and careful, focusing on their health more than their budgets.

Ulusoy pointed out that the Turkish Republic of Northern Cyprus (KKTC) and Balkan countries offering visa-free travel stand out among foreign tour destinations, while Greece, Spain, Italy and Central Europe offer tours that are also popular this year.

Şeref Fayat, chairman of the Turkish Clothing Manufacturers' Association (TGSD), stated that the spirit of the Ramadan Holiday is reflected in consumption habits, saying that shopping on this occasion is an indispensable habit, especially for families with children.

Pointing to the increase in the importance of ready-to-wear clothes during religious holidays, Fayat noted: "Total revenue in ready-to-wear clothing, which reaches nearly TL 6 billion ($1.71 billion) on a monthly basis, reaches nearly TL 8 billion ($2.28 billion) during religious holidays. While people in the Anatolian provinces spend more on their Sunday clothing, people living in big cities like Istanbul, Ankara and İzmir, prefer to shop during seasonal discount promotional periods or when banks offer special payment plans. Shopping for Sunday go-to-greet clothing on the internet has become one of the new habits of consumers in recent years."

Börek and baklava popularity on the rise

Mustafa Kahveci, chairman of the Ankara Chamber of Pastry Sellers, Confectioners and Candy Makers, said börek and baklava consumption increases during the Ramadan Holiday, stressing that this brings mobility to the pastry sector.

Noting that prices have remained static since last year, Kahveci said, "The price of one tray of baklava varies between TL 40 ($11)and TL 70 ($19.92), while 1 kilogram of it varies between TL 25 ($7.11) to TL 30 ($8.54)." Also, 1 kilogram of candy offered as a treat ranges between TL 25 ($7.11) and TL 70 ($19.92). Kahveci also advises buying products from familiar tradesmen in local neighborhoods which makes it easier to report complaints if necessary. "People should also be careful about the expiration dates by checking the labels on the products they buy.