Turkey's inflation falls by 0.27 percent in June, annual inflation at 4-month-low with 10.9 percent 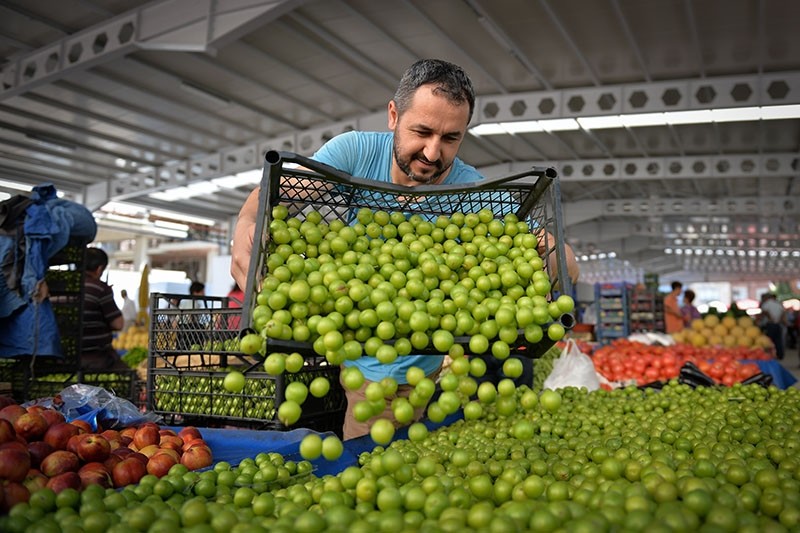 As food prices decreased in June, especially for fruits and vegetables, the consumer price index (CPI) fell monthly by 0.27 percent, above market market expectations, bringing the annual inflation in Turkey to four-month-low level at 10.9 percent, according to the data released by the Turkish Statistical Institute (TÜİK) Monday.

The inflation data in June is also being used to determine mid-year raise rate for millions of Social Security Institution (SGK) pensioners. Accordingly, the pensions will receive a raise of 6.89 percent.

The CPI rose by 5.89 percent compared to December of the previous year and 9.36 percent on twelve months moving averages basis. The inflation rate also retreated from 11.72 percent in May.

The new data was in parallel with recent Turkish Central Bank expectations which were released upon the institution's latest Monetary Policy Committee Meeting in June.

The Turkish Central Bank had expected a decline in the inflation rate after June, as it said food prices decreased after curbing measures taken by the government.

The highest monthly increase was in education category with 1.05 percent, followed by hotels, cafes and restaurants with 1.03 percent, miscellaneous goods and services with 0.52 percent, furnishing and household equipment with 0.48 percent and housing with 0.31 percent.

The highest monthly decrease was in the clothing and footwear category, followed by food and non-alcoholic beverages with 1.06 percent, transportation with 0.84 percent, communication with 0.39 percent and recreation and culture with 0.14 percent.

Commenting on the inflation rate, Enver Erkan, analyst at KapitalFX, said the fundamental factor in the data was the decline in food and non-alcoholic beverages prices.

"Most of that came from seasonal effects; we see the effects of measurements taken by the Food Committee in the upcoming months. The food supply will be supported by imports in the short term, in order to control the prices," Erkan explained.

Erkan also said domestic food production had been affected positively, thanks to good weather conditions, including plenty of rain, in May and June.

He also stated the adverse effect of foreign exchange rates had also been abolished as core inflation slipped to 9.20 percent.

"The fall of the consumer price index will continue in July. After the summer, inflation will rise again to higher levels," Erkan added.

He said the change in exchange rates would be decisive for the year-end inflation rate which he expected to reach a single digit.

Vahap Taştan, research specialist at Alnus Yatırım, said the inflation rate saw its lowest level since February after a peak in April of 11.87 percent.

The inflation rate may see another peak in August and September; however, it will not be as high as the April level, he noted.

"We expect that the rate will continue to decrease gradually in the last quarter of the year," he added.

Taştan stated that policymakers do not only have to intervene on food prices but also in tourism-sector prices -- which saw a second highest monthly increase in June. He recommended policymakers set up a tourism committee, similar to the Food Committee.

Hilmi Yavaş, an economist at Şeker Invest, said the inflation rate was far below market expectations.

"This is driven by a decrease in food and energy prices. Core inflation is weak on the back of core goods. It seems that the increase rate of core services has also slowed down," he added.