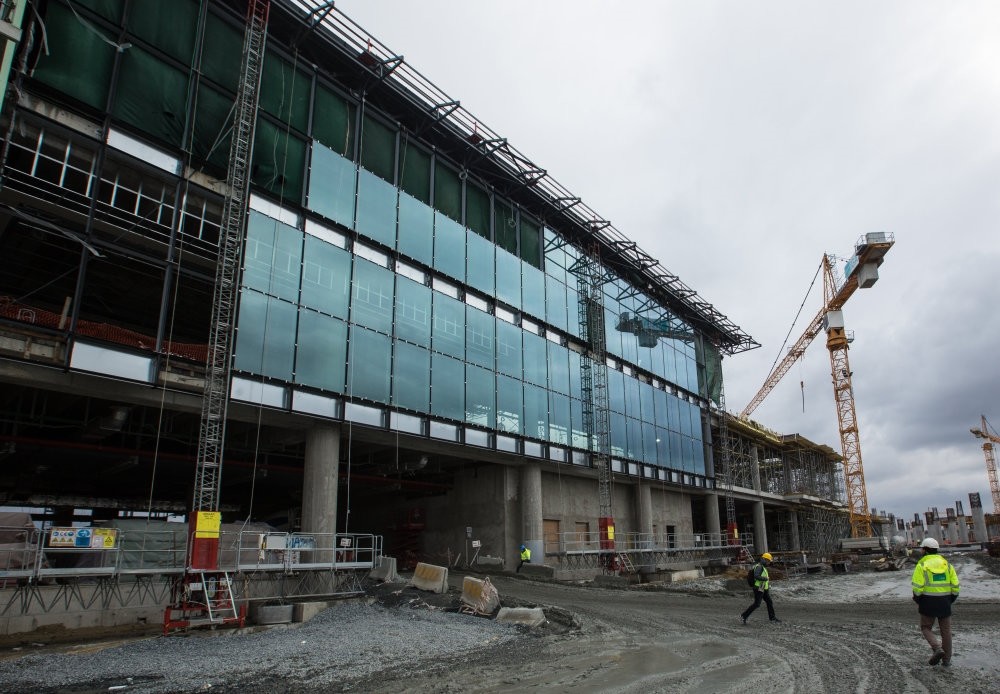 Among the numerous facilities that could potentially turn the Istanbul New Airport into a busy hub for business are logistics-based facilities, convention centers, retail stores and hotels. The first phase of completion of the new airport is slated for the last quarter of 2018 and is expected to include a Free Trade Zone (FTZ) that will complement business and commercial trade-based activities at the airport, having a far-reaching impact on trade volume in the Turkish economy. In an exclusive interview with Daily Sabah, İGA Airport Construction CEO Yusuf Akçayoğlu spoke about the location of the FTZ, which will be established at the Istanbul New Airport amid aims to further expand Turkey's exports through convenient bureaucratic measures that will ease the process for exporters and remove red tape.

Discussing the potential contributions that the Istanbul New Airport will have on Turkish exports and national trade while emphasizing measures to build the modern Silk Road of aviation to potentially contribute 4.7 percent to Turkey's gross domestic product (GDP) rate, CEO Akçayoğlu noted that a FTZ within the airport will be established and will further bolster export volume. He noted, "Currently, we are in the process of talks with the Ministry of Economy for the foundation of a [FTZ] at the airport."

The zone will be a significant link in the chain of business operations of the airport, catering to the increasing need for a more efficient, business-friendly trade environment with less bureaucratic red tape, while providing a value added tax (VAT) exemption, customs duties exemption, corporate tax exemption and no currency restrictions. Moreover, considering the fact that the Istanbul New Airport is expected to serve 90 million passengers annually upon completion of the first phase of construction, and 200 million upon completion of the entire airport facility to host over 100 airliners and numerous shipping operations, the FTZ will mobilize Turkey's goals to become an important rivet of the One Belt and One Road (OBOR) initiative launched by Chinese President Xi Jinping in 2013 amid efforts to revive economic activity along the new Silk Road, potentially reaching nearly 65 percent of the entire global population.

According to the Ministry of Economy, FTZ areas are defined as those that offer special regulations for operating users in order to boost export volume of goods and services. These zones constitute a flexible and convenient business environment and aim to accelerate foreign direct investments (FDI), compelling businesses to engage in exports and promoting and developing global trade. Ministry data has revealed that there are currently 19 free trade zones in Turkey, one of which began operations at Istanbul's Atatürk Airport in 1990. In these zones, activities including research and development (R&D), manufacturing, banking and insurance, storing, and trading are conducted.

Many of the world's leading free trade zones are located on airport premises, facilitating global transportation for the movement of goods and services with high added value. Namely, the FTZ at Istanbul's Atatürk Airport operates to allow companies around the world to transport goods via relaxed bureaucratic methods and procedures, benefiting from corporate tax exemptions and VAT and the free transfer of profits. All these opportunities make free trade zones located on airport premises attractive business centers with cost-effective expenses and well developed, state-of-the-art infrastructure.

One of the best examples of airport-based free trade zones is the Dubai Airport Free Zone Authority (DAFZA), which as a single entity, contributed 4.7 percent to Dubai's GDP in 2015, aiming to further increase this rate in line with the strategic vision of 2017-2021.

Launched in 1996, DAFZA was the city's first attempt at transforming itself into an investment-driven economy and is home to over 1,600 companies from across the globe. Just like the Atatürk Airport Free Zone, DAFZA offers 100 percent tax and duty exemption. According to the DAFZA Authority, the state-of-the-art infrastructure, world-class facilities and red-tape-free processing have made it a favorite among expat investors.

The free trade zone also signed a strategic Memorandum of Understanding (MoU) to make it the headquarters of the International Center of the Islamic Economy. The MoU aims to strengthen mutual cooperation in support of the global Islamic economy. The success of DAFZA has been largely attributed to its geographical location and its proximity to European, Middle Eastern and African markets. Yet, considering Istanbul's strategic location; hosting 66 percent of all world's air traffic and accommodating 41 countries and 78 cities (excluding Turkish cities) within a three-hour radius of the city, 53 countries and 118 cities within a four-hour flight radius and 66 countries and 143 cities in a five-hour flight radius to Europe, Asia, Africa and Middle East, the city has a high rate of connectivity. These features will also apply to the Istanbul New Airport, which will be the world's largest airport covering an area of 76.5 million square kilometers. The airport's FTZ will bring potential business people in the Istanbul New Airport Free Trade Zone, providing them with a great opportunity to conduct operations easily and without procedural red-tape, offering tax exemptions and proximity to vast and lucrative markets.

According to data compiled by the Ministry of Economy, the trade volume of the Atatürk Airport Free Trade Zone was registered at $7.8 billion during 2012-2016, which remains far below its potential. However, the aim is to unleash that potential through government incentives, red-tape-free trade procedures, state-of-the-art infrastructure and world-class facilities at the Istanbul New Airport.

Sustainability has become one of the most emphasized topics for the energy and resource supply of the airport since the initial days of planning began. Chairman of the Airport Sustainability Committee, Yusuf Akçayoğlu, emphasized that given the fact that it will serve approximately 200 million and accommodate 350 aircraft at the same time, operations at the airport will require a tremendous amount of energy, but the administration has developed ways to construct an environmentally friendly airport.

One of the ways that the airport will lessen the amount of carbon emissions is by providing fuel for the aircraft via a fuel hydrant system instead of tankers, which leave carbon emission footprints, according to Akçayoğlu who added that "The fuel hydrant system will also alleviate traffic congestion in one of the busiest airports in the world." Upon completion, the system will be capable of simultaneously supplying jet fuel to 78 passenger-boarding bridges and 125 remote apron park positions with 538 hydrant pits at the Istanbul New Airport, according to information provided by the engineering company that is constructing the airport's hydrant system.

In addition to the fuel hydrant system, the energy-saving quality of façade windows will be another noteworthy feature in terms of energy efficiency at the airport.

"Façade windows have high visible transmittance and low thermal transmittance, meaning they will contain the heat. Compared to other conventional buildings, we will heat and cool the buildings using less energy," the İGA Airport Construction CEO noted.

The İGA's water consumption policy aims for the efficient use of the water that is required for the construction of the Istanbul New Airport. Furthermore, a large number of investments have been made in the water treatment systems to recover and safely return water to the environment from deposits in the project area that would otherwise be exposed in the sea. Instead of expelling waste water into the sea, the airport administration will treat and recycle the water to be used on airport premises, Akçayoğlu said.

These water treatment systems ensure compliance with potable water standards and generate enough water supply to meet the social needs of 25,000 people. In addition, industrial wastewater from concrete plants and water used in soil washing and sieving will be recovered to minimize water consumption. The airport's sustainable energy and environment activities include a biodiversity action plan, sustainable waste management, environmental and social impact management, green procurement and supply policies, and certification in Leadership in Energy and Environmental Design (LEED), which is necessary if the airport is to operate as a certified green airport, a reforestation goal of 5,000 hectares and goals to minimize operational carbon emissions.