A year after July 15: Coup attempt did not hinder Turkey's mega projects, launch of new ones 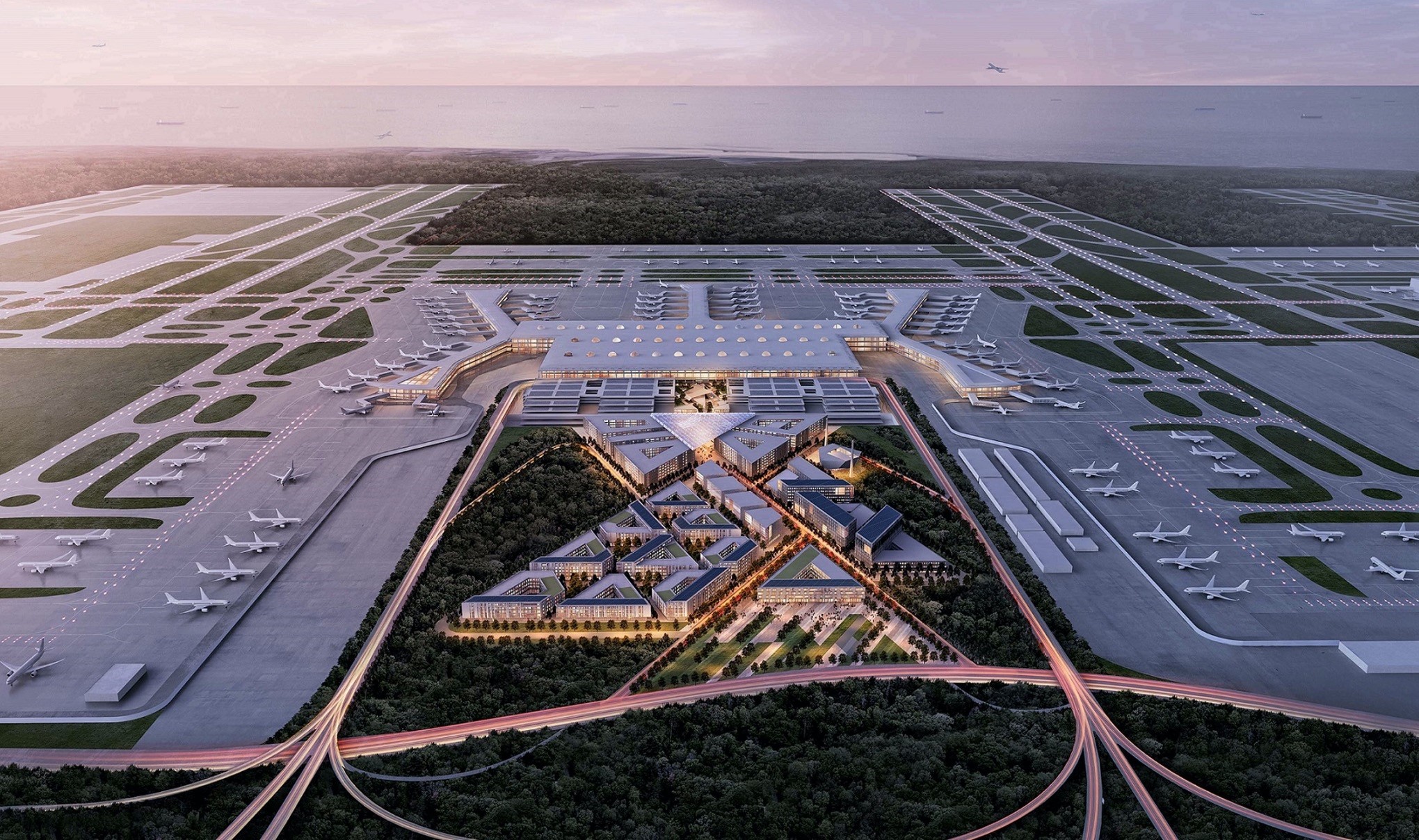 Istanbul New Airport is one of Turkeyu2019s largest construction project ever with investments of approximately 40 billion euros, planned to go operational in 2018.
by Daily Sabah Jul 14, 2017 12:00 am

Turkey managed to continue its ongoing mega projects and launched new ones without interruption, refusing to succumb to the possible economic repercussions of the failed coup attempt of July 15

A year on from the July 15 coup attempt by the Gülenist Terror Group (FETÖ), which the democracy, the constitutional order, the country's stability and all its institutional structures, including the economy, which has enjoyed stable development over the last 14 years, Turkey has eliminated the economic repercussions of the coup attempt, resulting in a 1.8 percent GDP contraction in the third quarter of 2016. In addition to 5 percent growth in the first quarter, Turkey has managed to deliver a number of mega projects and launched new infrastructure, aerospace, transportation and energy projects.

On the morning of July 16, about 17,000 employees at Istanbul's third airport reported to their jobs like any other day, the largest project in the history of the Republic of Turkey not stopping even then, according to administrators from IGA Airport Construction who spoke to Daily Sabah. "The fact that 17,000 employees did not stop working even for a moment made history as the harshest response to coup plotters ever seen in Turkey," administrative officials said. IGA Airport Construction administrators said that the coup attempt on July 15, 2016, did not disrupt the ongoing construction of the airport, which is being built with the goal to ensure that Istanbul is remembered for its cultural prosperity and commercial potential, not simply for the country's many coups.

Standing against the attacks that targeted national unity and economic development, Turkey stood steadfast as a single body, according to airport officials.

"Istanbul's third airport never wavered in providing non-stop support for construction, announcing that construction would continue resolutely to ensure that these tyrannical attacks would not affect the economic stability of the country," administrative officials said.

IGA said that even more than infrastructural developments in the country, the only way to overcome any obstacle is strong national will and unity, adding that the new airport is one of the most important locomotives for development, being constructed at full speed to be put into service.

Described as the largest project in the history of the Republic of Turkey, Istanbul's third airport is preparing to start operations in late 2018. Nearing 55 percent completion, the airport is expected to have received around 40 billion euros in investments by the time it is fully operational.

The new airport will provide flights to more than 350 destinations around the world, making it one of the biggest transport hubs in the world. The airport will also serve nearly 100 airlines. Once all phases of construction are completed, the daily take-off/landing average will likely be around 3,500 with a capacity for 347 narrow-body and 266 wide-body planes on its six runways and 143 boarding bridges

This will, in turn, contribute to the economy to a considerable extent. The new airport is expected to provide employment for 225,000 people by 2025, as an economic impact analysis report prepared by the Center for Economic and Foreign Policy Studies says.

Furthermore, an additional household income will be created of around $3.8 billion to $4.4 billion, while its contribution to the national economy will reach up to 4.2 percent to 4.9 percent of national income.

Professor Kerem Alkin told Daily Sabah that the structural performance of the economy, as well as its macro-dynamism, are attributable to the solid foundation built as a result of the profound reforms launched over the last 15 years. Despite experiencing a nationwide shock with last year's coup attempt, Alkin drew attention to the fact that on the morning of July 18, Turkey opened all of its markets.

"Turkey accomplished the mega-scale projects it had been constructing with determined resolution. The realization of mega-scale projects that will occupy important positions among the dynamics of the Asian-Pacific and the Atlantic in the coming year has gained global recognition," Alkin said. "The success and global recognition of these mega projects have proven the sustained interest of foreign investors in Turkey despite attempts by the U.S.-based credit rating agencies to downgrade Turkey's credit rating."

The resolution and confidence, Alkin said, resulted in the successful delivery of mega projects and allowed Turkey to secure its place among the best-performing countries in the Organization for Economic Cooperation and Development (OECD) and the G20. He said that Turkey will continue to accomplish mega-scale projects that address global needs not only in regards to transportation and infrastructure but also in terms of aerospace technology, energy, defense and logistics, particularly in the context of opportunities provided by the presidential system of governance that was approved with the April 16 constitutional referendum. 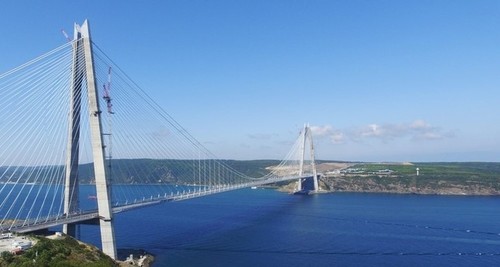 One-and-a-half months after the failed coup attempt last year, on Aug. 26, 2016, the Turkish government put the Yavuz Sultan Selim Bridge into service as part of the Northern Marmara Motorway. The bridge, the broadest suspension bridge in the world, has 10 lanes and cost $3.5 billion. It is also has the highest towers for a suspension bridge in the world, with the world's highest tower reaching a height of 322 meters.

More than 6,500 workers and engineers worked on its construction, spanning 2,164 meters. Stretching 1,408 meters over the Bosporus, the bridge has eight highway lanes, two railways and is the longest suspension bridge in the world with a rail system. The height of the tower in the village of Garipçe on the European side is 322 meters and the tower in the Poyrazköy district on the Asian side is 318 meters high. The bridge has the highest abutments in the world.

The rail system on the bridge runs from Edirne to İzmit and will be integrated with the Marmaray and Istanbul metro lines, connecting to Istanbul's Atatürk International Airport, Sabiha Gökçen International Airport and the third airport, which is still under construction.

Connecting the central Anatolian region to the western Black Sea region and the Black Sea to the Mediterranean, the July 15 Independence Tunnel opened in late December and it constitutes an important point along the north-south corridor.

Stretching hundreds of meters underground, the tunnel has reduced the difficulty of commuting and traveling around the 875-meter high Ilgaz Mountain, which was a major obstacle for drivers. Consisting of two tubes, one measuring 5,370 meters and the other 5,391 meters, the entrances and exits of the tunnel are in the shape of a shark's mouth. The Ilgaz Tunnel is expected to total cut travel times by 345,655 hours per annum and save 8.3 million liters of fuel annually. The tunnel is estimated to contribute approximately TL 40 million ($12 million) to the economy.

The name of the tunnel, the Ilgaz July 15 Independence Tunnel, was chosen to honor the night of the failed coup attempt on July 15. While driving from Istanbul to Ankara on the night of the coup attempt, Prime Minister Binali Yıldırım chose another route and stayed in Ilgaz for a while. The prime minister waited for a while at the construction site of the tunnel and used the site as a temporary shelter and headquarters. Constantly receiving information from Ankara, Yıldırım ordered the downing of planes engaged in the coup attempt and the bombing of the Akıncı Air Base while waiting at the tunnel construction site. He was later driven to Kastamonu, a city in the western Black Sea region where İnebolu Port is located. 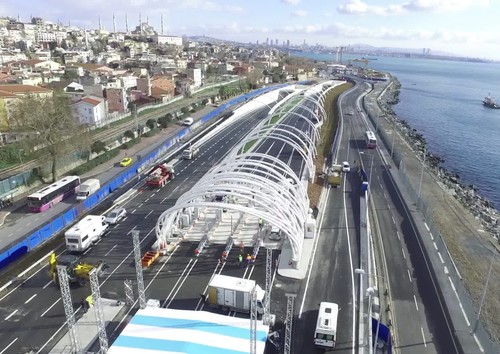 Connecting Asia and Europe underneath the bed of the Marmara Se, the Eurasia Tunnel was completed with a $1.3 billion investment and opened for service in late December.

The 5.4-kilometer section of the 14.5-kilometer route was placed under the seabed in two levels. Located 106.5 meters under the surface, the tunnel will ease traffic congestion and allow roughly 120,000 vehicles to pass through daily. It is estimated to generate business volume of TL 1.5 million for the economy and save 52 million accumulative hours of time in traffic. The time-saving potential is one of the great features the tunnel provides.

The amount of vehicular emissions of carbon monoxide, carbon dioxide, nitrogen oxides and particulate matter released will be reduced by approximately 82,000 tons per year as a result of the tunnel. Sixty subcontractors are working on the project, which also employs 800 people a day.

Slated to be operational by September, the Baku-Tbilisi-Kars (BTK) Railway, with a price tag of $450 million, has emerged as a critical project in this part of the world, with Turkey at the westernmost point of the east-west corridor.

The railway measures 826 kilometers, 76 kilometers of which will pass through Turkey. From the port in Baku, the route will reach the Aktau Port in Kazakhstan via the Caspian Sea and continue until it reaches China. Additionally, Turkmenbashi Port in Turkmenistan is included in planned future routes. The BTK Railway is expected to carry 1 million passengers and 6 million tons of freight annually.

As of 2034, according to projections, the BTK Railway is expected to carry 3 million passengers and 17 million tons of cargo. Thus, easier, less expensive transportation options will strengthen person-to-person contacts, contribute to developments to increase the socioeconomic dynamics of the region with transit fees and tourism, promote the mobility of goods and people and integrate the region with the international community and global markets. By doing so, sustainable and permanent ties will be established in Eurasia.

On the 102nd anniversary of the 1915 victory in the Battle of Gallipoli, the foundation-laying ceremony for the Çanakkale 1915 Bridge, which the government considers one of the important milestones for its 2023 vision, was laid.

On Jan. 26, a consortium of Turkish and South Korean companies – Daelim, SK E&C and Limak and Yapı Merkezi OGG – won the contract to construct the bridge with a 192-month lease.

Set to be built between Lapseki's Şekerkaya region on the Asian side and Gallipoli's Sütlüce region in Europe, the project, which will be completed with an investment of over TL 10 billion, will be the first for the Dardanelles and the fifth suspension bridge in the Marmara region.

The bridge will be the longest suspension bridge in the world, with a central span of 2,023 meters in accordance with the centenary of the Republic. It will be 32 meters longer than the world's longest bridge – the Akashi-Kaikyo Bridge between Kobe and the Awaji Island in Japan. The Çanakkale 1915 Bridge is expected to be fully operational in 2023, the centennial of the foundation of the Republic of Turkey.

Moreover, the Karapınar Renewable Energy Resource Area (YEKA), where the largest solar energy power plant in Turkey will be established, will be built by a South Korean-Turkish consortium. The 1,000-megawatt power plant is expected to exceed costs of $1.3 billionOne-hundred permanent technical personnel will be employed in the research and development center that will be established at the plant. Electricity generation at the plant will start within 36 months after the equipment production plant is established.