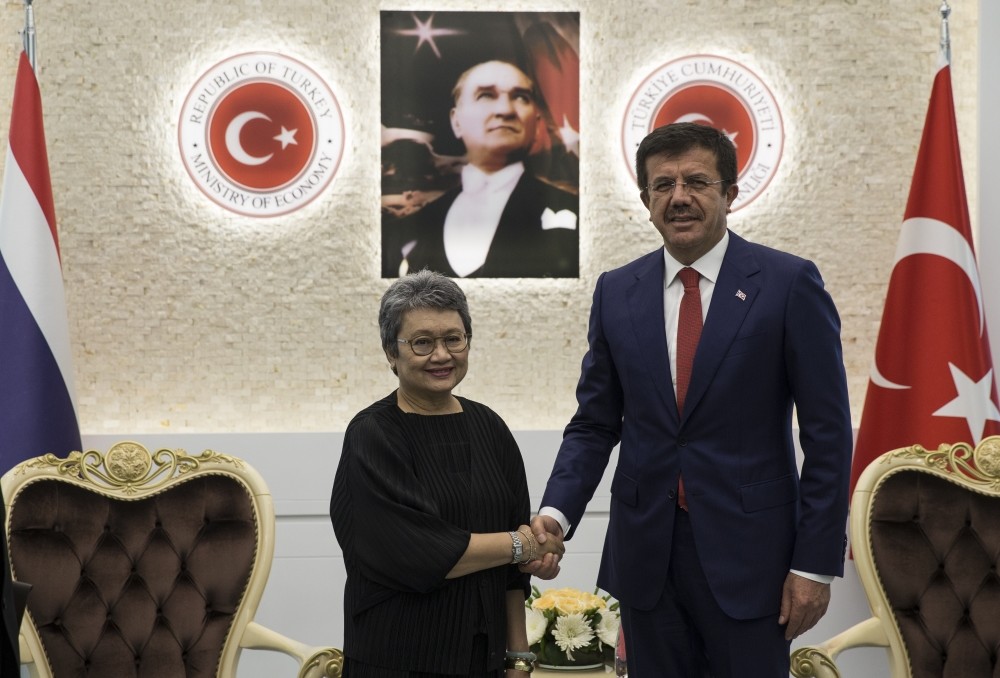 Economy Minister Nihat Zeybekci (right), together with Thai Trade Minister Apiradi Tantraporn (left), at a press conference at the start of free trade agreement negotiations between the two countries.
by Anadolu Agency Jul 20, 2017 12:00 am

Turkey and Thailand, in the presence of Economy Minister Nihat Zeybekci and Thai Commerce Minister Apiradi Tantraporn, yesterday signed a declaration in Ankara to start negotiations for a free trade agreement.

Speaking at the signing ceremony, Zeybekci underscored that the agreement with Thailand will increase bilateral trade between the two countries by 40 percent.

He said that the first phase of the agreement negotiations would only cover goods trade and will gradually be expanded to cover other sectors.

"The first stage of the agreement will cover merchandise trade while investments, services and electronic commerce will be incorporated in the free trade agreement in the next stage," he said.

Stating that Turkey, besides the European Union and customs union, has signed free trade agreements or preferential trade agreements with a number of countries in the region, Zeybekci said, "We aim to move this perspective toward Asian and far east Asian countries."

He pointed out that similar free trade agreements with South Korea and Malaysia have already come into force and an agreement with Singapore was waiting for approval. In addition, negotiations with Japan, Indonesia, and Vietnam were also in progress, he confirmed. Mentioning the possible effects of the free trade agreement, Zeybekci said, "According to our impact analysis, exports between both countries will rise by 40 percent."

He added that the two ministers have set a joint target to double the trade volume between the countries within three years of the free trade agreement coming into force.

Pointing out that there was a one-to-nine trade deficit against Turkey in its mutual trade with Thailand, Zeybekci said that this was not sustainable and emphasized on striking a balance.

Turkey's exports to Thailand were valued at $164 million while its imports from the country stood at $1.5 billion in 2016, according to the Turkish Statistical Institute (TurkStat). Zeybekci said the agreement will make Thailand an important trade partner for Turkey.

He confirmed that the first round of the negotiations, starting after the signing, will continue for two days.

Meanwhile, Thai Commerce Minister Apiradi Tantraporn said a comprehensive free trade agreement will boost economic growth and create employment opportunities. "We will first emphasize on trading goods where nontariff and tariff barriers will be reduced, to facilitate trade and investment between the two countries," Tantraporn said, and added that a twofold increase in trade volume, proposed in the agreement, was not a difficult target to achieve.