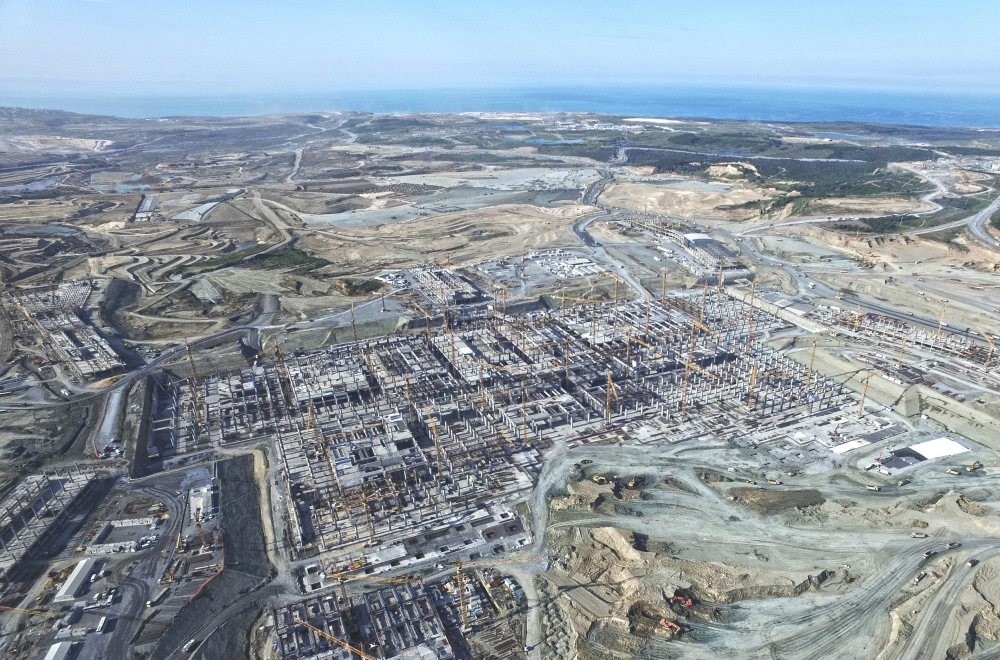 As work on Istanbul New Airport, which is expected to be opened on Oct. 29, 2018, continues at full speed, the number of workers has reached 30,000, while 57 percent of the project is complete

The number of employees working on the construction of Istanbul new airport reached 30,000, while 57 percent of the project, planned to open on October 29, 2018, is complete, Transport, Maritime Affairs and Communications Minister Ahmet Arslan said yesterday.

Arslan said that they aim to reach 35,000 employees in a short period, adding that they estimate the number of direct and indirect employment to rise to 225,000 once the airport is completed.

Speaking to Anadolu Agency (AA) about the airport's construction, Arslan said the target of 30,000 employees set for the summer months during which construction is the most intense, has been reached, stressing that Envision certificate, one of the most important references in terms of sustainability, was applied and the registration process was completed.

"With the said certificate, Istanbul new airport will be the first infrastructure project to receive the reference outside North America," he said.

Noting that the target of 30,000 employees set in the beginning of 2017 has been exceeded, Arslan said the target was to increase the number of employees to 30,000 during summer months.

"I would like to say with great pleasure that we reached this goal in July. Despite intense summer rain, the current work is continuing with increasing momentum," he said. "The next target is to increase the number of employees to 35,000. When the airport is complete, we estimate that the number of direct and indirect employment will increase to 225,000."

Arslan said that they applied for the Envision Sustainability Certificate of the Institute for Sustainable Infrastructure, which assesses the environmental, social and economic impacts of infrastructure projects.

"We expect Istanbul new airport to be the first airport to receive the world-renowned prestigious certificate outside North America and to be the largest infrastructure project in the world," he said.

Arslan informed that while the terminal building's steel roof has been completed to a large extent, the terminal's main block's façade and roofing have also begun, adding that the construction of the luggage system has been conducted by 65 percent, while the installation of the 28 passenger bridges has kicked off.

Explaining that more than 300 elevators, escalators and moving band equipment were brought to the site and assembled and the rough construction work of the air traffic control tower were completed, Arslan said: "The tower is a candidate to be one of the most important landmarks representing Istanbul. In addition, 3,750-meter-long and 60-meter-wide first runway as well as the asphalt coating work of the access roads at the airport construction have come to an end."

He also added that the ground-work operations of the 4,100-meter-long and 60-meter-wide second runway and access roads, which will be commissioned at the opening of the airport, are ongoing, while the subbase works at some parts have begun and the concrete coating work at the big apron in front of the terminal are currently in progress.

Earlier this month, Prime Minister Binali Yıldırım said that the opening of Istanbul New Airport is scheduled for Oct. 29, 2018.

"Even at the first stage this is going to be the largest airport in the world. Therefore, with the opening of this airport [Turkey] will become the meeting point for Africa, Europe, the Middle East and Asia and will become the center of aviation," the prime minister said, adding that the new airport would bring a new dimension to regional and global economy.

"In 25 years [Turkey] will get 26.5 million euros ($30 million) [of revenues from the airport]. After 25 years, the world's biggest airport would be a bonus. Nowhere in the world there is business of this kind," Yıldırım said.

Additional $79 billion to the Turkish economy

Transport, Maritime and Communications Minister Ahmet Arslan previously told that the Istanbul New Airport currently under construction in Istanbul will contribute greatly to the Turkish economy and to employment rates, noting that it will make very serious contributions to trade and is expected to generate 4.9 percent to the gross domestic product (GDP), an additional $79 billion obtained just from the airport.

Minister Arslan said that Turkey's aviation sector has made great advances due to the emphasis placed on aviation by the Justice and Development Party (AK Party), asserting that the liberalization of the sector allowed it to expand, pointing to President Recep Tayyip Erdoğan and Prime Minister Binali Yıldırım's instructions to make airlines the way of the people.

When the first phase of Istanbul's new airport is completed, it will have a capacity for 90 million passengers. Taking into consideration the fact that per capita expenditure in tourism the sector exceeds $700, the share of the expenditures by these passengers is expected to be above $7 billion, even if 10 percent of them visit Turkey as tourists.