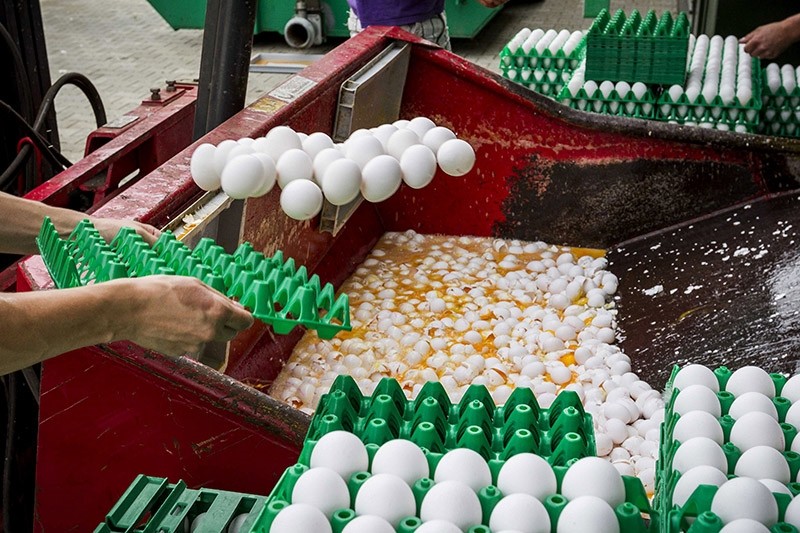 Eggs being destroyed at a poultry farm in Onstwedde, the Netherlands, 03 August 2017. (EPA Photo)
by Compiled from Wire Services Aug 04, 2017 12:00 am
A major German supermarket chain said on Friday it was removing eggs from sale nationwide, following a scandal over eggs contaminated with an insecticide banned from use in the production of food for human consumption.

Aldi - which in Germany operates as two separate groups, Aldi Nord and Aldi Sued - said in a statement that removing the eggs was a "pure precaution" to provide the consumer with "clarity and transparency," though there was no evidence of actual contamination in their produce.

Twelve out of Germany's 16 states have been affected by the scandal, which became public earlier this week when eggs from Dutch farms were found to contain high levels of Fipronil.

After shuttering 180 businesses earlier in the week, the Dutch food authority (NVWA) said following tests that 138 poultry farms -- about a fifth of all such concerns in the country -- would remain closed, with one batch of eggs posing "an acute danger to public health".

Eggs from another 59 farms contained high enough levels of the insecticide, fipronil, that the food authority warned they should not be eaten by children.

"Those businesses whose egg codes have been printed on the website will remain closed," the NVWA said, publishing a list of 138 codes printed on the sides of the eggs, which identify which farm they have come from.

According to Dutch media, some 10 billion eggs were produced in the country last year by about 1,000 poultry farms, with many of them going across the border into Germany.

The German agricultural ministry said "at least three million contaminated eggs" had been delivered from the Netherlands to Germany in recent weeks, most of which had been sold.

"Germany has been worse affected" than initially thought, admitted German Agriculture Minister Christian Schmidt after holding a "crisis teleconference" Thursday with his counterparts in German states.

Manufactured by Germany's BASF among other companies, fipronil is commonly used in veterinary products to get rid of fleas, lice and ticks.

But it is banned from being used to treat animals destined for human consumption, such as chickens.

The European Commission said it had been made aware of the egg issue, and spokeswoman Anna-Kaisa Itkonen told reporters developments were being monitored "very closely".

"What I can say is that the farms are identified, the eggs are blocked, the contaminated eggs are traced and withdrawn from the market, and the situation is under control."

It is believed the toxic substance was introduced to poultry farms by a Dutch business, named Chickfriend, brought in to treat red lice, a nasty parasite in chickens. Dutch and Belgian media reports that the substance containing the insecticide was supplied to Chickfriend by a Belgian firm have not been confirmed.

German officials are also investigating reports that the contaminated product had been delivered directly to German poultry farms in the Lower Saxony region, which then sold their eggs in other parts of the country.

The biggest supermarket chain in The Netherlands, Albert Heijn, said meanwhile it was pulling 14 types of eggs from its shelves.

"All the eggs of these 14 kinds have been sent back to the depot and destroyed," company spokeswoman Els van Dijk told AFP.

Tests have found fipronil in some eggs but not in quantities that pose a threat to human health. None of the eggs have made it to Belgian supermarket shelves, the Belgian authority said.

With losses expected to run into millions of euros, it is another blow for Dutch poultry farmers after 190,000 ducks were culled in November amid a highly infectious strain of bird flu.