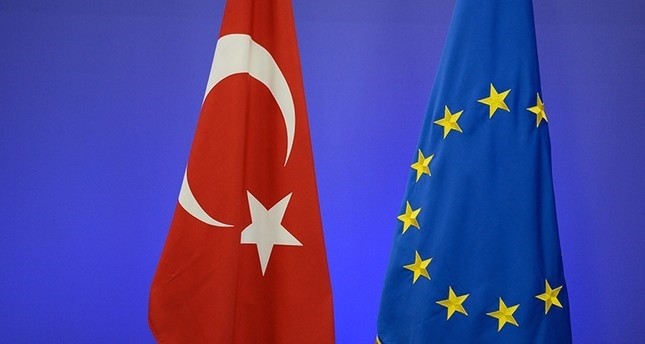 As the only non-EU member country that has a customs union agreement with the EU since 1996, Turkey has been proven a strong trade partner to the union.
by daily sabah
Aug 18, 2017 12:00 am

Turkish authorities have criticized German Chancellor Merkel's remarks on not expanding the EU customs union deal with Turkey, in what they call Germany's monopoly over EU institutions

On Wednesday, in an interview with young video bloggers ahead of the elections in Germany next month, Merkel signaled that the EU would not enter into talks with Ankara on modernizing an existing customs union due to recent political tensions. "But in any case, for the time being, we would not carry out talks with Turkey on improving or enhancing the customs union," the German chancellor said. However, Çelik warned against allowing a bilateral dispute to become a wider problem. "EU resolutions are determined by principles," Çelik added. The minister also warned against individual European leaders making decisions "against the basic mechanisms of the EU."

The EU minister emphatically stated that Merkel's comments are driven by the recent political row between Turkey and Germany. "EU institutions should prevent Germany's stance to transform this topic into an EU-level issue," he said.

Pointing out that the impact analysis of the bloc propelled them to initially make a modernization offer to Turkey, Çelik noted that the update should be evaluated on a win-win basis with due consideration given to the expansion of free trade.

"Germany tries to turn the modernization of the deal into a favor for Turkey. I would like to highlight that Turkey has no one-sided ambitions for the update of the customs deal," he noted.

"For an EU member state to take an instructing tone against EU institutions is not acceptable," the spokesman said while noting that the Customs Union is devised on a win-win basis. If this approach is attacked, both Germany and Turkey will be exposed to economic losses.

Merkel's remarks came after opposition parties increased pressure on the German government, seeking a harsher tone against Turkey, particularly due to the recent arrests in Turkey of around 10 German citizens, including a reporter and a human rights activist, for allegedly supporting terrorist organizations.

The German chancellor, who long favored dialogue with Turkey to resolve political differences between the two countries, repeated on Wednesday that it is important to keep communication channels open.

She also renewed her call for the release of German citizens who were arrested in Turkey as part of counterterror investigations.

Turkish officials have so far ruled out any political influence in these investigations, stressing that independent courts would decide on these cases.

Turkey's relations with Germany and several other EU member states have suffered further setbacks in recent months, as Turkish leaders slammed their counterparts for failing to demonstrate strong solidarity with Ankara over the defeated coup attempt on July 15, 2016. Ankara has also denounced what it sees as German authorities providing support to groups that are hostile toward Turkey.

The Foreign Ministry also issued a diplomatic note to Germany on Wednesday over reports that claim Adil Öksüz, one of the suspected masterminds of the failed coup attempt, was spotted in Germany. According to diplomatic sources, Turkey issued the note and requested the extradition of fugitive Öksüz, who is accused of perpetrating the July 15, 2016 coup attempt on behalf of the Gülenist Terror Group (FETÖ), if he is indeed in Germany.

Several EU countries also voiced concerns over the rule of law and human rights issues amid widespread investigations by the Turkish authorities into the Gülenist Terrorist Group (FETÖ). In Germany, which is home to more than 3 million Turkish immigrants, FETÖ has a large network with dozens of private schools, businesses and media organizations. Since the coup attempt, nearly 4,000 FETÖ suspects have come to Germany from Turkey and other countries, according to local media reports.

After Merkel's remarks on Turkey, Turkish Deutsche Welle reported that the German government is trying to turn its recent political strife with Turkey into state policy, claiming that it is not an ephemeral issue targeting elections in Germany.

The Turkish edition of the German-based paper claims that German diplomatic sources have stated that the country had been a strong advocate for the expansion of the scope of the customs deal, but reversed its attitude after the recent turn of events.

Germany was also reported to have initiated simultaneous diplomatic talks about its new policy for Turkey with EU governments, in addition to the European Commission. Seeking support from other members, the report claims, German officials do not see this recent change in policy as a temporary one, nor is it directed towards the elections next month.

Effective business policy with EU is necessaryAs the only non-EU member country that has had a customs union agreement with the EU since 1996, Turkey has been one of the largest trade partners of the union with an export value of 66.7 billion euros and an import value of 78 billion euros in 2016 in goods alone. As for services, Turkish exports to the EU totaled 16.4 billion euros and imports of services stood at 12.2 billion euros, according to European Commission (EC) data. Among EU states, Germany has been the top destination for Turkish goods for a while. July export data reveals that Germany was the top market for Turkish exports in eight sectors, including the automotive, ready-to-wear, iron, machinery, air conditioning, hazelnuts, fruits and vegetables and dried fruits sectors.

Despite Germany's attempts to curb the update process, these figures make Turkey by far the number one trade partner, as the EC itself has confirmed. As such, both politicians and experts argue that a modernized Customs Union would be lucrative for both parties.

In its December 21, 2016 assessment, the EC proposed the modernization of the current deal, which only covers a limited range of industrial products and excludes agriculture, public procurement and services. Highlighting that the upgrade of Turkey-EU trade relations forms an essential part of efforts made by Turkey and the EU to deepen relations in key areas of common interest, the EC reiterated its resolution to continue delivering on the commitments it has made as part of the deal with Ankara. "Modernizing the Customs Union to reflect current EU-Turkey trade relations would bring substantial economic benefits for both partners," the commission said in its proposal.

A 2017 report prepared by Brussels-based think-tank the European Neighborhood Council in association with the Independent Industrialists' and Businessmen's Association (MÜSİAD) outlines that a reformed Customs Union will make a 1.44 percent contribution to Turkey's gross domestic product (GDP) while it enables the growth of the EU economy by 0.01 percent. Not taking the impacts of services and public procurement liberalization into account, this calculation is considered important for both sides. Yet, when the services and public procurement are included, EU exports to Turkey are predicted to increase by 27 billion euros whereas Turkish exports to the bloc are expected to increase by 5 billion euros.

Albeit an important agreement, the Customs Union was initially devised for a temporary period and as a result of trade diversion and global shifts, it is now losing its purpose and institutional strength as a win-win economic deal, remaining an unfinished architecture.Reacting to the ongoing debates fueled by political agenda, members of the Turkish business circle previously called for well-calculated and temperate business diplomacy to provide a fruitful platform for a win-win basis, which Turkey reiterates on every occasion. Chairmen of both MÜSİAD and the Foreign Economic Relations' Board (DEİK) expressed the necessity to manage this process, which was spoiled by Germany's political motivations and harsh policy on Turkey, through effective and thoughtful negotiations.