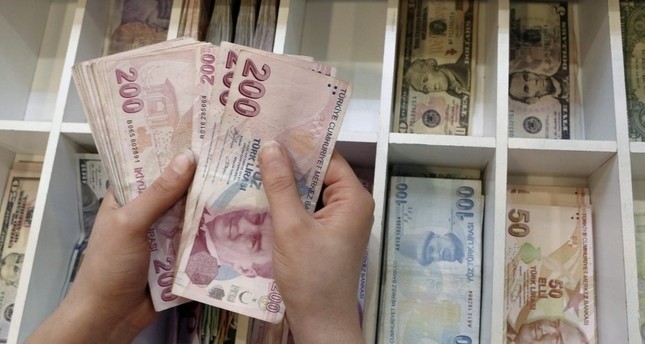 Since February, Turkish lira has been gaining ground against the dollar.
by Daily Sabah with AA
Aug 23, 2017 12:00 am

Supported by effective central bank policies, geopolitical risks affecting the dollar and dovish expectations from the Fed, the Turkish lira has managed to compensate for some of its losses and has risen almost 8 percent in value over the last six months, enjoying a beneficial atmosphere in currency markets

The Turkish lira (TL) is maintaining its upward trend against the dollar, which began in February this year.

The dollar made gains against the TL starting in September last year, reaching a high of 3.9422 at the beginning of this year. The TL, which began recovering in February following the intervention of the Central Bank of the Republic of Turkey (CBRT) and low demand for dollars due to political uncertainties surround U.S. President Donald Trump, gained 7.96 percent in six-and-a-half months.

Dollar-TL exchange rate was 3.50 as of yesterday, and experts predict that the rise in TL could continue.

Ahead of the Jackson Hole meetings that will start on Thursday, U.S. Federal Reserve (Fed) Chair Janet Yellen is not expected to be hawkish because of weak inflation in the U.S. Moreover, the carry-trade on TL is boosting the currency's value analysts claim, as the successful Treasury auction, which increased the value of Turkey's TL and dollar-denominated bonds. Moreover, Deputy Prime Minister Mehmet Şimşek's announcing that snap elections are off the table have also been supportive for the currency, according to analysts who closely follow TL movements. In that sense, away from elections and focusing on economic reforms until 2019, Turkey attempts to portray itself as an alluring investment destination.

Rabobank Emerging Markets FX Strategist Piotr Matys told Anadolu Agency (AA) that the TL is positively affected by the CBRT's policies and that Turkey's strong growth is positive for the currency.

Matys stressed that expectations about the acceleration of economic reforms in the coming quarters can be a positive signal for foreign investors, adding that interest in risky assets has decreased with the increase in tensions between the U.S. and North Korea and the TL has managed to cope with the decreased appetite for risk.

Foreseeing that the Fed will not be able to raise interest rates this year due to low inflation, Matys said the TL could appreciate more against the greenback at the end of the year, maybe hitting 3.40.

DenizBank Investment Strategy Director Orkun Gödek said that since the CBRT has continued to implement tight monetary policies it will maintain its current situation until a significant decline in inflation protects the TL against fluctuations and depreciation on difficult days.

He said that provided external conditions are favorable and the expected lowering of inflation occurs, optimism will increase in interest and the TL in the first quarter of 2018, but risks should not be ignored.

Gödek said that the possible withdrawal of the euro-dollar exchange rate, uncertainties about how the European Central Bank (ECB) and the Fed will lead monetary policies, important geopolitical risks such as North Korea and political troubles within the U.S. administration may accelerate portfolio output from risky assets.

"Let's not forget that we experienced this situation last week. Technically, I do not expect the sales pressure in TL to increase without exceeding the resistance level of 3.5520. We can see that the broadband range of 3.50 to 3.60 has been preserved for some time," he said. "3.50 stands out in technical and psychology terms. We can see that demand increases in downward shifts."

Strategist Cüneyt Paksoy recalled that the withdrawal period from the range of 105 to 100 started in the dollar index after then president-elect Trump said that the dollar was relatively expensive and that the U.S. economy needed a cheaper dollar on the global scale to not lose its competitive power.

Paksoy said that the withdrawal period in the dollar index garnered support from the turbulent presidency of Trump and his term gradually stepping into a serious political crisis, stressing that the fact the index fell to 93 provided developing country currencies and the TL with a significant opportunity to appreciate. Paksoy said that the Fed's shift to a more moderate mode from a hawkish outlook and attitude by assessing this environment, no interest rate hike in September as was expected and expectations surveys from December, which remain unresponsive for the time being, have allowed the dollar index to remain relatively low for now. He said the Fed's desire to move toward gradual and measured balance sheet downsizing since September has not been priced for the time being by the markets. "However, this outlook and market perception are likely to change by September. In this period, the TL was also included in the positive divergence process in addition to appreciation."

Stressing that relaxation in the range of 3.49 to 3.50, which includes the 200-day exponential average in the current situation, will be very important from now on, Paksoy said that the relatively stable course on bonds and the CBRT's determination to continue its tight monetary policy have also contributed to the decline in volatility in the dollar-TL exchange rate and the continuation of withdrawal.

Paksoy said that in the next period eyes will be on U.S. politics, geopolitical developments centered on North Korea and the Middle East and the steps of leading central banks such as the Fed and ECB, adding that the speeches of ECB President Mario Draghi and Yellen during the Jackson Hole meeting on Aug. 24-25 will be monitored.

He also added that the domestic political developments that have recently accelerated, data to be disclosed on the economy, the steps to be taken by the CBRT and the effects of foreign perception and trading reflexes on the bond and exchange rate pricing will also be watched closely.