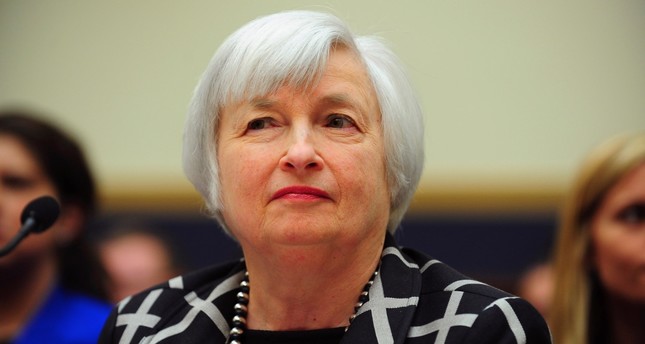 Carefully scripted remarks by the world's leading central bankers on Friday left the dollar lower but had a muted effect on global stocks, while crude prices rose as monster Hurricane Harvey approached the US Gulf Coast oil hubs.

Analysts had not been expecting major announcements heading into Friday's much-anticipated summit of central bankers in Jackson Hole, Wyoming.

But the possibility of a surprise from Federal Reserve Chair Janet Yellen or European Central Bank chief Mario Draghi kept investors on edge.

Yellen, in a speech defending tough banking regulations enacted after the 2008 financial crisis, did not address whether the Fed would stick with its plan to carry out a third interest rate hike in 2017 -- a move increasingly in doubt.

The dollar fell sharply on the remarks, with the losses picking up later in the day.

"The Fed chair's speech was mum on monetary policy, which hurt the dollar by keeping uncertainty high about whether the central bank would boost interest rates again this year," said Joe Manimbo, senior market analyst at Western Union Business Solutions.

Draghi made equally few waves in his speech, warning of the creeping move in developed nations towards protectionism, but steering clear of addressing when the ECB may wind down a post-crisis bond-buying stimulus program.

The ECB leader's remarks did nothing to shift the market's expectation that the central bank will soon taper the program, but raised anticipation ahead of the next ECB meeting on September 7, said a note by ING Bank.

"We expect the ECB to at least present a game plan at the September meeting, probably enriched by a clear message that the relevant committees have been tasked to investigate options for tapering," the ING note said.

"A dovish tapering which avoids the so-called unwarranted tightening of financial conditions is what the ECB is aiming at. Taper tiptoeing will continue."

Oil prices rose as some petroleum producers shut down platforms due to Hurricane Harvey and gasoline prices gained in anticipation of refinery outages.

Share on Facebook Share on Twitter
Previous in Economy According to the Individual Participation Capital (IPC) 2017 second-quarter... Next in Economy With a 7.5 percent growth in the third quarter, Turkey will rank second...
DAILY SABAH RECOMMENDS