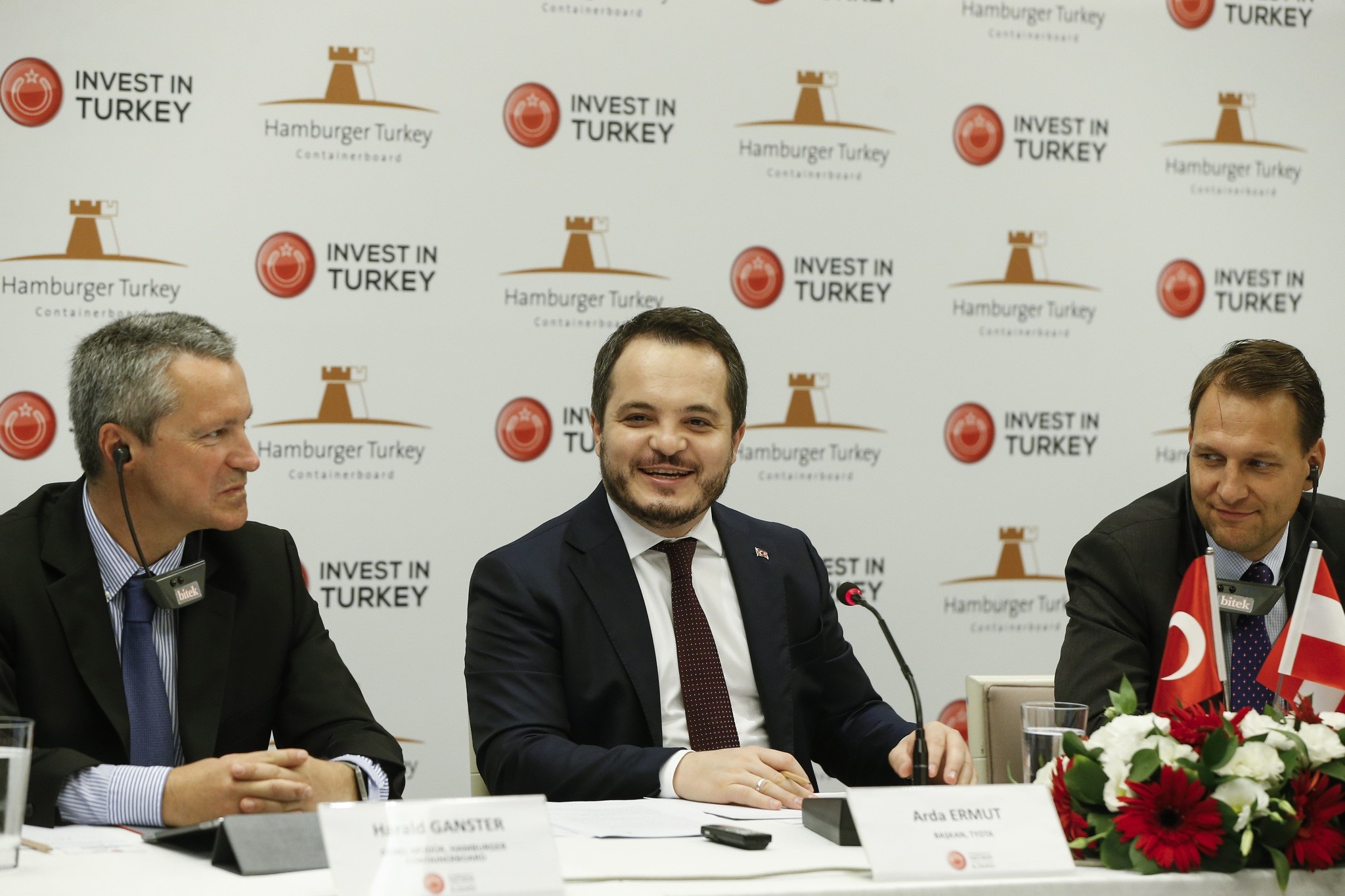 The investment, which was accomplished with the laborious support of the Investment Support and Promotion Agency of Turkey (ISPAT), includes the foundation of a new facility for the manufacturing of fully recycled paper, directly generating 500 jobs. The CEO of the group highlighted that the company has trust in Turkey's stable future and the country's welcoming, investment-friendly environment during the announcement meeting.

Speaking at a press conference organized by ISPAT and attended by representatives of Hamburger Containerboard along with local business authorities from Kütahya, Prinzhorn Holding CEO Cord Prinzhorn emphasized that Turkey is more welcoming for foreign investors than his own country, where investors are not regarded positively.

Particularly drawing attention to the extensive support of ISPAT and ISPAT President Arda Ermut as well as the Kütahya Development Agency and the Organized Industrial Zone (OIZ) authorities, Prinzhorn indicated that the company itself feels like a Turkish one, as the country mobilizes every possible means to facilitate foreign investment.

"We have invested in Turkey because we trust in the future of this country," Prinzhorn said, adding that establishing a facility from scratch is an investment decision that spans the next 20, 30 and 50 years. Pointing to Turkey's geographic location, which offers great opportunity for exchanging in export operations to nearby markets, he added: "Over the course of our operations that began in 2013 with the acquisition of Dentaş Kağıt A.Ş., we have seen Turkey's stable future and understand that the country is a very productive manufacturing and export market."

Emphasizing the environmentally friendly policy of Hamburger Containerboard, ISPAT President Ermut noted that the agency works to attract investments that will bring added value to the country's economic operations. Therefore, Ermut said, the deal should not be only seen as a great investment opportunity but as a way to help raise environmental awareness thanks to Hamburger's eco-friendly policy that vouches for the paper-for-recycle method rather than considering paper as a waste material.

Indicating that Hamburger Turkey, the Turkish subsidiary of Hamburger Containerboard, has three paper mills and packaging plants in Denizli, Çoru and Adana, the company has also acquired facilities in Eskişehir. Ermut also announced that the investment worth 300 million euros, which came as a result of three years of labor under the coordination of ISPAT, would be operational by 2020.

Elaborating on the foreign direct investment (FDI) Turkey has attracted in the first six months of the year, Ermut emphasized that the FDI flow into Turkey registered a 50-percent increase compared to the same period last year, amounting to $4.9 billion. He also indicated that the figures in the first six months suggest that 2017 will be better than last year, which saw a $12.3 billion FDI flow, 57 percent of which came after the failed coup attempt of July 15.

Hamburger Containerboard CEO Harald Ganster provided information about the financing of the project, saying that 50-60 percent of the financing will be provided from the company's equity while the rest will be secured from foreign banks, stressing that interest rates to obtain large loans in Turkish banks are still very high.

When asked about "red tape" processes in Turkey, Ganster emphasized that the bureaucratic processes for investment in Turkey are not as complicated as in other European countries, particularly Austria. In fact, he particularly emphasized the extensive support of ISPAT in removing the red tape for foreign investors.

The new Hamburger Containerboard paper mill will have an annual production capacity of 480,000 tons of container board and is expected to be completed by 2020. The investment is the company's third paper mill in Turkey and its first green field investment, a type of investment that requires an investment from scratch where a parent company builds its operations in another country from the ground up and constructs new production facilities. The investment will also benefit from the corporate tax reduction, unlimited employer support for social security and value added tax (VAT) exemption as the project was classified as a 5th Investment Incentive Region.