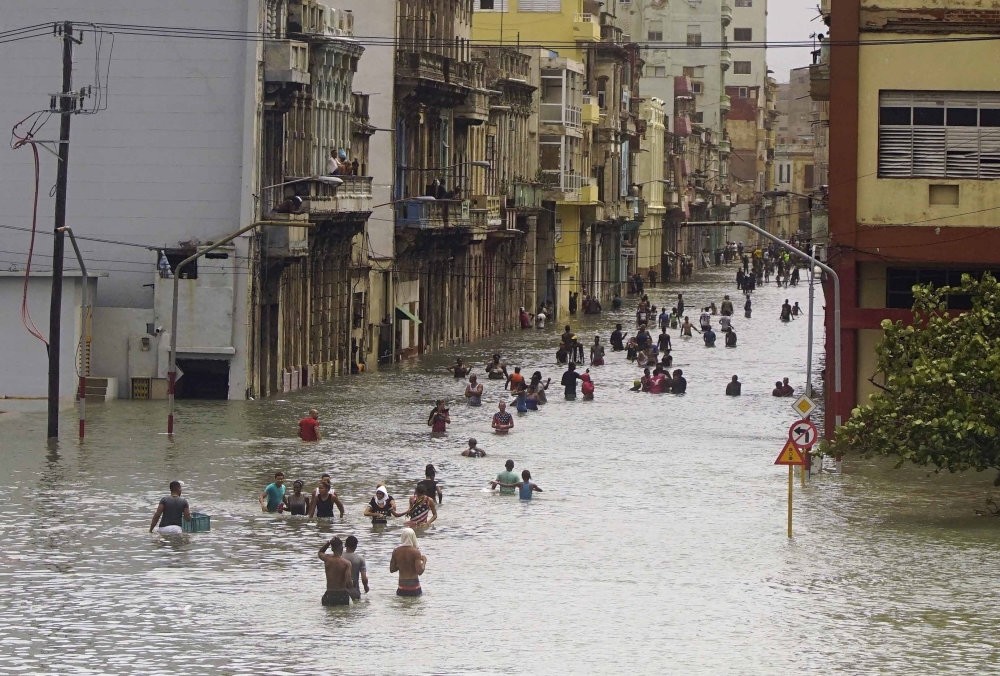 People move through flooded streets in Havana after the passage of Hurricane Irma, in Cuba.
by Sep 14, 2017 12:00 am

Already stricken by economic hardships due to declining exports and market reforms, the Cuban economy was hit hard by Hurricane Irma, which greatly damaged the country's infrastructure, blowing its tourism and agriculture

Cuba's cash-strapped economy has suffered this year from a decline in aid from its chief ally Venezuela, lower exports and a brake on market reforms. And then came Hurricane Irma. The strongest storm to strike Cuba in more than 80 years ravaged infrastructure throughout the country, collapsing the power grid and damaging crops after it slammed ashore late Friday. In the keys along the northern coast, it battered beach resorts popular with foreign tourists and knocked out the airport they use.

The cost of rebuilding as well as the lost revenues from tourism and agriculture, sectors that had helped offset some of the economy's weaknesses, are heavy blows as the Communist nation strives to pay overseas creditors and suppliers.

"The probability that the economy stays in recession are now much greater," said former Cuban central bank economist Pavel Vidal, now a professor at Universidad Javeriana Cali in Colombia, of chances for a second straight full-year contraction in 2017.

"With the impact on installations in the keys and on the country's general infrastructure, tourism will lose dynamism."

A tourism boom in Cuba over the past few years sparked by warming relations with the West has helped sustain the economy. Cuba is still labouring under a 57-year U.S. trade embargo and suffering from a steep decline in subsidized oil from its crisis-stricken Socialist ally Venezuela.

Official data - which gives heavy weighting to Cuba's universal free healthcare and education - shows hotels and restaurants account for just 4.4 percent of the roughly $90 billion-a-year economy, but they are a vital earner of hard currency.

A 23 percent rise in foreign visitors to Cuba helped the economy return to growth in the first half of 2017, the government said, after it tipped into recession in 2016.

The outlook has darkened in the second half of the year.

First U.S. President Donald Trump said he was tightening restrictions on Americans traveling to Cuba. Then the Cuban government said last month it would not hand out new licenses for much of the private sector until it had "perfected" its functioning.

Then Irma arrived, grazing along the island's coast from east to west. Packing sustained winds of more than 157 miles (253 km) per hour

The keys - whose pristine beaches are home to around a quarter of Cuba's four- and five-star hotels - are now littered with felled trees and lamp posts, animal corpses and shredded furniture, according to state-run media.

Irma destroyed much of the area's single-runway airport, which receives more than 485,000 passengers a year.

President Raul Castro vowed on Monday that tourism infrastructure would be fixed before the start of the winter high season at year-end.

Eric Peyre, a representative at French hotel company Accor SA which runs the Cuba-owned Pullman hotel in Cayo Coco, said that damage would be covered by insurance and he expected 90 percent of what the hotel needs would be in place by mid-December.

"As long as you have the main kitchen and the main restaurant and rooms (ready), you can normally welcome guests," he told Reuters. "The tennis court and things like that, that can come after."

Still, hotels in the keys face revenue loss for the months that tour package operators sent their clients elsewhere and it could prove tricky to rebuild the area's reputation.

HURRICANE AFTER THE DROUGHT

Damage in the agricultural sector will both weigh on state finances as well as tighten food supply in the short term. Fuller reservoirs due to Irma's torrential rains could in the long run prove advantageous after a severe drought.

Some 300,000 hectares (740,000 acres) of sugarcane - an area roughly twice the size of Houston - were affected to different degrees, the state sugar monopoly said.

Forty percent of mills were damaged in the industry that remains one of Cuba's most important in terms of employment and export earnings.

Even though Cuba had rushed to harvest what it could before Irma hit, other crops such as platano and rice had also reportedly been affected, said Laura Melo, the Cuba representative for the United Nations' World Food Programme.

"Some of these areas were already seriously affected by drought so this is an accumulation of shocks to Cuba's capacity to produce food, both in terms of income and availability of food," said Melo.

Looking ahead, Cuba will need to repair tens of thousands of houses as well as roads, bridges, public buildings and the power grid. Irma also damaged a thermoelectric plant that provides a fifth of the country's electricity.

"If this year, the budget deficit was estimated at around 12 percent," said Cuban economist Omar Everleny. "That will undoubtedly have increased with these enormous losses."