Landmark trade deal between EU and Canada enters into force 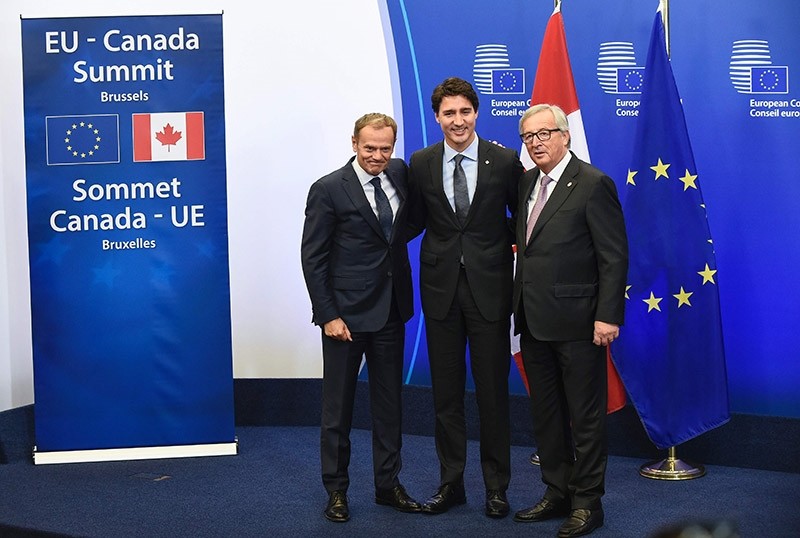 A new trade agreement between the European Union and Canada entered into force on Thursday, eight years after the first negotiations began.

The Comprehensive Economic and Trade Agreement (CETA) removes duties on 98 per cent of products that the EU trades with Canada.

Since some national parliaments still must approve CETA before it can take full effect, it has entered into force provisionally.

Only six countries have so far completed the process: Latvia, Denmark, Spain, Croatia, Malta and Portugal, which voted in favor on Wednesday.

Canada called the deal "one of the most progressive ever" and lit the iconic CN Tower in Toronto with the EU's official colors late Wednesday.

The deal "will brighten a prosperous future for our middle class," Canadian Trade Minister Francois Philippe Champagne said in a tweet.

"This agreement encapsulates what we want our trade policy to be -- an instrument for growth that benefits European companies and citizens," European Commission President Jean-Claude Juncker said in a statement.

However, it is "also a tool to project our values, harness globalization and shape global trade rules," he added.

According to EU figures, the value of trade in goods between the EU and Canada was 64.3 billion euros (76.62 billion dollars) in 2016.

Machinery, transport equipment as well as chemical and pharmaceutical products are the top three categories of products which the EU and Canada export to each other, according to 2016 figures.

Left out of the deal until the end of the ratification process is a controversial investment protection scheme, a usual component of international trade deals.

Under the scheme, companies have recourse to legal arbitration if they believe their rights have been violated by a change in government policy.

This provision raised huge concerns among activists groups that fear the rollback of European regulation on the environment and health if faced with the opposition of powerful multinationals.

"It is unacceptable for CETA to come into force before national parliaments have had their say," said Greenpeace trade campaigner Kees Kodde.

"Canada has weaker food safety and labeling standards than the EU, and industrial agriculture more heavily dependent on pesticides and GM crops," he added.

It was these concerns that led the Belgian region of Wallonia, with a population of 3.6 million, to hold up the deal until it won concessions for its farmers.

It also demanded guarantees that the investor scheme face further legal scrutiny by the European Court of Justice, the EU's top court. That opinion is still pending.

Activists' anger intensified over CETA when the EU embarked on an even larger -- and more controversial -- deal between the EU and the United States.

Negotiations for that deal, known as the Transatlantic Trade and Investment Partnership (TTIP), have however been frozen since the election of Donald Trump, who reached the US presidency on a staunchly anti-globalization platform.