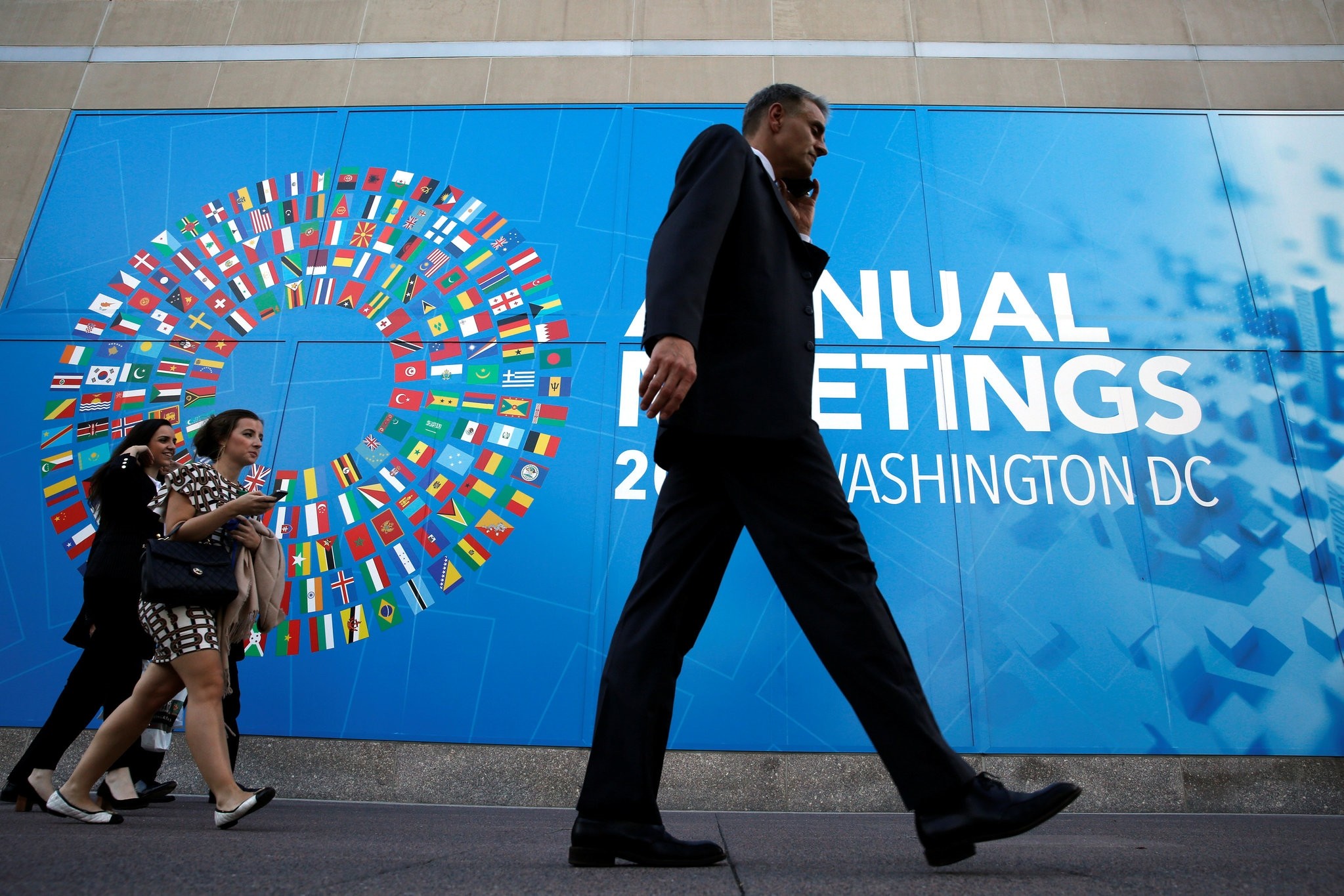 Delegates leave International Monetary Fund headquarters in the end of the day during the IMF/World Bank annual meetings in Washington, U.S., October 14, 2017. (Reuters Photo)
by Associated Press Oct 15, 2017 12:00 am

Global finance leaders on Saturday appealed to central bankers to stick as long as possible with low-interest rate policies that have made borrowing attractive and helped safeguard an improving but still fragile world economic recovery.

Declaring the "recovery is not complete" even eight years after the 2008 financial crisis, the 189-nation International Monetary Fund wrapped up its fall meetings with a communique warning "there is no room for complacency" as nations confront new challenges to global growth from a range of threats, including cyber-security attacks and more violent weather patterns linked to climate change.

The meetings also dealt, at least on the sidelines, with efforts to better understand the policy implications of the Trump administration's more forceful "America First" agenda.

Treasury Secretary Steven Mnuchin said he had productive discussions during nearly 20 one-on-one meetings with other countries plus the joint sessions of the IMF and World Bank policy committees, as well as two days of talks centered on the Group of 20 major industrial countries.

Donald Trump won the presidency with pledges to toughen enforcement of U.S. trade laws and trim huge U.S. trade deficits with nations such as China and Mexico, which Trump has accused of unfair trade practices that have cost millions of American manufacturing jobs.

Mnuchin said he agreed with an assessment of German Finance Minister Wolfgang Schaeuble that the discussions this week were more relaxed than the initial talks held earlier this year, when the Trump team had first taken office, because there was a better understanding of Trump's goals.

"We believe in free and fair and reciprocal trade," Mnuchin told reporters Saturday, saying the Trump administration is simply trying to make sure U.S. workers and companies are treated fairly in trade deals with other nations.

Mnuchin said he carried in his pocket a list of all the G-20 nations and the size of the trade deficits the United States has with those nations.

Schauble, the chairman of the G-20 finance group this year, said he believed the backlash against globalization was giving way to a greater understanding that the path toward rising prosperity for all depends on greater cooperation among countries.

But the Trump administration so far has been highly skeptical of various multilateral organizations. This week, the United States pulled out of UNESCO, the United Nations' cultural agency. It has scrapped an Asia-Pacific trade deal and is threatening to pull out of the North American Free Trade Agreement with Canada and Mexico. And it is has balked at providing additional capital to the World Bank unless the anti-poverty agency rethinks the way it distributes loans.

In his speech Saturday to the IMF policy group, Mnuchin said he wanted to see the IMF be a more "forceful advocate" for strong global growth by imposing more stringent surveillance on the economic policies being pursued by its member countries and by taking a hard look at changes that needed to be made by countries running large trade surpluses.

While the IMF communique called on major central banks to protect the global recovery by being cautious in withdrawing the support it has had in place since the 2008 financial crisis, in many cases the trend seems to be moving in the opposite direction.

In the United States, the Federal Reserve has raised short-term interest rates twice this year and is beginning to reduce its large portfolio of bonds, a move that could push long-term rates higher. In Europe, the euro currency has risen since spring on expectations that the European Central Bank will withdraw its long-standing stimulus program. The ECB meets Oct. 26.

"Monetary policy should remain accommodative, where inflation is still below target and output gaps" still exist, the communique said.

On Saturday, Ivanka Trump, the president's daughter and a White House adviser, appeared with World Bank President Jim Yong Kim to launch a World Bank initiative to support women entrepreneurs. The World Bank fund has raised $350 million, which is designed to allow the World Bank to deploy at least $1 billion in capital to finance women-owned businesses.

Ivanka Trump told the audience she wanted to "spend a lot of time offering any value that I can as a mentor."