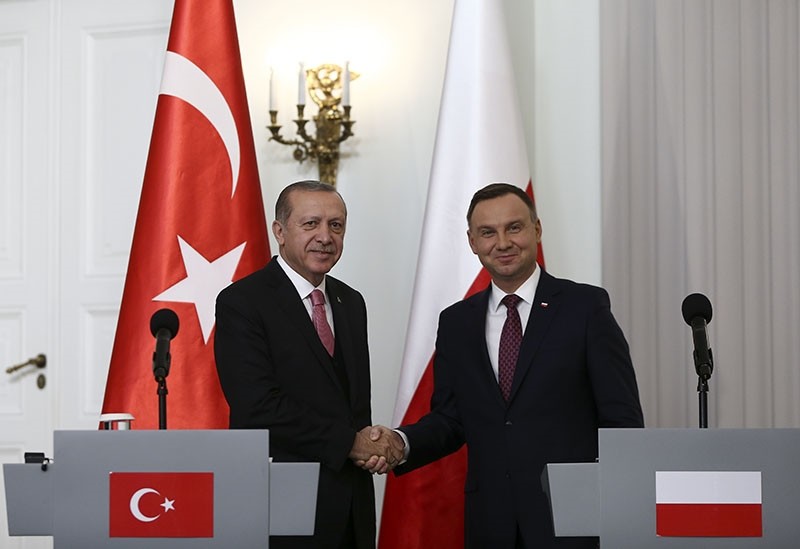 In a bid to discuss strengthening bilateral trade ties and boost mutual investment, President Recep Tayyip Erdoğan paid an official visit to Poland yesterday with an entourage of 200 businesspeople and representatives from the Foreign Economic Relations Board (DEİK). Both countries have expressed a strong intention to increase the current trade volume to $10 billion while supporting the expansion of mutual investments.

Before joining the Turkey-Poland Business Forum, Erdoğan and Polish President Andrzej Duda held a joint press conference in which the two leaders elaborated on political, cultural and economic ties.

Both leaders pointed out the mutual potential to increase the current $6 billion bilateral trade volume. Erdoğan emphasized that the total population of Turkey and Poland is around 118.5 million and referenced the joint intention to raise the trade volume between Turkey and Poland to $10 billion within the next five years. He also stressed that the increase must be based on a win-win principle that benefits both countries.

Trade between Turkey and Poland has more than doubled over the last 10 years, rising from $2.49 billion in 2006 to nearly $6 billion last year, according to Turkey's Economy Ministry. Turkish exports to Poland were worth $1.9 billion between January and September while imports were valued at $2.1 billion.

Erdoğan also said that the two parties discussed energy matters. Citing Turkey's position as an energy transit country, he said: "We are not an energy producer, but we are a significant distribution hub."

Erdoğan further referred to vast coal production in Poland and the existence of thermal power plants and stated that Turkey also has an immense potential in coal-based energy generation. The country is the EU's largest coal producer, having produced 12.2 million tons of metallurgical coal in 2014. Moreover, in 2009, Poland was the world's ninth-largest hard coal producer.

Poland produced an estimated 134.5 million tons in 2016, which is expected to increase to 136.7 million tons this year. Positive growth is forecasted until 2021, by which stage coal production should be 142.8 million tons. In a bid to reduce dependency on Russian natural gas, Poland imported liquefied natural gas (LNG) from the U.S. in early June. The gas came from an export terminal in Louisiana that was first out of the gate to exploit the U.S. shale boom to supply the global market.

Turkey is working to renovate its lignite coal-fired power plants with cutting-edge technology to comply with the highest environmental standards.

According to statistics published by the Energy and Natural Resources Ministry, by the end of 2015, Turkey possessed 126.9 million tons of equivalent petrol (MTEP), with the share of coal in total primary energy consumption standing at 27.3 percent compared to its share worldwide of 40 percent.

"Tourism also sees good developments," Erdoğan said. "During the first eight months of this year 205,000 tourists from Poland visited Turkey with a significant increase from the previous years." However, he said that when the Schengen visa problem is resolved, more tourist exchanges will occur between the two countries.

Erdoğan also announced that a delegation from Turkish Airlines (THY), which currently has five regular flights to Poland, will visit the country to discuss raising the number of weekly flights.

Later, addressing Turkish and Polish businesspeople at the Turkey-Poland Business Forum, Erdoğan emphasized Turkey's economic growth over the past 15 years, particularly the economic recovery after the July 15 coup attempt and the 5.1 percent growth in the first half of the year. He also explained that mega projects such as the Osmangazi Bridge, Yavuz Sultan Selim Bridge, Eurasian Tunnel and the 1915 Çanakkale Bridge all serve to facilitate trade.

Erdoğan also said that Turkey will be very accommodating and welcoming to Polish businesspeople. He concluded his speech by expressing his expectation for holding a Turkey-Poland Economy Consultation Meeting.