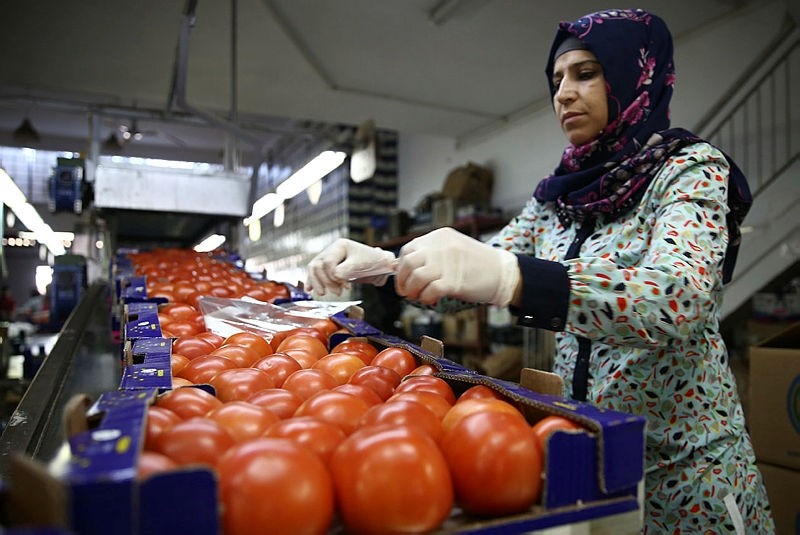 Russia has backdated the import of 50,000 tons of Turkish agricultural products, including tomatoes, one month ahead of schedule to Nov. 1.

Economy Minister Nihat Zeybekci confirmed the move to reporters on Saturday following a meeting of the Russian-Turkish Intergovernmental Commission on Trade and Economic Cooperation in Kazan, the capital of the autonomous Republic of Tatarstan in Russia.

"As of late October, tomatoes and other agricultural products from Turkey will start going to Russia," Zeybekci said, adding that all the restrictions had been removed.

"Turkey's main principle is to ensure that there are no obstacles to trade and investment between the two countries," he said.

"The decision was made, in principle, to allow the import of 50,000 tons of tomatoes to Russia [from Turkey] starting on Nov. 1," Novak said.

The Russian minister said that some formal procedures are ongoing but the resolution regarding tomato imports will come into force as soon as Turkey "removes bureaucratic barriers."

Novak stressed that Moscow and Ankara are continuing efforts to lift restrictions in agriculture between the two countries.

"We agreed that these efforts should be built on a mutual basis and will continue," he said.

The Russian minister had previously announced on Wednesday that Moscow would allow the import of 50,000 tons of Turkish tomatoes to Russia starting from December.

Economy Minister Zeybekci, in turn, thanked Novak for the "good news," saying that there were no more agricultural products left under restriction.

"Our main principle regarding Turkey and Russia's commercial and economic relations focuses on ensuring that there are no obstacles for trade, investment and economy between the two countries," Zeybekci said.

Turkey, which formerly provided 70 percent of tomato exports to Russia, was placed under a Russian embargo effective on Jan. 1, 2016, following the downing of a Russian warplane that violated Turkish airspace.

The country imposed import sanctions on many Turkish products including tomatoes, oranges, apples, apricots, broccoli, tangerines, pears, chicken and turkey. The ban was later lifted after normalization talks began, with the exception of tomatoes.