Turkey to boost mutual agricultural and trade volume with Bosnia 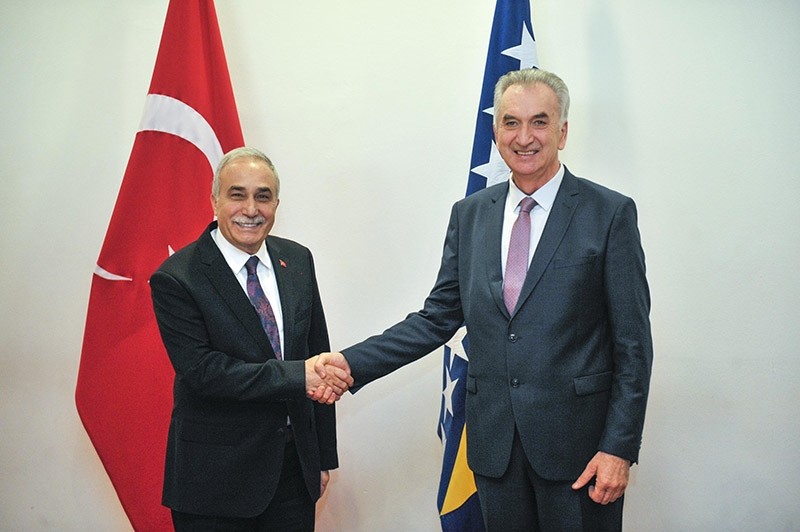 Turkey's Minister of Food, Agriculture and Livestock Ahmet Eşref Fakıbaba said on Thursday increasing trade volume with Bosnia is one of the major goals of the country.

"Increasing the trade volume between the two countries is among our most important goals, and I am confident that we will reach the target of $1 billion in a very short time," said Fakıbaba.

Around 100 Turkish business people are also participating in the forum along with the minister.

"We aim to improve the mutual agricultural and trade volume and increase the opportunities for business associations. I am confident that important trade links will be established at the bilateral talks…," said Fakıbaba.

Bosnia and Herzegovina's Foreign Trade and Economic Relations Minister Mirko Sarovic said Bosnia improves its trade balance with Turkey every year. He said Turkey is the country where they exported most agricultural products in 2016.

Fakıbaba also held a delegation meeting with his Bosnian counterpart after the forum.

Member of the Board of Union of Chambers and Commodity Exchanges of Turkey (TOBB) Faik Yavuz stated that the free trade agreement signed with Bosnia and Herzegovina in 2003 established a solid ground between the two countries and since then it has increased the trade volume by 10 times.

Yavuz noted that there are 100 Turkish companies operating in many sectors in Bosnia, mainly in agriculture.

Currently, the trade volume between Turkey and Bosnia and Herzegovina is more than $600 million.