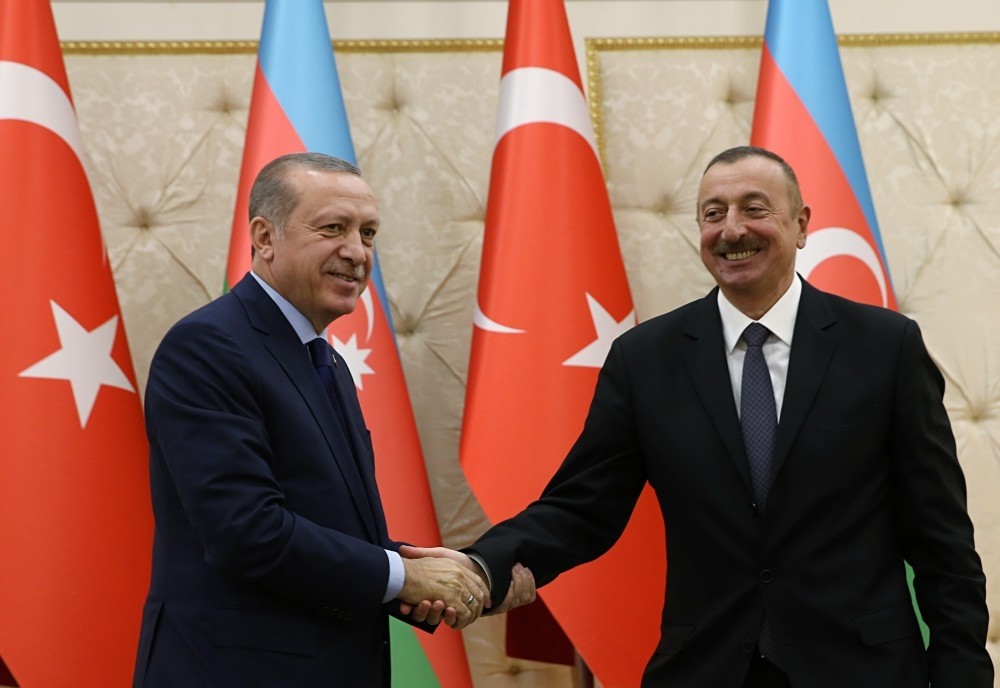 President Erdoğan's visit marked the determination and willingness of Turkey and Azerbaijan to continue their established relations in many areas, including trade, energy, transportation, defense and politics

On the second day of his official visit to Azerbaijan, President Recep Tayyip Erdoğan and Azerbaijani President İlham Aliyev highlighted the existing cooperation between the two countries, which expands into energy, transportation, trade and defense. Cherishing these bilateral ties, Erdoğan said the robust partnership in politics, defense, economy, energy, trade and culture as well as the continuous communication and rapport between Turkey and Azerbaijan demonstrate the solidarity between the two countries very well.

Delivering an address at a joint press conference after the Turkey-Azerbaijan High-Level Strategic Cooperation Council Meeting, Erdoğan emphasized that the long-standing friendship and collaboration between the two countries will continue sustainably. Drawing attention to the cooperation in politics, military, defense, energy and tourism with Azerbaijan, Erdoğan said: "The continuous energy partnership between Turkey and Azerbaijan strengthening with the addition of new pipelines demonstrate the durability and sustainability of this cooperation," referring to the ongoing Trans-Anatolian Natural Gas Pipeline (TANAP) project, which will be operational in 2018, and start delivering gas from Azerbaijan to Europe in 2020. He said that TANAP sets an example of how energy cooperation links continents to one another.

TANAP will bring natural gas produced from Azerbaijan's Shah Deniz-2 gas field and other areas of the Caspian Sea primarily to Turkey, but also to Europe via the Trans-Adriatic Pipeline (TAP).

The project is planned to be operational by 2018 with an initial capacity to carry 16 billion cubic meters (bcm) of Azerbaijani gas through Georgia to Turkey. While 6 bcm will be for Turkey's domestic consumption, the rest is destined for transfer to Greece, Albania, and Italy and further into Europe, hence aiming to boost the European energy supply security.

Erdoğan also spoke about the Baku-Tbilisi-Kars (BTK) Railway, which became operational on Monday with a grand ceremony in Baku: "Opening the Baku-Tbilisi-Kars Railway enables us to stand at a stronger position in linking Asia to Europe via railways." He also expressed his wish for the opportunity to travel from Beijing to London on the Silk Road Railway, of which the BTK is a link.

As one of the land routes for China's Belt and Road initiative passes through Turkey, Kazakhstan, Azerbaijan and Georgia, the BTK Railway has gained significance as it is expected to provide the direct transfer of goods from Beijing to London in around 12 to 15 days.

Some 1 million passengers and 6.5 million tons of cargo will be transported on the line. This will likely lead to the emergence of potential for international transport, reaching 50 million tons per year between Turkey and Asia, the Caucasus and European countries via the BTK Railway.

Regarding bilateral trade, Erdoğan said the current volume stands around $1.6 billion and the low oil prices negatively affected the trade between the two countries. "I believe we will raise this amount to $5 billion quickly," he said.

Referring to the Cabinet decision to import $120 million per year of products from Nakhchivan, Erdoğan said the plan aims to revive Nakhchivan's economy and strengthen the region.

According to the Cabinet decision, Turkey will purchase 43 products from Nakhchivan as if it were a trade operation within the country. A trade volume of $120 million is expected with this move and trade with the Nakhchivan Autonomous Republic, which is an exclave in Azerbaijan bordering Armenia, Turkey and Iran, will be done in Turkish lira.

The ever-strengthening partnership in politics, defense, economy, trade and culture and the continuous communication and rapport between Turkey and Azerbaijan, very well demonstrate the solidarity between the two countries, Erdoğan said.

Azerbaijan is scheduled to organize an expo for which Turkey will provide all and any kind support with its means available, Erdoğan said, citing Turkey's experience in expos as the country organized one last year in Antalya.

Aliyev confirmed that military cooperation is a matter included on the agenda between Turkey and Azerbaijan. He recalled that Azerbaijan and Turkey held three joint military exercises this year.

"Two of the exercises were held in Baku, one in Nakhchivan. This is a factor that strengthens our cooperation in the military sphere. We also continue to cooperate in the military-technical field," the Azerbaijani president said.

Azerbaijan is very interested in Turkey's military industry complex, which is growing day by day, President Aliyev said, adding: "We purchase and will continue to purchase military products from Turkey."