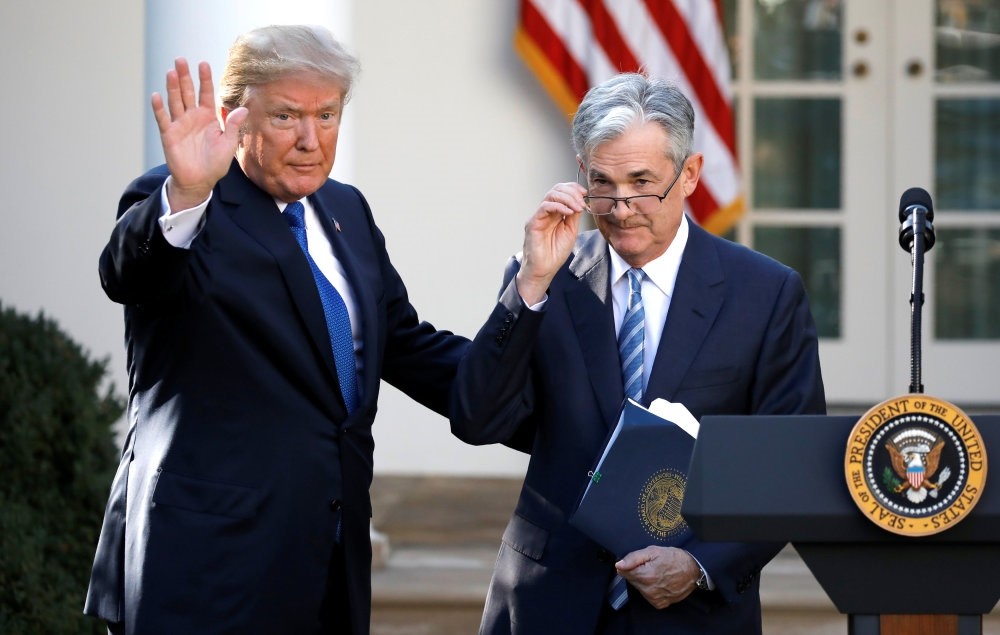 U.S. President Trump (L) gestures with Jerome Powell, his nominee to become chair of the U.S. Federal Reserve, at the White House, Washington, Nov. 3.
by Associated Press
Nov 04, 2017 12:00 am

Trump's new Fed chair has no background as an economist, but he is expected to sustain current chair Yellen's policy on interest rates with a steadying force for a solid economy but it is still prone to risks

As a choice to lead the Federal Reserve, Jerome Powell defies any recent mold.

He isn't a trained economist. He's produced no trail of research. He built a fortune as an investment manager.

Yet by the reckoning of Fed analysts - those who know him and those who don't - Powell is equipped to lead the world's most influential central bank, presiding over a U.S. economy on solid ground but hardly without risks.

What Powell brings to the position most of all, they say, are a formidable intelligence, an appreciation of intellectual diversity and a gift for forging agreement. And in five years on the Fed's board of governors, he has schooled himself in monetary policy while becoming a specialist in areas from banking regulation to the U.S. payments system.

A moderate who is expected to follow the cautious approach to interest rates of the current Fed chair, Janet Yellen, Powell could serve as a steadying force for the U.S. economy as well as a unifying figure among the central bank's policymakers. As a Fed governor, Powell has never dissented from a central bank decision.

"A consensus builder" is how Shai Akabas, who worked with Powell at the Bipartisan Policy Center, a public policy think tank, describes him. Powell was for two years a visiting scholar at the center, where, among other things, he focused on helping avert a crisis over raising the government's debt ceiling, until he joined the Fed's board in 2012. While at the think tank, it was Powell's task to help convince congressional Republicans - successfully, in the end - that a default on the debt would amount to a catastrophe.

Akabas observed that Powell "was always trying to glean insights from those around him - and use that to form opinions."

Educated at Princeton University with a law degree from Georgetown, Powell, 64, known as Jay, spent many years in investment management - at Dillon Read and then at the Carlyle Group. His work there made him one of the wealthiest figures to serve on the Fed board: His most recent financial disclosure form places his wealth at between $19.7 million and $55 million. And based on how government disclosures are drafted, his wealth may actually be closer to $100 million.

Yet those who know him describe a man of unshowy modesty and collegiality, with little discernible pretension. Earlier this year at Reagan National Airport, Matthew McCormick, a government economist who was traveling with him, said he watched Powell carry a car seat and luggage for a family he saw was struggling to make a connecting flight at Reagan National Airport.

At the Bipartisan Policy Center, Jason Grumet, who founded the center, recalls that the organization didn't know what to expect from Powell, who had just finished several lucrative years at the Carlyle Group and had earlier held a high-level Treasury Department post. Yet Powell was content to take an unassuming office near the photocopier with a view of an alley.

"Jay dug in with the intensity of a young analyst," Grumet said. "He was like a junior staffer."

His work at the Bipartisan Policy Center followed later in his career, and it led to his nomination by President Barack Obama to the Fed's board.

In contrast to Powell, his predecessors Bernanke and Yellen were nationally distinguished economists before their Fed chairmanships, with decades of research, papers and books attached to their names. In theory at least, they came to the Fed job prepared to lead the central bank's response to unforeseen economic crises. No one knew, after all, that Ben Bernanke would have to endure the stomach-churning threat to the financial system that forced him to preside over a raft of emergency actions to save the largest banks and, by extension, the economy.

What colleagues do know about Powell is that he won't likely hesitate to rely on colleagues or advisers with deeper expertise. He is described as someone who believes deeply that differing opinions and backgrounds can help build common ground in public policymaking.

In a speech last year, took note of the value of having 12 Fed branches spread across the country. He suggested that the regional differences provide an array of views to help produce superior monetary policy. "My strong view is that this institutionalized diversity of thinking is a strength of our system," Powell said . "In my experience, the best outcomes are reached when opposing viewpoints are clearly and strongly presented before decisions are made."

Powell, who projects a serious demeanor, is known for a lighter side as well. Friends say he strums rock and blues numbers on the guitar. He has been an avid golfer despite back pain.

He will even bring a dose of show business with him to the Fed. His wife, Elissa Leonard, who has worked in the film industry, is executive producer of a movie titled "Ladies in Black."

IMDB describes it as "an alluring and tender-hearted comedy drama about the lives of a group of department store employees in 1959 Sydney (Australia)."

Alan Tonelson, a longtime commentator on international trade, attended Princeton with Powell. In the fall of 1971, while playing cards with a group of students in a freshman dorm, Powell suggested they listen to an album by a group called "Dan Hicks and His Hot Licks."

"Dan Hicks sucks, " Tonelson shot back. Four decades later, Tonelson reconnected with Powell after his appointment to the Fed. Powell looked at him and deadpanned, "Dan Hicks and His Hot Licks, huh?" "I was blown away," Tonelson said. "That stuck with him."