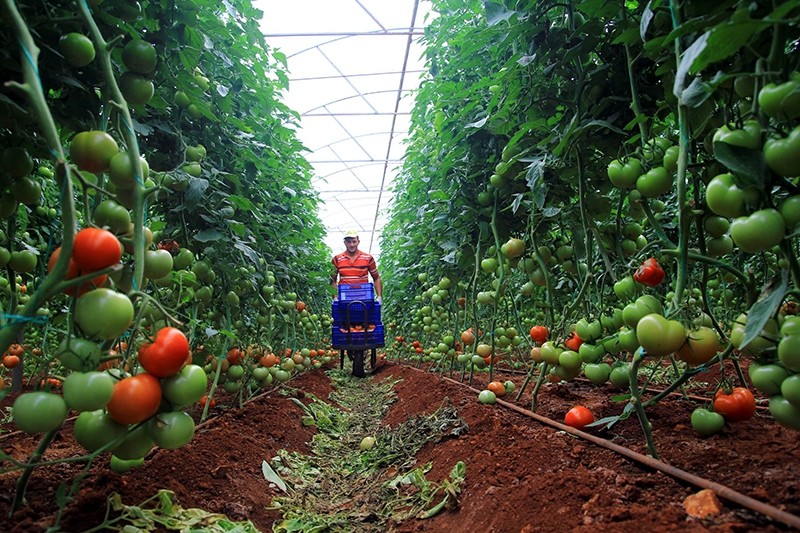 The protracted negotiations to lift the ban imposed on Turkish tomato exports to Russia, which have topped the agenda of Turkish-Russian talks for a long time since January 2016, recently yielded positive results, with Russia agreeing to import Turkish tomatoes on a limited basis. With the lifting of the restrictions, the first shipment to Russia has been made from the Bergama district of İzmir province.

Tomatoes harvested in Bergama's Agrobay greenhouses were loaded onto trucks and sent to an unacknowledged leading retail chain in Russia's St. Petersburg.

The tomatoes will be delivered to 750 grocery stores across the country.

Speaking to Anadolu Agency (AA), Agrobay Greenhouse board member Arzu Şentürk said the board signed a contract to export 5,000 tons of tomatoes this year with Russia, adding that they had delivered 10,000 tons of tomatoes prior to the jet downing crisis of November 2015.

Şentürk said the reopening of the tomato export market is good, noting that the political developments surrounding the jet downing crisis had resulted in the halting of shipments to Russia, despite the signing of a sales contract with the Russian grocery chain last year.

Explaining that Agrobay Greenhouse penned the agreement with the Russian market chain, one of Russia's biggest discount store chains, and sent the first product, Şentürk recalled that the Russian market had been the biggest market for Turkey since 2003, adding that the 10,000 tons of tomatoes delivered prior to the jet downing crisis were part of the 14,000 tons in annual production formerly slated for export to Russia prior to the crisis.

"Since the closing of the tomato export market to Russia last year, we have increased our domestic market share to 65 percent and found new customers in Europe. Even though Russian buyers want a big portion of our capacity, we will not give them," Şentürk said, adding that Agrobay Greenhouse has made a deal for the export of 5,000 tons of tomato and aims to increase this number to a price-oriented 7,000 tons.

"According to market owners in Russia, tomatoes were sold for $30 per kilogram last year, which is why consumption was very low. I think that this import will be good for Russians as well, considering that we made the first shipments at $1.50 per kilogram," he said.

Explaining that Agrobay Greenhouse has turned down the offers of some Russian companies for joint investments in the process, Şentürk stressed that they will maintain the policy of reducing Turkey's dependence on the Russian market in the future and take measures to expand in markets across the Middle East and the U.S.

Russia, which is Turkey's largest market for tomatoes, halted imports due to the crisis that began after Turkey shot down a Russian warplane in November 2015. After rapprochement between the two countries, the two parties reached an agreement on the shipment of Turkish tomatoes to the Russian market with an annual capacity of 50,000 tons.

Turkey's fresh fruit and vegetable exports to Russia, excluding tomatoes, in the January-August period of 2017 showed an increase of 150 percent to reach $259 million, indicating greatly-improving bilateral economic relations between the two countries.

Meanwhile, it was reported that Russia will possibly seek to import a special type of apple harvested in the southern Turkish city of Kahramanmaraş in a special region known as "the Mediterranean Siberia." The Göksun apple, which is named for the region where it is grown at an altitude of 1,350 meters, is considered a high-quality apple in terms of its taste, color and aroma, and because of the high fluctuations in daytime and nighttime temperatures in the area. The fruit is currently exported to Saudi Arabia, Jordan, Yemen and Iraq. Now, Russia and India have indicated demand for Göksun apple imports.

Russia's Agriculture Deputy Minister Dzhambulat Khatuov said Thursday that all problems regarding the supply of agricultural goods from Turkey have been resolved.

The Russian government announced that limited tomato imports from Turkey would be allowed starting November 1.